5 Spooky Games to Get You In The Halloween Mood 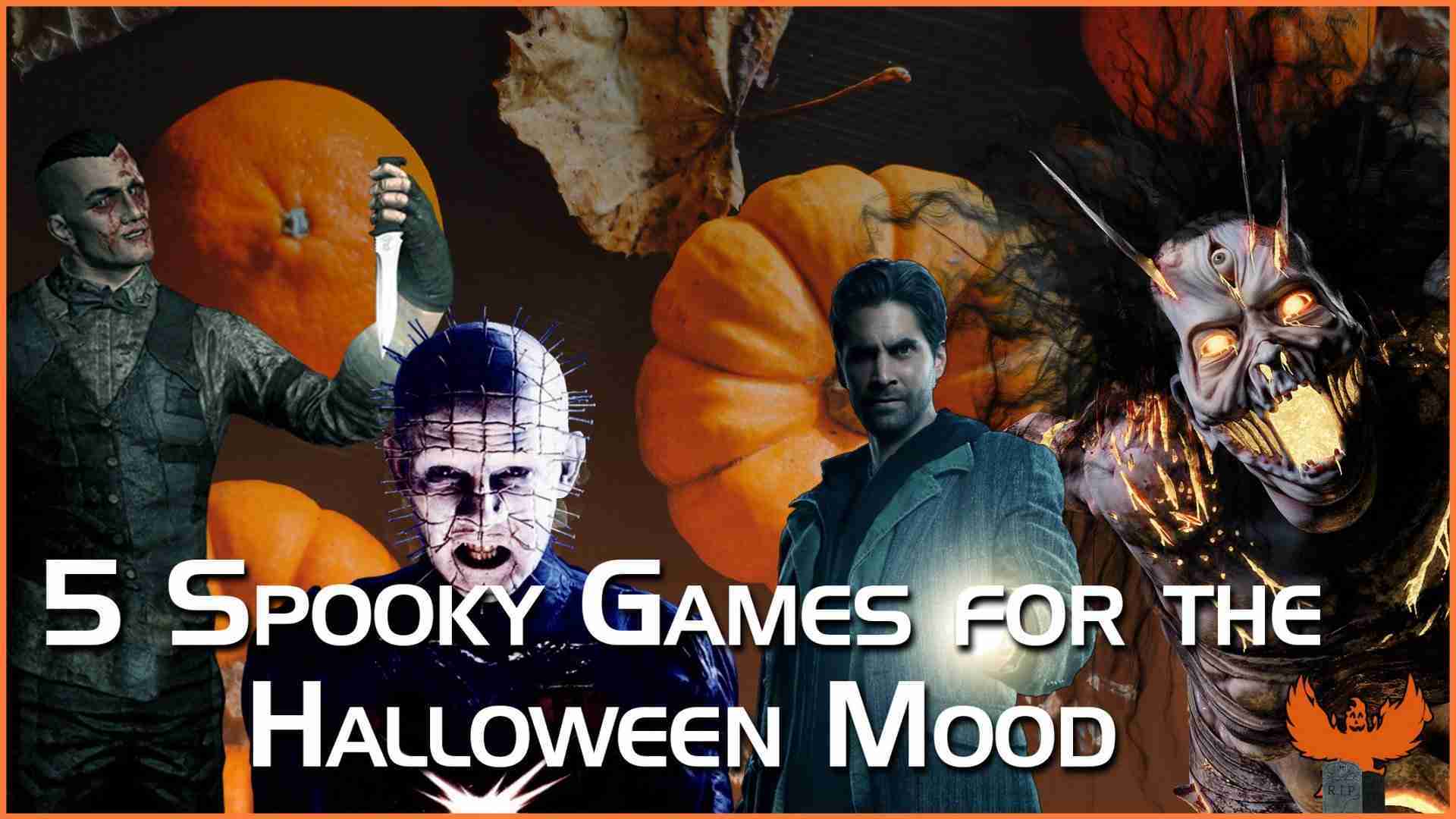 Another year, another October, and do you know what that means?

Spooky games are in season!

So to celebrate Spooktober I would like to give some of my must plays in the Horror game genre that if you haven’t checked out, you definitely should!

This was one of my all-time favorite games to grace the 7th gen consoles on the Xbox 360 and I could not get enough of it! A psychological thriller where you play, of course, as the one and only Alan Wake, a successful writer that hasn’t written anything in two years on vacation with his wife Alice. You find yourself in a small quiet town of Bright Falls in a cabin on Cauldron Lake where you find shortly after your arrival that your wife has gone missing and start your search for her. You start to feel like you are living in a novel as you hear Alan Wake narrating everything that is going on around you as you dig deeper into the depths of Bright Falls.

This game kept me hooked from beginning to the end when it first launched and I’ve played it more than once since the game was released over 11 years ago! With the remaster version now out, there is no better time to experience one of the best psychological thrillers in the market! This is also the first time that the game has launched on the Playstation platform! Alan Wake Remaster is available on 10/5/2021 on Xbox, Playstation, and PC.

RE 2 on the original Playstation was an absolute classic and the nostalgia hits hard when I look back to when I was a kid, absolutely scared out of my mind as my friends and I played through this game late at night in complete darkness. From roaming across the torn streets of Racoon City to exploring every hallway in the RPD, it was absolutely terrifying. Now back in 2019 we got the long-awaited and requested remake to one of the biggest staples in the Resident Evil series. The RE Remake is the perfect example of what a remake can do to bring older games to a brand new generation. While staying true to the identity of what makes a Resident Evil game a Resident Evil game but is also able to modernize its gameplay mechanics to bring the gameplay up to today’s standards and able to be enjoyed by a wider audience.

You follow two characters, Leon, one who is a rookie cop on his first day on the force (what a warm welcome he gets) and Claire Redfield, the sister to Chris Redfield, with her search to find her missing brother who was a former STARS member and used to work for the RPD. The journey that these two characters go through will keep you hooked from start to end. Eerie environments, great boss fights, smooth gameplay mechanics, and terror around every corner; the RE2 Remake is a must-play for the Spooky Season! RE2 Remake is available on Xbox, Playstation, and PC.

Outlast is not for the faint of heart. You play as an investigative journalist who is researching a psychiatric hospital located in Colorado. In doing so, Miles Upshur (the game’s protagonist) finds himself trapped in the hospital overrun by homicidal patients and must push through to find a way to escape the horrors that fill it.

Equipped with only a camcorder and no means of a way to defend yourself, your survival in this game is solely based on hiding from your enemies and sticking to the shadows. Most of the hospital is covered in darkness and the only way to see your way through is to use your camcorder’s night vision mode; which also requires you to find batteries throughout the hospital. Outlast does a great job at keeping the tension on the player as nowhere is truly safe and once you get found your only option is to run like hell to find a place to hide.

Outlast is terrifying and, in my books, is another must-play to celebrate the Halloween season. Putting headphones on and turning off all the lights will set the mood for more of a spooky good time. If you are interested in this game it is available on pretty much all platforms, Xbox, Playstation, PC, and even the Nintendo Switch!

I will include all three of these games (so far) to change up this list a bit: Man of Medan, Little Hope, and the soon-to-release House of Ashes (releases 10/21/2021), are all made by Supermassive Games. The studio that was behind Until Dawn on the Playstation 4. If you’ve played Until Dawn, you will already know kind of how these games play. They are all about the choice you make in the game having a Butterfly Effect on the characters in the game; so much so that your actions can solely determine whether a character lives or dies. If you are familiar with the TellTale gameplay style, you’ll easily pick up on how these games play.

Most of these games are set up to be on the shorter side. So if you’re looking for something spooky but don’t want to get too invested, then I would highly recommend these titles. The thing that I like about these games is their “Movie Night” game mode where you and up to five other people can control certain characters in the game bypassing the controller around when it is each person’s character’s turn. I found this mode very unique and fun (this mode was how I played Man of Medan) and it is available in the other two titles as well. They do also have an online mode where you and another player can pick certain characters to play as and a Single Player mode as well.

All three titles are available on PC, Xbox, and Playstation platforms.

While Dead by Daylight was originally released back in 2016 on PC, the PS4 and Xbox One versions in 2017, and on the Nintendo Switch in September of 2019. The studio just celebrated its fifth anniversary back in June! Dead by Daylight is an asymmetric survival horror game where four survivors are tasked with escaping the grasp of a killer in set maps by fixing generators to power up doors that lead to their escapes once opened.

While this game has tons of original content they have also done quite a bit of licensing deals to bring in characters such as Ghostface (Scream), Micheal Myers (Halloween), Pyramid Head (Silent Hill), and more alongside their Survivor counterparts to their respective series. There is no better time to jump in than now! With all the new additions of killers, survivors, and maps alike, there is tons of content for you and your friends to stay busy with this Halloween season; with the new addition of crossplay, you can play with any of your friends no matter the platform that you are on.

You choose to play as either the Survivor where you and three others work together to escape the map, or you could play as the killer and hunt down the four survivors to sacrifice them to “The Entity.” Also to note, the game is updated for the Xbox Series X/S and Playstation 5 to take advantage of the new hardware for enhanced gameplay. Dead by Daylight is available on PC, Xbox, Playstation, Nintendo Switch, Mobile IOS/Android, and even Google Stadia!

Well, that’s it for me, today folks, I sincerely hope you enjoyed the list, and remember to stay Spooky!

While this list is not a review on all of the horror games I’ve enjoyed over time (maybe I’ll go over more titles in the future), some honorable mentions are; The Evil Within 1 & 2 [Tango Gameworks], Silent Hill 1-3 [Team Silent], Dead Space 1 & 2 [Visceral Games], and Resident Evil Village [Capcom Co.].