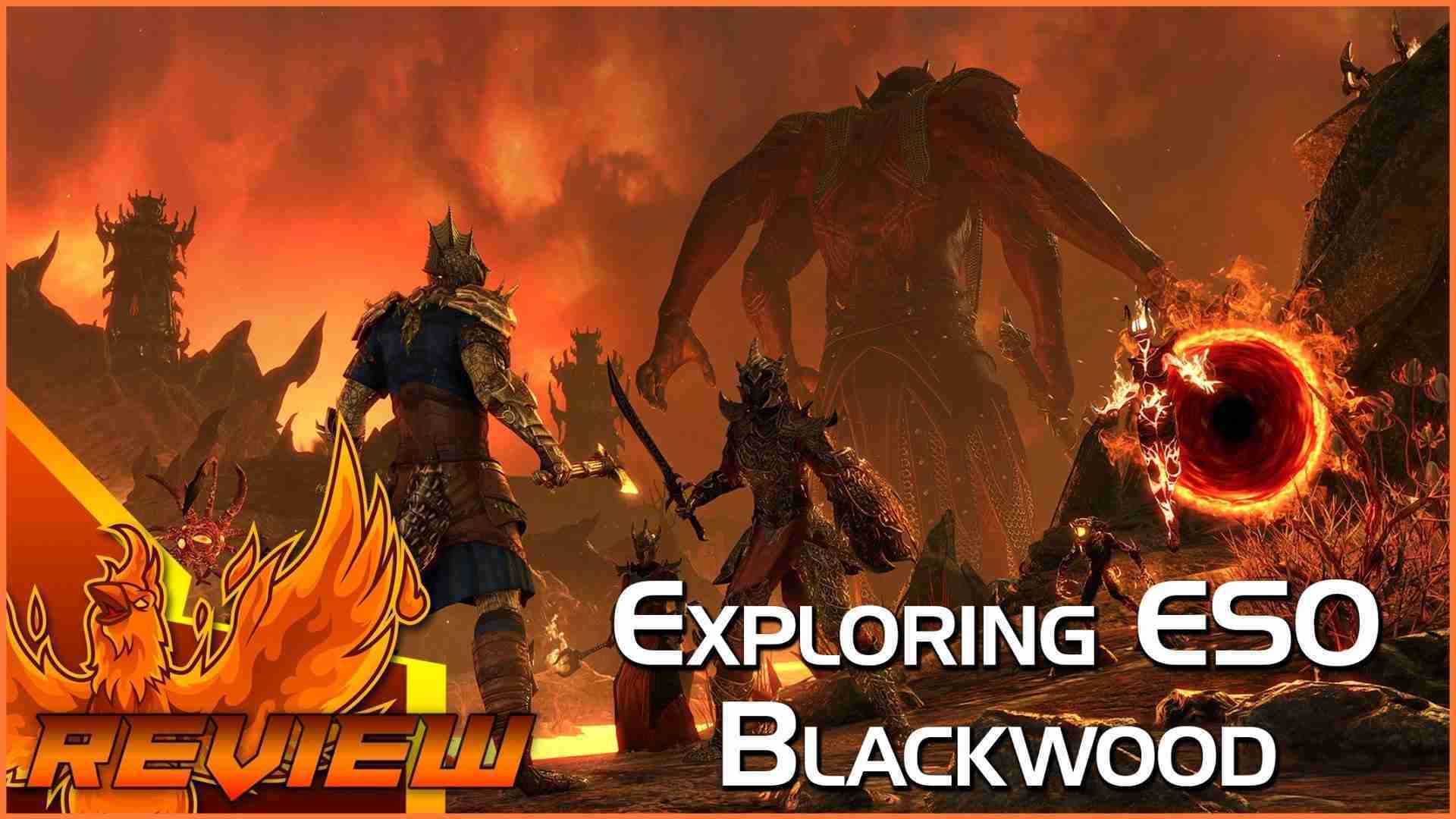 Welcome to The Elder Scrolls Online Blackwood! The fifth expansion of ESO and the first expansion I have ever played in this long-running and legendary MMO. In this Exploring ESO series, I’m going to dive into all the already out expansions of The Elder Scrolls Online. I will also dive into base game areas and other fun things I find. Join me on my Journey! Additionally, ESO is also available on PS4, Xbox, Stadia, PC, and Mac and I played on PC via Steam.

Playing through the expansion took me about 40 hours to get through the main quests and get stuck. I then went to find my companions, and power leveling them with side quests to help me finish the main quest. I’m also a solo player so most things will of course take me longer than groups. This year is the Gates of Oblivion and at this time only 3 of the 4 goodies have dropped. That being The Flames of Ambition DLC, The Blackwood chapter, and The Waking Flame DLC. There is a final piece of the expansion to drop in Q4.

Blackwood is an area that, from my knowledge, was first seen in The Elder Scrolls 4: Oblivion. Blackwood is also the great swamp that borders Khajiit Elsweyr on the west and Argonian Black Marsh on the east. ESO: Blackwood is the latest expansion and area that players can dive into right now. Blackwood is set 800 years before the events that happened in Oblivion.

What Was my Experience with Blackwood?

Blackwood was an interesting place to wander through. I don’t remember the area from Oblivion. It’s been years since I sat down and played Oblivion, to be honest. It’s a water-based area of the MMO and blends perfectly with Shadowfen next to it. Shadowfen is the northwest region of Black Marsh of the Ebonheart Pact. The main island you’ll be exploring is surrounded by Lakes, Rivers, or Swamps. You’ll also be visiting a lot of familiar places like Leyawin and Gideon.

Like all the areas you explore in this game ESO: Blackwood has so many things to do. From radiant quests to world bosses and a bit of everything in between. The only things I have yet to complete at this time are scury and excavate all the objects to be found and make it all the way through the entire deadland portals that open up when you’re roaming around. I’m just not powerful enough for those portals yet. I also have yet to try and tackle the Rockgrove trial. Which is the new 12 person trial. Thanks to the awesome community that was friendly enough to help with world bosses.

The main story follows the path of discovering the betrayal in The Longhouse of Emperors and helping the ambitions. The story from the expansions weaves together because let’s be honest it’s always some deadric prince up to something. Towards the end of the storyline, you get to fight an ambassador of the big bad Mehrunes Dagon himself while he causes mayhem in the background. It leaves on a bit to be continued ending with you only finding 3 of the ambitions with 2 surviving. There is tons of exploring, fighting and story gathering to do all while trekking across the land with your new companion.

I got both the companions and while you can only have one follow you at a time I like to switch them out every so often. Although my favorite is Mirri. This new feature is something I really can’t wait to be expanded on. Like companions that are more neutral or dark brotherhood-like companions. The 2 you get Mirri and Bastian are more “good player” leaning. They don’t like any dark brotherhood activities and you’ll lose respect if you do stealth kills, enter the sanctuary or murder-related crimes. This may not be a problem for most however you are forking over the cash to play blackwood you more than likely have the Dark Brotherhood or other crime DLCs. The companions can also be missed if you don’t know where to look or if you dive into the main storyline before don’t some side quests. They certainly help with fighting and getting out of tight jams. Definitely better than some AI companions from other games I dare say even better than some companions you get in the main Elder Scrolls games.

It doesn’t matter what level you are either, Although you may come to a point where you need help you can grab your companions. It was fun coming across the adoring fan and here about all his travels while waiting to be rescued by you. *Spoiler* In the end though he did end up dying and you get to talk to his ghost and you do get an achievement for that.

Overall Blackwood was a perfect reintroduction into The Elder Scrolls Online. It had enough from the game I knew and was my first into the series for me to feel at home. It also had a great storyline, tons to explore, and plenty of reasons to keep coming back. I can’t wait to see what the rest of the year is going to bring and what future expansions are going to be available.

Why Should You Be Playing ESO: Blackwood Right Now?

Most of us have played most if not all of the Elder scrolls games and thought I want to explore all these worlds in one game. ESO is that answer. It’s a great tie-over if you have already played the Elder Scrolls games but want to explore those areas in a new way. Revisit areas you’ve spent years in with a new twist. Especially Blackwood. While there are now plenty of familiar locations in ESO like northern Skyrim and Morrowind, Oblivion was my first and best memory of the Elder scrolls.

There are a few new mounts, pets, outfits, and other goodies that are available in the crown store. They are also available if you get the Collector Edition or upgrade. Some of the goodies are a Battlefield Nightmare Senche Mount and Jewel-Feathered Sep Adder Pet. There is also a Deadlands Gladiator Outfit Style just to name a few. For those interested in diving into the story straight away, a free prologue quest is available now. It will give players a taste of what’s happening this year. Seriously go dive into ESO if you love the Scrolls and MMOs you won’t be disappointed.