The Witcher 3 PC Release Has A Problem With Mods The Smash World Tour & Panda Drama Timeline Games to Frighten You | Cogs In A Machine Ep.42 Evil West Review (Xbox Series X) Turn-Based Fest 2022
To say there was a bit of a stir today is an understatement. Many people believed the rumored Xbox June event has been moved to August. This rumor started when Jeff Grubb, who compiled a ‘Summer Games Mess’ list featuring all of the upcoming digital gaming events. 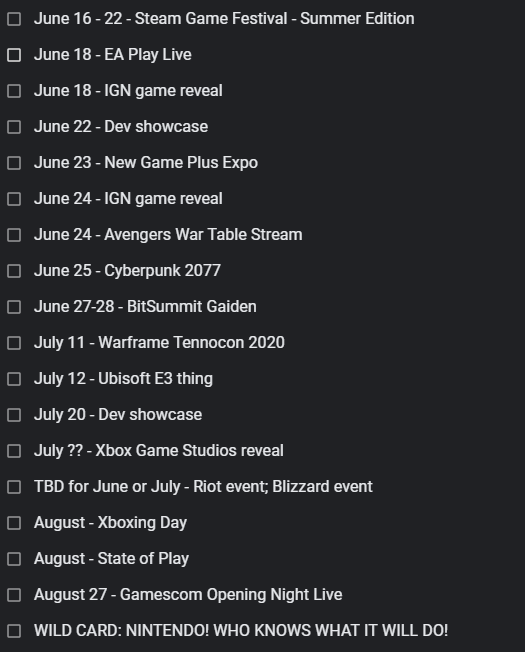 According to Jeff and others, Microsoft was set to have an event in June which most believed would be a show dedicated to hardware and the possible reveal of the highly rumored Xbox Lockhart. However, according to Xbox exec Aaron Greenberg, this is not the case. In a tweet he stated;

We have not pushed anything back, our plan remains to have our next digital show in July and teams are working hard on that.

We have not pushed anything back, our plan remains to have our next digital show in July and teams are working hard on that. https://t.co/e09NcRpVcC

This tweet reads to me that there was never an actual June event only a news release. It seems that Microsoft only planned to have actual events in July and beyond. We will see how things actually turn out but it’s definitely an interesting time. What do you want to see from Xbox moving forward? Let me know in the comments section below! Last;y. Stay tuned for more from Lv1 Gaming! <—Random Article | Random Article—> Leave some suggestions on what we can do better or change. Are you interested in writing, editing or just being a part of Lv1 Gaming? CONTACT US HERE! Be Superhero and Like, Share and subscribe to the YouTube channel. Go Tomb Raiding and give us a follow on Twitch as well! Twitch.tv/Lv1_gaming Would you kindly follow us on twitter at @Lv1Gaming Also follow our Facebook page!
What’s your Reaction?
+1
0
+1
0
+1
0
+1
0
+1
0
+1
0
+1
0
Facebook Twitter Email
👁️ 61

The Witcher 3 PC Release Has A Problem With Mods