Loop8 Launching In June Forspoken Review – A Fun & Flawed Game Amnesia The Bunker Is Delayed QUBE 10th Anniversary – A Deeper Look Star Wars Jedi Survivor Is Delayed Till April
Recently, I was able to have the pleasure to review the long-awaited installment to the Streets of Rage series with Streets of Rage 4. Developed by a team of between Lizard Cube & Guard Crush Games. Streets of Rage 4 takes a more modern approach to a classic series. Continuing ten years later after the events of Streets of Rage 3, Wood Oak City falls prey to a new syndicate who wants control of the city again. 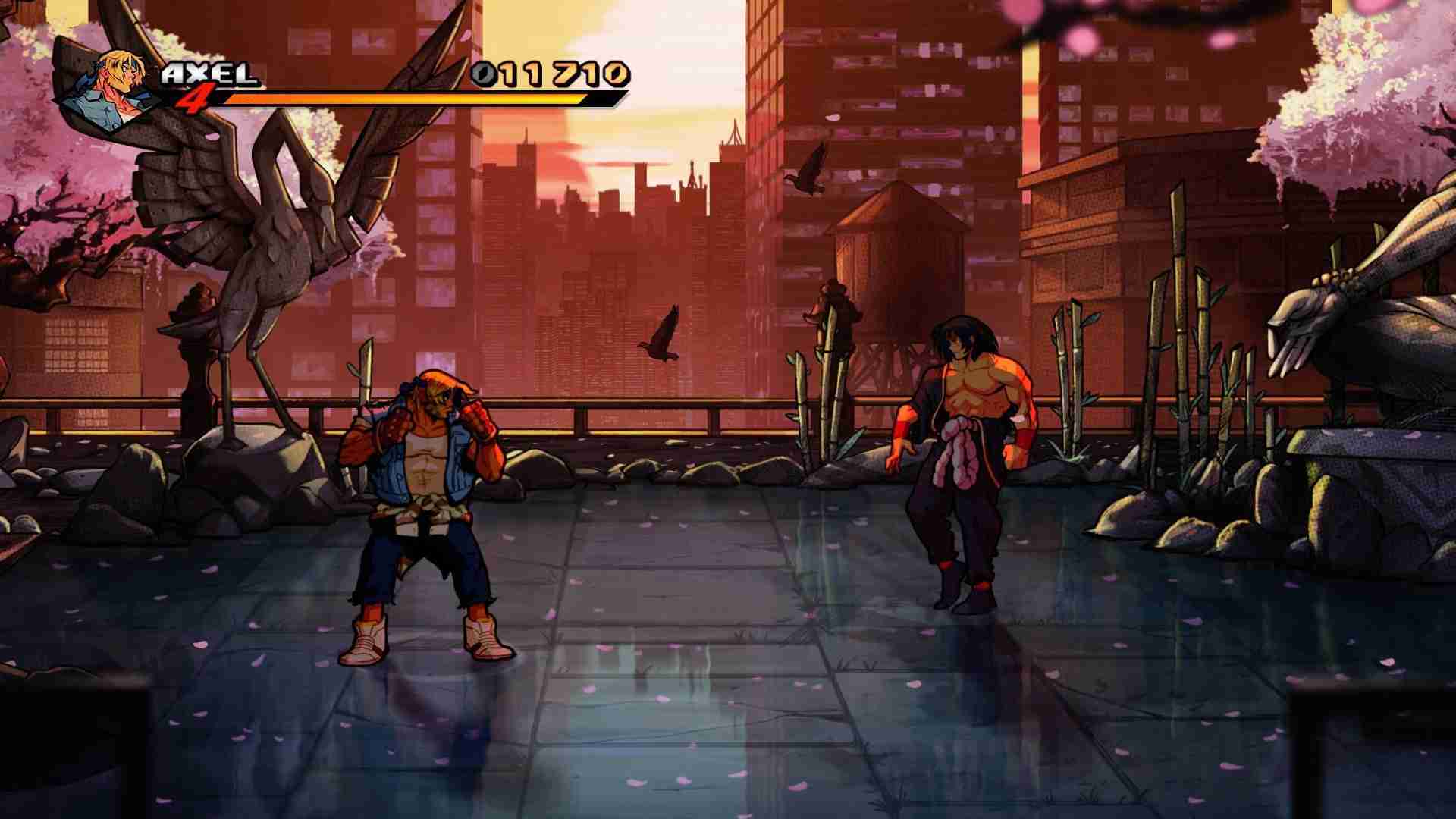 Graphically, Streets of Rage 4 has both a beautiful and fluid art style that looks gorgeous in motion. At first, I was a bit hesitant when the art style got revealed. As this was a game that was trying to capture my youth and I immediately wrote it off (at first) but in action, I fell in love. It wasn’t the immediate pixel style that I had wanted but it was better. Dot Emu even went the distance to supply fans of the original trilogy with pixel styled graphics for the fans & purists alike. Giving the best of both worlds and capturing the love of the series. I was impressed and loved every single minute of the art style. The graphics get an 8.5 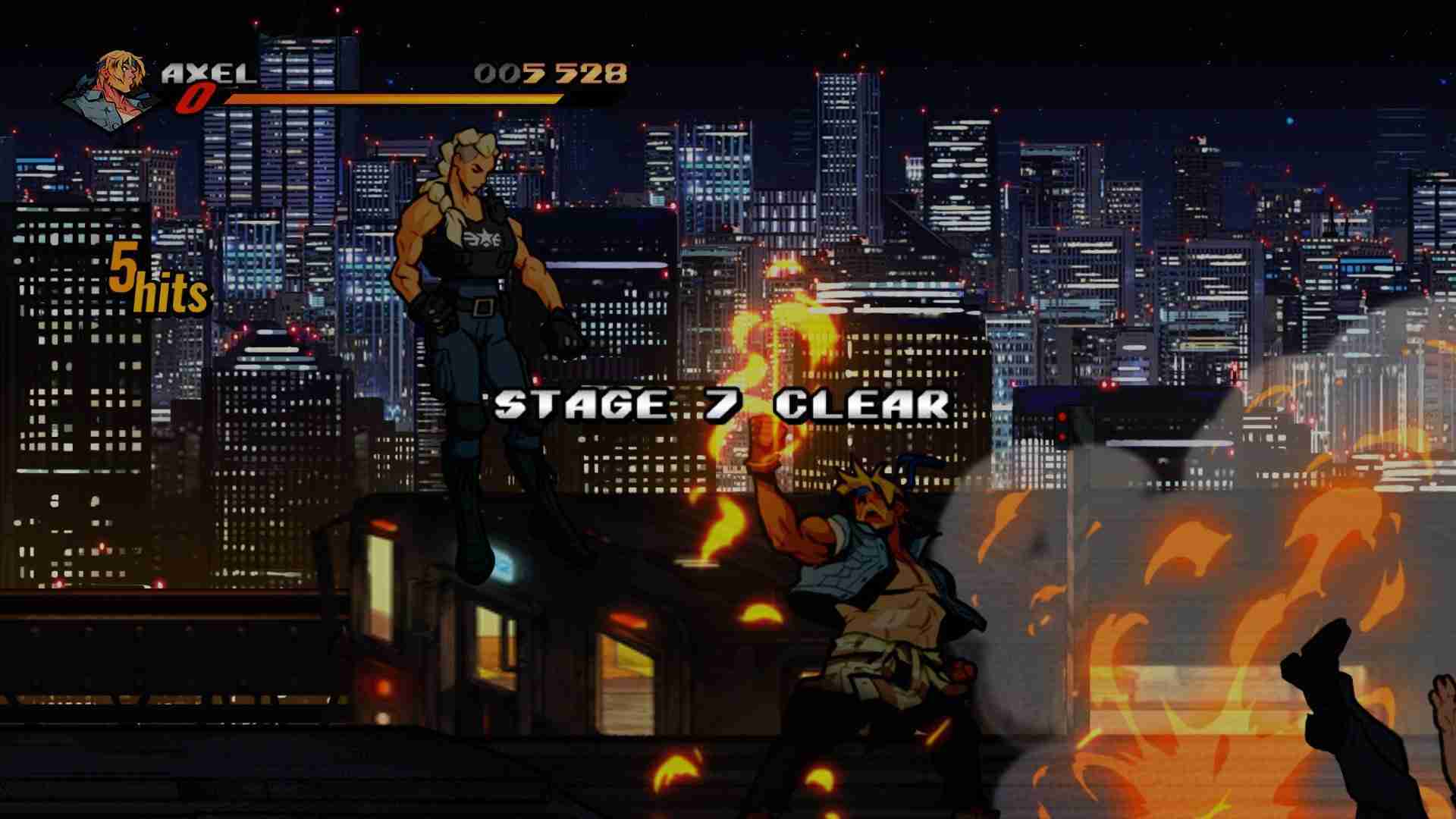 The gameplay of Streets of Rage 4 still gives you that classic feel of the game while both improving and lacking in certain design choices. Streets of Rage 4 does a fantastic job of capturing that nostalgia and keeping the gameplay as simple as possible. Also giving you a bit of freedom in combo selections. However, nostalgia is what hurts Streets of Rage 4 at the same time. The lack of a dash on characters, supers still hurting you, and no block to stop incoming attacks. While fun, it has a lot of room for improvement and could be way better in a few areas. The gameplay gets a 6.5 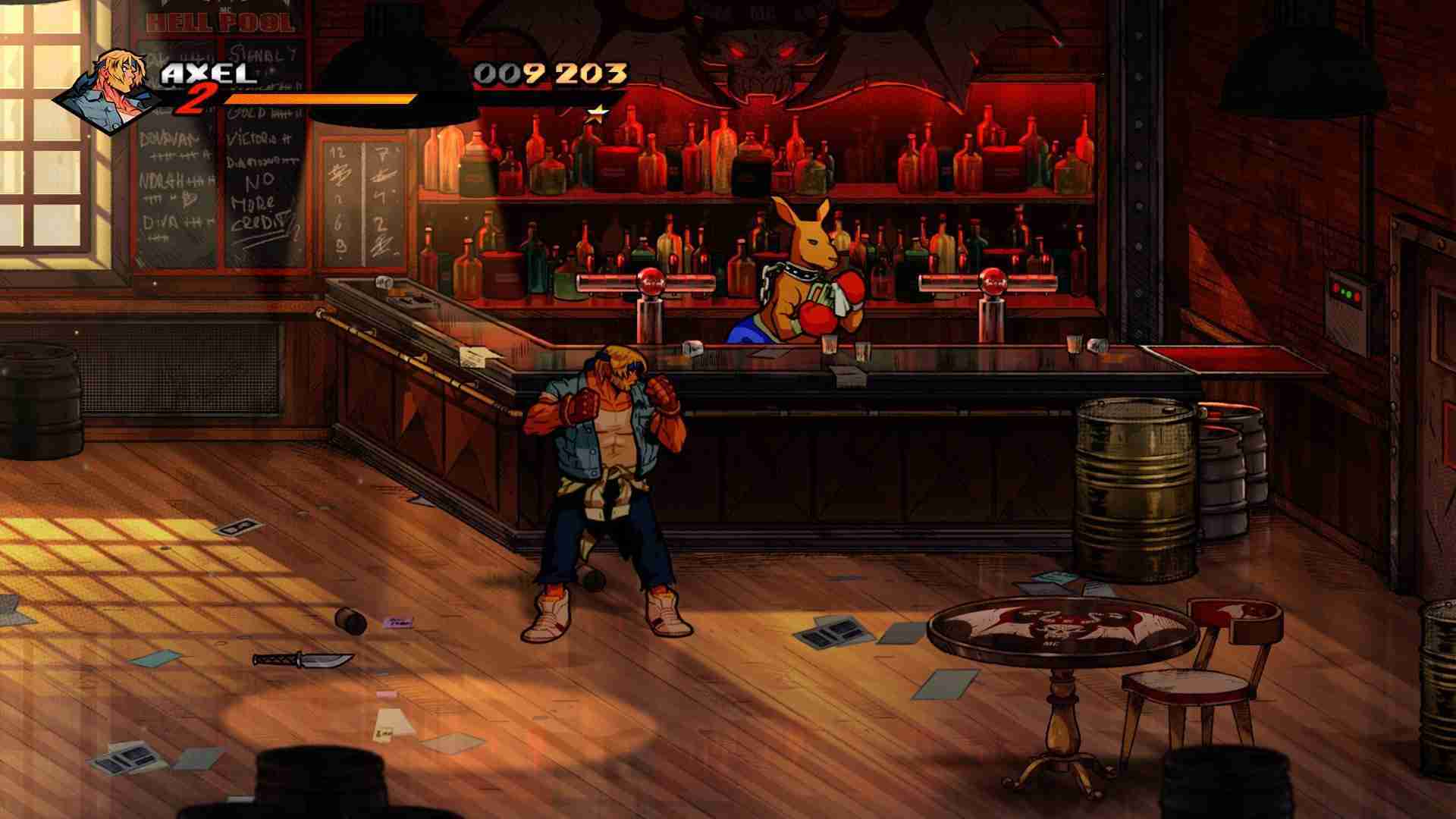 The audio in this title is phenomenal. I fell in love with the music from the start menu to the end of the game. It ranges from smooth jazz to uptempo techno to hard rock in a matter of seconds. Not only that, but you also have the classic music from the previous games as an option as well. The selection and range amongst what’s being given are easily one of the best additions of Streets of Rage 4. As level to level, your head will nod to whatever is playing. The audio gets a 10. 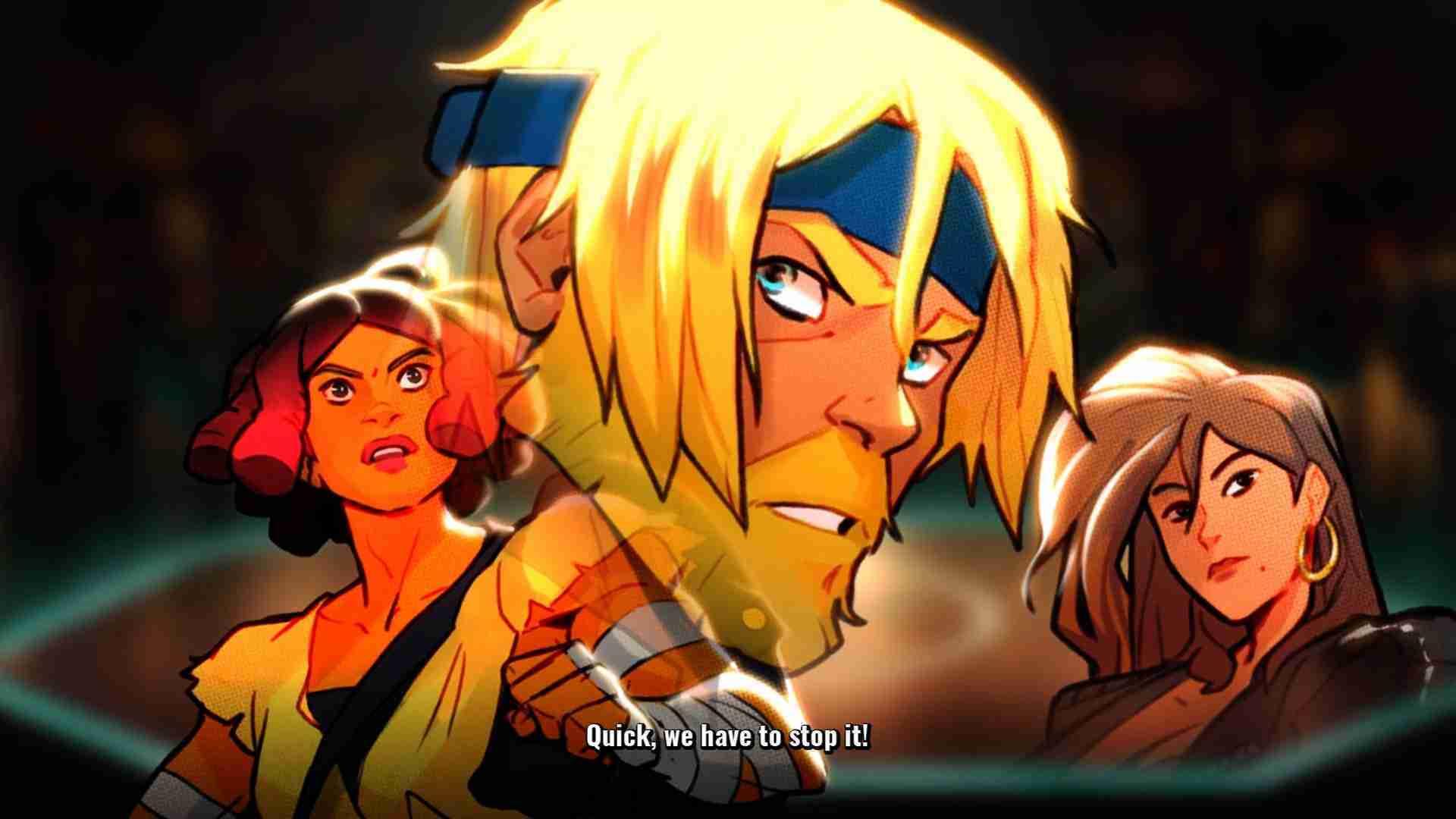 The Story of Streets of Rage 4 isn’t the best. It picks up and continues off the previous titles and gives a proper explanation of whats going on. However, the villains are pretty lackluster and the in-between explanations of who certain characters are and the purpose & drive behind them aren’t answered either. It was great to see the passing of the torch of the old characters working together with the new. But, it’s a lot more questions that leave to be desired than answered truthfully. The story gets a 5. 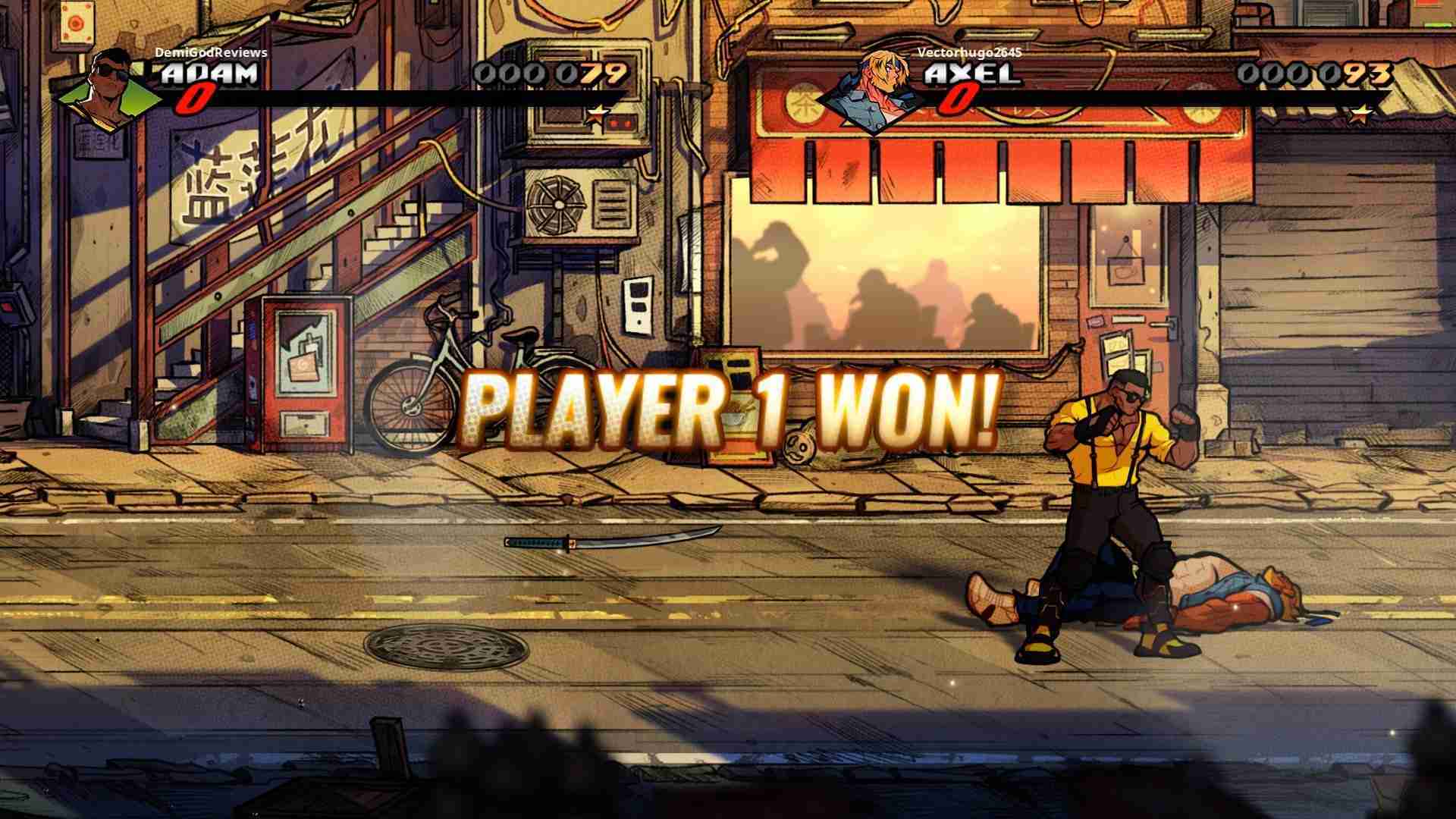 Honestly, I was a bit concerned about Streets of Rage 4. I didn’t expect it to live up to the name as it had some huge shoes to fill. It’s almost like your favorite classic movie being remade and you’re running with doubts before you see it. I felt that way as at first I didn’t know what to expect. But when it came time to finally sit down and play. It felt like I was arguably playing the best Streets of Rage title possible with this latest one. It’s like a love letter to fans who’s waited years to get their hands on a new one. It picks up the greatest aspects of the previous games while having some missteps of its own with the dated gameplay and too simplistic story. However, it makes up for that with how well the presentation, music, and multiplayer is done. It sticks to a tried and true formula for both newbies and fans alike and it works. Streets of Rage 4 delivers on a promise not on nostalgia but on a well-done package and its one not to miss.