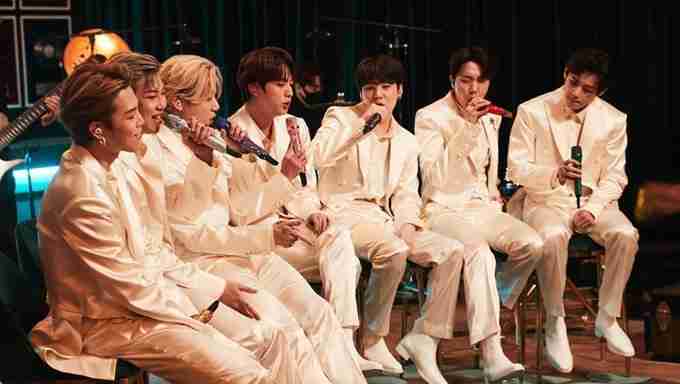 That’s the sound of being catapulted into icon status.

Bangtan Seonyeondan is now in the official prestigious club of MTV’s Unplugged.  “And when you mention Pac, Biggie, or Jay-Z, don’t forget Weezy baby!” The Bulletproof Boyscouts are just that.

They were the underdogs of the Korean Pop world.  No major label to back them, a small independent in a garage.  The members hail mostly from the South Korean countryside, not the distinguished capital of Seoul.  All were recruited with individual talents that had to be honed to create a homogenous group.

What’s distinct about BTS’ delivery, is their artful representation of what they sing and feel.  So, the show opens up with the song “Telepathy”.  The setting is the ultimate bachelor pad for a group of guys in their twenties (most K-Pop groups spend a lot of time living in a dorm together).

It’s a whole life in one room, as any ideal pandemic room should be.  There are arcade games, a nice couch, even a small scooter bike, and neon lights display the title of their new album “BE”.  One member is sitting on the couch, playing a video game on the TV, others at the foosball table, one riding the bike as he sings to the camera; just college-age guys hanging out.  The breaking of the 4th wall.

They get their close-ups (they’re all UNBELIEVABLY pretty) and then just groove into the song, and dance around the room together for the finale.  The song is a light introduction to the show, speaking to you, in your room, from theirs.  Just a call from a close friend to check-in.  “How are you?  What have you been up to?”

BTS always knows how to invite you into their mind, and you realize, yours is not much different, which is called relatability. And they’re really, really good at it.  Between the songs, they explain in their native Korean tongue (thankfully with subtitles), as well as in English, the story behind the creation and meaning of the songs, performances, and what life has been like away from the spotlight.

We also happily welcome back member SUGA— the band hasn’t been able to perform as a whole unit for the first time in months after he had to miss performances due to shoulder surgery.  If you watch their live performances during that time, they danced leaving his spot fully open and wrapping their arms around each other with the gap that was him. I saw a YouTube comment once on one of their videos, that said, “7-1 does not equal 6, it equals zero.”

My only complaint about this whole episode, it was way too damn short.

A half hour, with commercials, after each song.

Next up is “Blue & Grey”, written by band member, V (birth name Kim Tae-Hyung). A melancholy ballad about the ups and downs of the isolation and separation of the pandemic, being away from ARMY. It’s not a secret how much they are devoted to their fans.  They are true performers who shine best when on a live stage.

The setting is similar to a scene from “What Dreams May Come”.  It looks like a literal dream with hues of flowers, water, and sky; all confined to a dollhouse room with one window and door. The beauty and tragedy of a creative mind that cannot fully express itself.  Ethereal movements of the members as they walk amongst the walls.  Sometimes looking upward, searching, in pensive thought.  Some moments with heads bent, deep in the abyss of unknowing and solitude. What we all feel during this time.

We move into a sudden, delightful, surprise of a cover of “Fix You” by Coldplay, the first performance without a theatrical background. Honestly, it’s my preference when they perform, when any artist performs.  Only one member, RM (Rap Monster, birth name Kim Nam-Joon), the designated leader of the group, is mostly fluent in English.  He is usually the translator for the English language interviews, although all the members have been steadily working on it on their own.

V has already written and recorded some of his solo work in English. They are all dressed in grey suits, with white socks and black shoes.  A very fitting, early Beatles vibe, mixed with the Korean school-boy uniform.

This tribute was especially heartfelt and frankly, just a huge geek moment for me (I squealed a little, not gonna lie).  I adore this song.  I remember a friend of mine once told me this song would make her cry every time she heard it.  It was solace for her while dealing with the tumultuous addiction of someone she loved deeply. The song is indeed about loving someone who cannot love themself, and feeling helpless to make it all better.  BTS took it as their own, wanting to make the whole world better, and take the pain away, pain they cannot control.  And yet again, directed it towards the fans.  They would take on what we feel if it made us feel happier.  Because we all want this pain to go away, we all want each other to be truly happy and free again.  There’s something about a boy wanting to be your hero. The forever heroes of our hearts.

The “Fix You” arrangement was spot on, utilizing the rap line of RM, j-hope (birth name Jung Hoseok), and SUGA (birth name Min Yoon-gi), to be the bass vocals. The upper registers were for the main vocal line of Jin (birth name Kim Seok-Jin), V, Jimin (birth name Park Ji-min), and the golden child himself, lead vocalist, and youngest member, JK (birth name Jeon Jung-kook).  The blending of the emotional instrumentation and recreation of the famous strobe light effects Coldplay uses on stage, brought tears to my eyes.  This song is also significant for them based on a story told by SUGA, after they gained the opportunity to perform on the biggest stage in Korea, the dome stadium in Seoul.  He had been there, not long before, as an audience member, and as I recall, it was in fact Coldplay performing in concert.  He watched in awe, making a promise to himself he would one day make his way there.  A full circle moment.

This is another testament to how hard they work, to learn a song completely in English, to reach their fans around the world.  As an “I-ARMY”(International ARMY, those not from Korea), it really is a relief, and dorky pleasure, to hear them sing English lyrics because they want to connect to us also, as much as possible. They like us, they really, really like us!

Next is “Life Goes On”.  Seven bandmates, lined next to each other, on stools, dressed in brown prep school suits, with a BTS insignia as the school patch.  A nod to the “day one” ARMY’s as they wore similar outfits when they first debuted. Despite the typical boy band vulnerability stance, the song is in fact deeply poetic.  Again, another ode to the lost feeling of control due to the pandemic.  The song begins with remembering the shock and suddenness of the world shutting down.  Life, interrupted.  But it is also another personal song to the fans, saying, yes, we also feel trapped, not knowing when all this ends, but don’t give up, we will see each other again, none of this changes what we all have together, we are still connected. In fact, the beauty of the music video is a physical dedication to ARMY.  Set in black and white, the setting is a dream-like state, with the band sitting and singing on a small stage.  In the background, an audience flooded with only the ARMY bomb lanterns that fans carry during live concerts.  One light in each seat, to recreate the atmosphere of their live performances, and to establish that ARMY is never far from their minds and spirits.

Last, but not least, the bombshell itself, their first full English language (and Grammy-nominated!) hit single “Dynamite”.  They are fitted in all white (a nod to the famous wardrobe of Backstreet Boys’ “I Want It That Way”), each with their own colored mics, bedazzled, with a matching earpiece (swag!).

THIS song is what introduced me, as well as most of the world, to one of the best artists I’ve ever listened to.  And what is responsible for my current 14-year old behavior exhibiting itself-I am not ashamed.

I heard this record on a commercial, not knowing who it was.  I had sworn off the K-Pop craze, letting it play in the background, and then sure enough, it caught up to me (eye roll).

When my phone app identified the song as “Dynamite” by BTS, I almost threw my phone across the room.  I knew I was in trouble.  I was a geek for the song, which meant it wouldn’t be long before I became a geek for them, and probably K-Pop in general. And boy, did I geek.  There may be a tattoo, or two, in the works in the near future, just saying (sigh).

This is the song, and music video, that not only got me into their sound, but got them my respect.  The song is a beautiful ode to the one and only Michael Jackson, and The Jackson 5.  Even the music video has the markings of the disco era, with the holographic vinyl cover designs of the Jackson 5 albums.  They reference “Off the Wall” in the lyrics, and incorporate everything that is MJ and his brothers into the choreography.  And the answer to your question is, yes, I have learned the choreo.  You watch it and tell me you don’t want to!

The song was purposely written as an upbeat, “life is dynamite”, nostalgic rhythm to get everyone out of their 2020 funk, and a genius introduction of BTS’ artistry to new international fans.  They have made it no secret how influenced they are by the music of the world, particularly Black music that has reigned supreme in the styles of R&B and hip-hop. They publicly recognize it, honor it, and for that, I will always respect them.  They wouldn’t have a pop industry without it, and they show it.  “Dynamite” is a perfect ending to the show, after all the gloom and doom emotions.  It ends on a high note to keep our hopes up.  The famous catch phrase j-hope uses to introduce himself, but also is basically the band’s motto, is, “I’m your hope, you’re my hope”.

ARMY is an acronym—Adorable Representative MC of Youth. ARMY is also reference to the actual word, and it’s a movement.  They are bulletproof, always fighting negativity and hate, always working to be strong, always working to help others, with their ARMY behind, and alongside them.

Thank you to MTV for solidifying their historic, meteoric rise in the American, and worldwide, music markets.  They truly came from the bottom and are here, taking over, in humility and style.

ARMY’s now wait, with bated breath, for those famous words, “and the GRAMMY goes to….”.