Hajime Isayama, known for his critically acclaimed manga Attack on Titan, had his creation immortalized in his hometown. Hita City in Oita Prefecture, Kyushu, Japan is the hometown of the author. This past weekend, we got to see an iconic moment from the beginning of the series brought to life. In front of Oyama Dam in Hita City, there were three statues placed as part of a crowd-funded effort arranged by local volunteers. It just so happens that the location chosen is where Isayama had his first idea for the now internationally beloved series. 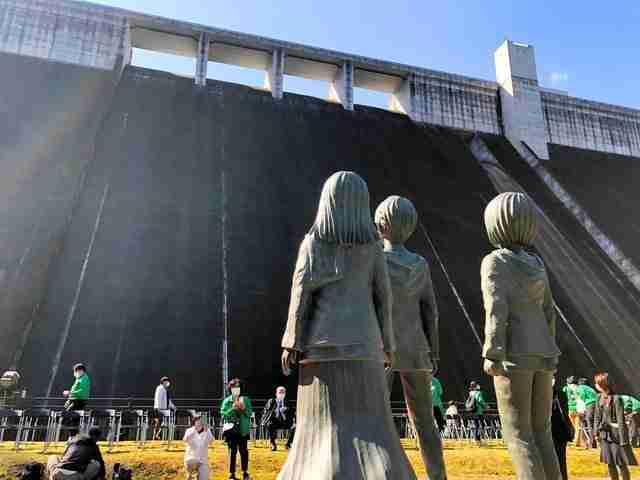 These statues are of Eren, Mikasa, and Armin, as they look up towards the dam itself. This is reminiscent of the moment they watched in terror as an enormous Titan appeared on the other side of what is known as Wall Maria. This effort was done in an attempt to help revitalize Hita City. The ceremony, as reported by Crunchyroll, was due to take place on April 5th, 2020. However, due to the pandemic, it was pushed back until this past weekend.

A fan of the series took some photos of the plaque that now resides in Hita City: https://twitter.com/tSkBoXx/status/1325276986487402507?s=20 This plaque has a message in both Japanese and English. The message in English reads exactly as follows: “Since beginning serialization in 2009, Attack on Titan has left an impact on people around the world. Oyama Town is the hometown of its creator, Hajime Isayama, as well as the place where he first had the idea for his story. In one scene of Attack on Titan’s first chapter, Eien, Mikasa, and Amin, childhood friends, look up at the Colossus Titan. This bronze statue is Senta to recreate this scene, bringing fiction and reality together as one, and it was placed here thanks to a crowdfunding effort made up of many fans who shared a desire for the children and people of this place to have the courage needed to take on the unknown and overcome hardship. Produced by the Hita Revitalization Council of Attackers With support from the many fans who contributed to the crowdfunding effort” According to Crunchyroll, the wall and statues go along with “an accompanying augmented reality smartphone app.” This app allows you to further immerse yourself by projecting a Titan on the wall of the dam. The linked article to Crunchyroll helped with providing the translated message on the plaque. This wonderful addition to the hometown of Isayama himself further emphasizes just how groundbreaking this series has become. The manga is in its last chapters and according to the author, it is 98 percent finished. More on that here, although, beware of spoilers. And with the manga coming to a close, so will the anime as it approaches its final season; which we wrote about here.
What’s your Reaction?
+1
0
+1
0
+1
0
+1
0
+1
0
+1
0
+1
0
Facebook Twitter Email
👁️ 146