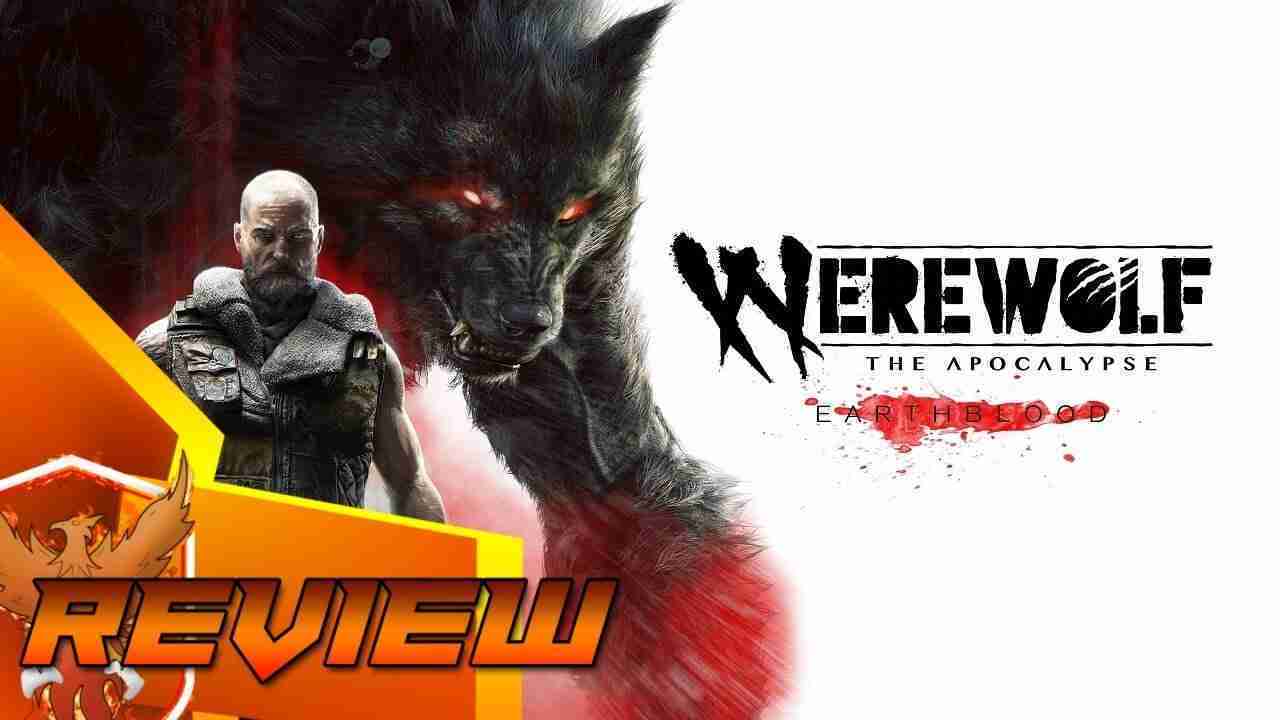 Werewolf: The Apocalypse – Earthblood is an action game developed by Cyanide Studio and published by Nacon. While the title is a mouthful the game is easy to summarize – the game is a throwback to the God of War games and Metal Gear Solid games from the PS2 days. In some ways, it can be a weakness but this game can have a – so bad it’s good air to it. Here is my review of Werewolf: The Apocalypse – Earthblood.

Minor spoilers for the game follow, but everything discussed is part of the prologue. The story has you playing as Cahal – a werewolf who is fighting to protect mother nature. During the game’s prologue he, his wife, and the rest of his wolf pack (the Fianna tribe) are trying to take down the evil Endron corporation. Things don’t go according to plan as his wife meets her untimely demise at the hands of the evil corporations leading him to go on a hulk-like rampage. In his rage, he accidentally killed one of his own tribesmen. This leads him to go on a self-imposed exile from the wolf pack leaving his teenage daughter behind in the care of her uncle/pack leader. Five years go by and Cahal’s quest against the Endron corporation leads him back to his pack.

That’s all the setup that is necessary, the story has you going on quests to infiltrate and sabotage the Endron corporation. During the game, Cahal meets new allies along the way aiding him on his quest to stop Endron and the villainous CEO. The game also features various side quests that can be accepted by various NPCs.

I also want to take the time and say that Cahal both looks and acts like Kratos especially PS2 Kratos, they have so much in common. Both lose a loved one in the prologues of their games, both are rage monsters, and both tend to growl when they reply to someone. Not saying… but just saying.

The story has some problems to it, not so much the plot itself but rather how the story was initially presented. The game has an opening cinematic with gorgeous visuals but the opening narration not only inundates the player with too much information, but also throws jargon words such as the Wyrm, Caern, and Gaia that it’s very hard for players to get their bearings. It could have something to do with the fact that the game is based on a tabletop role-playing game and is part of a larger game franchise. The last thing I’ll say regarding the story is the writing of the dialogue leaves much to be desired.

The game has a pretty nice rock soundtrack, most time the soundtrack can be heard during the game’s loading screen, luckily there aren’t too many. The hard rock motif works for me as the main character looks like he belongs to a biker gang. The game’s sound mix isn’t an issue. If anything, there is one thing I would commend the game on is that the game uses 3D directional audio especially for dialogue. During dialogue scenes with NPCs, the player can use the right stick to adjust the 3rd person camera to their heart’s content and in doing so the audio will change speakers to match (ie if the person talking is positioned to the left then their dialogue will come from the left).

As for the bad, the game’s voice actors are very stale and wooden. There is very little emoting from the voice actors even when the script calls for it. For instance, in the prologue, Cahal’s wife dies right in front of him and the voice actor had given the most unbelievable NO! I have ever heard in my life. Now I am by no means a voice actor but I think I could have mustered something better than what was given. Everyone else is just as stiff but after playing the game for nearly 10 hours I actually got used to the voice acting of everyone. Troy Baker being in every game has gotten me spoiled. But to make an excuse for the game, I will say that Cyanide Studios are a French developer team and there was probably something lost in translation from the writing and direction.

Make no mistake, this game looks like it was made on a budget. The game utilizes the Unreal Engine and it does most of the heavy lifting. The blades of grass, foliage, and particle effects are on point. There are times that this lower-cost game is punching above its weight class. Now I never had any benchmark tools used during the game but just by eyeballing the game, the game looks like it ran at 1080p and 30fps locked. I didn’t notice any stuttering or frame tearing during my time with the game so it was overall a smooth experience.

The game however looks bad with character models, faces, and animations. When characters speak in-engine the NPCs use a lot of stilted/lifeless animations (which conveniently matches the voice acting) and a lot of times I noticed the character’s animations being looped and/or being recycled. It was pretty noticeable and distracting at times, but at least it’s better than Mass Effect: Andromeda. When the game does use full CG cutscenes it feels like a tease for a better bigger budgeted version of the game we didn’t get.

Also, the game has way too many characters clipping between walls and the ground. Even Cahal in his wolf form can phase his head through a cement wall very casually. Nothing game-breaking but more of a visual nuisance that I’ve gotten used to not seeing.

On a final note, I did have one gameplay bug where I beat a boss which was supposed to trigger a CG cutscene but instead the game locked and I was forced to press the button that skipped the cutscene and bring me back to the gameplay. So at least it wasn’t a game crash.

Much like every category in this review so far, this category is also hit and miss. I’m just going to come out and say it but playing as the werewolf was boring. It should be the centerpiece of the game but it is actually the part of the game I sought to avoid. When playing as Cahal, you can change between any of his three forms – the human, the wolf, and the werewolf. Playing as the human and the wolf were the more engaging parts and I kind of wished the developers leaned into that more. Instead, there were scripted moments that force you to play as the werewolf and puzzles that I felt were unfairly designed that could only lead to the werewolf being unleashed and wreaking havoc.

Fighting waves of enemies as the werewolf very satisfying the first one or two times but it quickly becomes old hat really fast. The feel isn’t there and I don’t know how I can explain what to do to improve the experience. It seems like the developers were going for an arcade feel as the werewolf doesn’t feel like he has weight or momentum when he moves and when you attack enemies they get flung around with ragdoll physics.

Playing as the human/wolf forms usually means that Cahal is in stealth mode. There are many locales in this game including a fracking facility, a dam, a prison, and an oil rig to name a few, and Cahal is tasked with infiltrating them all. Now the game doesn’t dissuade you from going in guns blazing (werewolf form) but I found the stealth aspect to be the hook. The stealth aspect of this game reminds me of Metal Gear Solid from the PS1 era with simple patrol AI patterns and visual cones. That scratches the MGS itch for me. When playing the game I was reminded of games like Volume that do similar things. The enemy AI is very basic though. Their eyesight doesn’t see very far. Their patrol routes are simple and most times they just stand in place. I felt very satisfied clearing rooms with stealth takedowns or just by doing one or two stealth takedowns and then proceeding to the next room. The good thing about this situation is the game is constantly auto-saving because the checkpoints are very generous which means that when my cover gets blown I could reload from my last checkpoint and take it from the top. Admittedly, this did drag out my time with the game and there were some rooms I just had to give up on and just werewolf my way through it.

Most of the game features a central hub to operate out of – in this case, it is the wolf pack’s home/camp. There you can find many collectibles/side quests to improve your XP and catch up with your friends.

To shake things up the game also offers Telltale-like dialogue trees that enable you to steer the conversation as you gather info from NPCs. There are times when Cahal can simply talk his way out of situations by lying to NPCs. When I did pull it off I felt very satisfied, like I got one up over someone.

The game also features a skill tree that unlocks moves and abilities that makes the game easier to get through. The game gives plenty of XP during the story but all throughout the game there are plants, statues, and side quests that can net you XP if you keep an eye out for them, most times those things require the player to do a little bit of exploration off the beaten path.

The one good thing I’ll give credit to this game is enemy variety. Throughout the entire game’s run time. The developers kept on adding new enemy types to spice things up. So the statement “the game shows its hand in the first 30 mins” is both accurate and inaccurate at the same time. The same can also be said about the game’s boss fights, there are plenty of them sprinkled in throughout the game.

Werewolf: The Apocalypse – Earthblood is a bit of a mess but there were things I liked about the game even while I was bored playing it. Visually this is the best PS2 game ever. If you told me this was a PS2 game that was remastered, I would be like “Dang! Well done!” Cahal’s devil may care attitude also fits in the PS2 era as well. Unfortunately, this game was made in modern times, and the stiff voice acting, the lifeless faces, the stilted animations are laughable. The Werewolf gameplay is something I tried to avoid so much so that I restarted from my last checkpoint many times.

At $49.99 this game isn’t something I would recommend at that price. Perhaps if it were on sale for $19.99 then I would say it would be worth it. The game’s redeeming qualities come from the challenge I put on myself. I played the game at the normal difficulty and the game was too easy so that extra challenge is what made the game work for me. Because I feel very middle of the road about this game, then this game will get a middle of the road score 5/10.

The game is out right now on PS4/PS5, Xbox One, Xbox Series X/S, and PC and was reviewed on PS4

The review code was provided by the publisher – Nacon – for the purposes of the review.

For more cool games check out our review of Kinetic Edge and Iris.Fall

Angelic A New Take On Turn Based Strategy RPGs