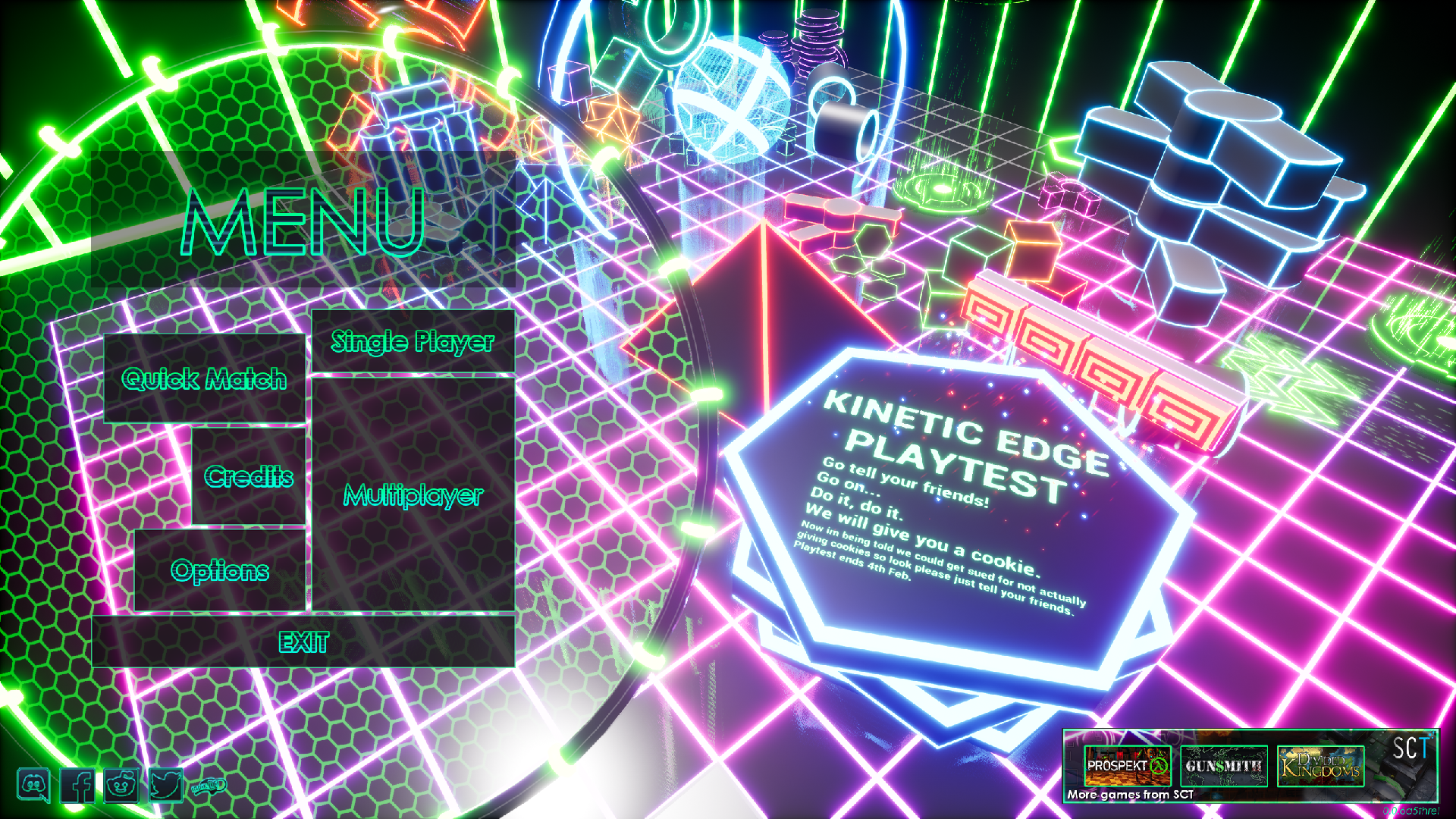 Kinetic Edge is a physics-based platformer/racing game developed and published by SCT that seeks to provide a variety of single player and multiplayer modes. Bright, vibrant visuals and a nice range of challenges spanning the many ways to play certainly make this game enticing. Its plethora of modes, described more in-detail in one of our previous articles, do a good job of varying the entertainment enough to keep the game fun and interesting, but a bit more polish and some added features would really make it shine.

Kinetic Edge definitely brings some intense visuals with it’s bright neon glow, and it thankfully does include an epilepsy/photosensitivity warning. The electric vibes are a pleasing aesthetic in my opinion, but they do seem to be lacking some variety. While the colors themselves have a fairly wide range, there seems to be a complete lack of varying textures. This can make things look a bit monotonous at times, not to mention the intense brightness does begin to wear on the eyes after longer periods of playing. I feel that the game could benefit greatly in this category by varying the brightness levels of some of the features/geometry and splashing in some new textures to help shake things up.

The gameplay of Kinetic Edge really shines best in the variety of ways it lets you play. Making this even more enjoyable, many of the modes can function well in either single player or multiplayer formats. That being said, certain modes do seem to be more enjoyable in one format or the other. Golf, for example, is best played in multiplayer with friends, while a mode like Maze can be a more entertaining single player challenge.

Despite the simplistic controls, Kinetic Edge does offer some rather challenging content. This keeps the game interesting and does offer a nice, rewarding feeling when you are able to complete a new map or set a new personal best time. While I did experience a bit of inconsistency/buggyness in Golf mode with how my ball interacted with certain objects, the rest of my gameplay experience was very smooth and felt good. Both keyboard and mouse, and controller options work with the game well which is also a solid positive.

The primary reason for me that Kinetic Edge does not receive a higher score in this category, is because it lacks a certain feature that I believe is a no-brainer for a game like this; user-created content. Giving players the ability to create their own custom maps, or possibly even game modes, would be a massive boost to the enjoyment and variety in this game. I am not knowledgeable in how difficult it would be to implement, but such an addition could also make SCT’s job easier going forward. Instead of having to design every new map or mode, they could focus on just the assets and let their player base do the rest.

Kinetic Edge‘s audio, although serviceable, is what I would consider its greatest weakness. None of the soundtrack is bad mind you, but it is rather lacking in variety, and each song is rather repetitive. This can detract from the experience during longer sessions especially. The EQ balancing could also benefit from some tweaking as the bass seemed a bit harsh at times, at least to my ear. However, not all is lost here as this game lends itself incredibly well to the option of muting its music and playing your own tunes while you game, unless of course you happen to be streaming.

Hopping in a Discord call with some friends, listening to your favorite music, and booting up one of the multiplayer modes for Kinetic Edge definitely seems like the best way to experience it. Challenging and competing with your friends in intense and stressful Race, Arena, or Survival modes can provide hours of enjoyment. Even the slower-paced Golf mode provides a wonderful way to socially game, possibly making for good stream content as well. The potential for fun and laughs definitely sticks out as the games strongest asset, which is why I decided to give it its highest score in this category.

When the neon dust settles, Kinetic Edge presents itself as an interesting and engaging game that goes best with friends, but provides a good single player experience as well. Shining brightest in its gameplay and multiplayer aspects, it seems to have even greater potential that could be unlocked by addressing its weaknesses and adding in the ability for users to create new content. Considering the experience, the potential, and the price I would recommend picking up Kinetic Edge as a good game night option for you and your friends. It is scheduled to be available for purchase on 2/5/21 via Steam on PC.

Disclosure: The publisher provided the author with a code for the game for the purpose of this review. The information contained within this review is accurate as of the published date.

Hellbound Out Now On Steam!!