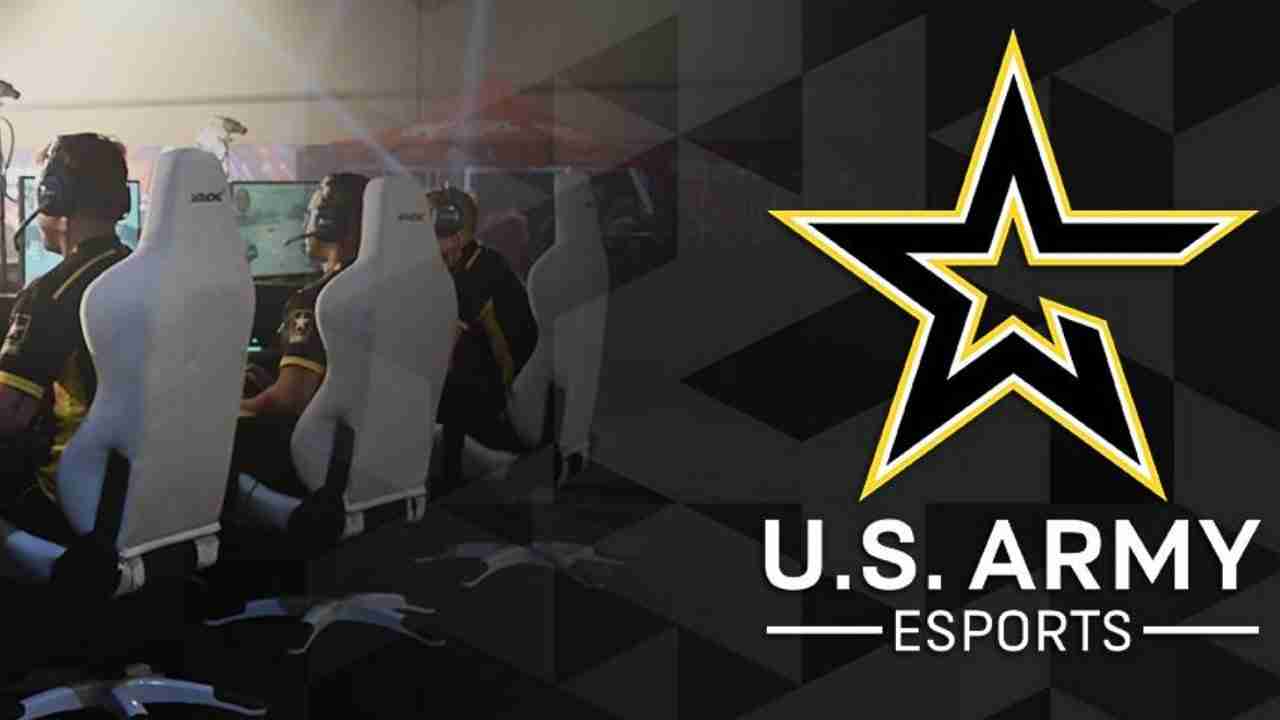 The US Army’s esports team has “paused” video game streaming on Twitch following the controversy over its recruitment practices and policies.  For the uninitiated, the US Army has an esports team.  It was created in November 2018 just before it was announced by the Associated Press that in 2018 the Army missed its recruiting goals.  So what is the Army to do? Well, you go where the demographic you are looking for is at.  Twitch said that they have 28 million unique users per month and 80% of them were teen males, which is the prime recruiting age. Now it has come under scrutiny due to questionable giveaways and potential unconstitutional bans and is now getting unwanted attention from lawmakers.

Per the US Army’s official website the esports team is serving as a marketing and engagement brigade similar to that of the Golden Knights and the Army Marksmanship Unit and not a recruitment tool.  This is done to “help us connect to young people and show them a side of soldiers they may not expect. This initiative will help make our soldiers more visible and relatable to today’s youth.”  Man, just putting that quote out there makes me want to say “OK boomer” Like c’mon?! This screams “Hello fellow youth”

All that notwithstanding let’s get into the heart of the matter.  This all started on June 30th when the US Army Esports Twitter account got into a cringe-y conversation with the Discord Twitter account.

Following this, people realized that the US Army has an esports team and on July 1st (the next day), people decided to make it their goal to get banned from the US Army Esports Discord server by posting a link to a Wikipedia article listing out US war crimes.  Then on July 8th esports consultant Rod Breslau (@Slasher) posted to Twitter a video of activist and political consultant Jordan Uhl getting banned from the US Army’s Twitch chat by asking “What’s your favorite war crime?” followed by the link to the Wikipedia article.

just having a good time with the US Army esports twitch stream @JordanUhl pic.twitter.com/qnjyxg1KP0

So this made the chat blow up and many users began asking about US war crimes and getting banned themselves. However, it didn’t stop there Jordan Uhl did the same thing on the US Navy’s Twitch channel and he got banned there too.  Alongside all of this, Uhl reported that the links to the giveaway on their Twitch channel for an Xbox Elite Series 2 controller (retails for $180) was just actually a link to a recruitment form with no mention of a giveaway.  This prompted Twitch to step in and make the Army remove the link to their “giveaway.”  A Twitch spokesperson said in a statement.

“Per our Terms of Service, promotions on Twitch must comply with all applicable laws.  This promotion did not comply with our Terms, and we have required them to remove it.”

However, the US Army has denied the claim and stated that they have given away 10 controllers as well as setups and chairs over the last year but a spokesperson for the Army did say that they are “exploring options to customize its giveaway pages to provide more external clarity.”

Following all of this, lawyers at the Knight 1st Amendment Institute at Colombia University representing Jordan Uhl said that banning him and others was unconstitutional and a violation of free speech.

“The Army and Navy esports teams’ banning of users based on their speech about war crimes in unconstitutional.  When the government intentionally opens a space to the public at large for expressive activity, it has created a “public forum” under the First Amendment, and it cannot constituitionally bar speakers from that forum based on viewpoint. These principles apply  with full force in the digital sphere, including on social media platforms, as courts have emphasized in recent cases” – Katie Fallow Knights First Amendment Institute

Following that, a US Army spokesperson gave a statement to theScore esports that read:

“The esports team member did not ban the users because of viewpoints, they banned them for behavior intended to harass, degrade and intimidate, which violates the Twitch community guidelines.  Since the team started on Twitch, they have had specific chats rules on the page that clearly states harassing behavior will not be tolerated.  With respect to banning users, the U.S. Army eSports Team’s social media pages were being spammed with ‘what’s your favorite war crime’ memes and questions.  The eSports Team blocked the term ‘war crimes’ in its Twitch channel after discovering the trend was meant to troll and harass the team. Twitch members used creative spelling to continue related posts. Following the guidelines and policies set by Twitch, the U.S. Army eSports Team banned users from its account due to concern over posted content and website links that were considered harassing and degrading in nature.”

Of course, the lawyers at the Knight First Amendment Institute were ready to respond with a counter-argument.

“Mr. Uhl’s speech did not constitute harassment under the terms of service, which define harassment to mean ‘any content or activity that attempts to intimidate, degrade, abuse, or creats a hostile environment for others.’  Mr. Uhl’s message drew attention to prior U.S. military actions in the context of the Army’s and Navy’s use of Twitch as a recruiting tool.  His messages were quintessential political speech, which lie at the the core of the First Amendment.” – Katie Fallow Knight First Amendment Institute.

So this looked bad for the US Army which is why they took a break.

“The esports team is reviewing ways to customize its giveaway submission forms and provide more clarity for each of its giveaways.  The team has paused streaming to review internal policies and procedures, as well as all platform-specific policies, to ensure guidelines for participating in the the space are clear before streaming resumes.” -U.S. Army spokesperson.

As if things weren’t bad enough already, to add to this garbage truck on fire, Alexandria Ocasio-Cortez AKA AOC (D-NY) got herself involved in the issue by filing an amendment to a house appropriation bill.  This bill would prevent the military from using the funds in the bill to “maintain a presence on Twitch.com or any video game, e-sports, or live-streaming platform.” (Side note someone needs to tell AOC that the domain is Twitch.tv, not Twitch.com)

“It’s incredibly irresponsible for the Army and the Navy to be recruiting impressionable young people and children via live streaming platforms,” Ocasio-Cortez told Motherboard. “War is not a game, and the Marine Corps’ decision not to engage in this recruiting tool should be a clear signal to the other branches of the military to cease this practice entirely.”

It’s unclear, though, if the amendment will survive the process of approval for the bill, which will have to pass through both the House and the Senate before it can become law.

So this pretty much sums up the story so far, so if you are only here for the story then you can stop reading here because from here on out, I am going to give my editorial and give my thoughts and opinions on the matter.  This is my 2nd article in a row where I cover controversy and on the first go-around, I didn’t give my opinion or a strong stance on the matter because I didn’t have time to formulate my thoughts and the subject matter hit too close to home for me. However, here this matter seems a little bit more clear and obvious to me.

I think that attempts to recruit or “market” the US armed forces via Twitch are shady as hell and downright uncomfortable.  The people on the esports teams or on camera are not officially positioned as recruiters but act as such and from all my research in writing this article, I found evidence that they are in fact given a crash course in Army enlistment programs to answer questions from people interested in enlisting.  The official website for the esports team says that they are not recruiters yet the website its hosted on recruiting.army.mil so there is some dissonance for you.

Furthermore, there is a big difference between playing Call of Duty and actually answering the Call of Duty.  The skills are not comparable, the headspace is not the same, and one is less morally dubious than the other (you know the one where someone doesn’t actually get shot). People under the age of 18 are impressionable and courting them through gameplay streams seems predatory and having an esports team can give off the wrong idea of what the lifestyle is like being in the military.  But the reach goes further beyond this, the armed forces have partnerships with Twitch, ESL, and eSports teams such as Cloud 9 and Evil Geniuses.  In addition, the US Army has sponsored segments for videos on the biggest video game website IGN.

So what does this all mean? Well, I have come to the conclusion that the Army and Navy and other armed forces that do eSports are going out of their way to be seen positively by the public, and watching them game is supposed to make them relatable which, to spell it out for you, it’s being used as a propaganda tool and that makes my stomach churn.  If you think that my statement about propaganda is an exaggeration, well I just said earlier in the article that they banned people for asking about US war crimes.

Gas Station Simulator. The Steam Hit Is Coming To Console

Interview With kaboose From Envy VALORANT