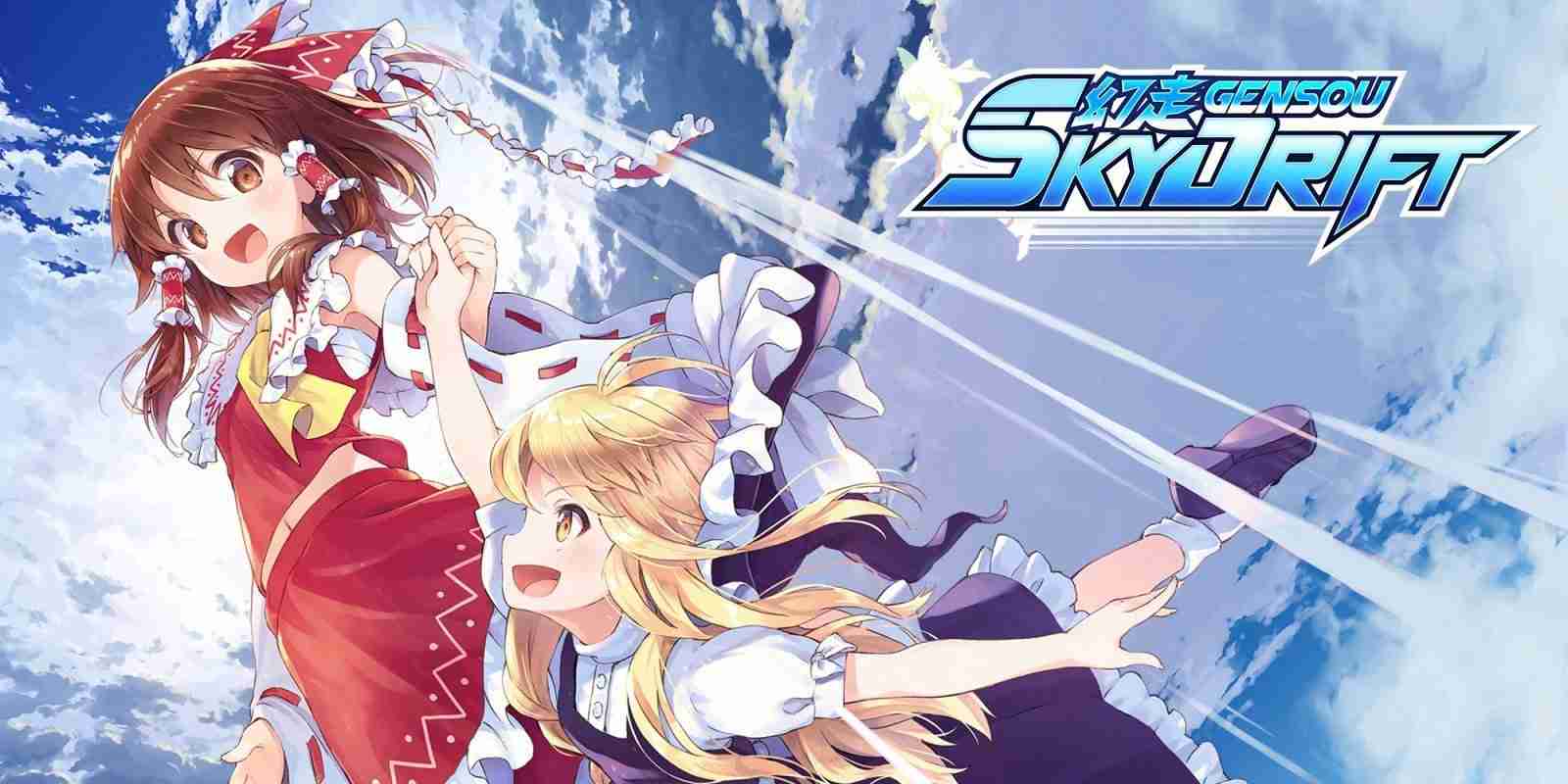 Gensou Skydrift was originally released way back in 2019 on Steam and Switch. However, it’s now speeding its way to PS4 and PS5 at least at the time of writing this. I played on the original PS4.

Gensou Skydrift is an arcade racer based on the long-running Touhou project. Which is a bullet hell-type game dating back to early 1997. Additionally, characters have also been involved in other forms of media from comics, other games, art, memes, and more adult content. I know some may be pulled in by the Mario Kart developer created buzzline used. However, do not be mistaken this is nowhere near a Mario Kart quality game.

What Does Gensou Skydrift Offer?

There are 16 courses in Skydrift all set in the Touhou universe. As you get ready to race you get to choose your 2 girls to race with. One rides on top of the other like a little surfboard with the ability to swap between them at any time. Each girl has a different set of powers, abilities, and other racing stats. Spells range from interference, acceleration, and defense, or last words. Gensou Skydrift was published by  Phoenixx Inc who has published games like Touhou Luna Nights, Seven: Enhanced Edition, and a few other anime-type games. This game was also developed by ilucalab who seem to be deep into anime-type games.

I don’t know who this game is for. Fans of Touhou project? Maybe, but not likely as bullet hell is vastly different than arcade racers. People, who love arcade racers? This fills that definition in the barest sense. I know this is a harsh statement, for those who love this game really love it but most other people won’t. If you’re looking for an arcade racer there are others you can spend tons of time on.

There is a campaign mode, versus mode which is where the online play is found. Additionally, there is a free run mode which is time trials and a gallery. I have to take a guess at the story as I have no previous experience with Touhou project games or media and the store description is just as bare. “Reimu Hakurei and her friend Marisa Kirisame spot someone running off on a racetrack and they have to catch them to regain power.” The game really throws you in and expects you to know who everyone is. At that point, I have to question why have a story. Why not do a campaign mode like Dirt or Wreckfest or just have a Mario Kart tournament style mode.

So What is This Game?

This is an easy achievement/ trophy game or at least it feels that way. While some of the courses are pretty cool like the airship that loops outside the clunky sluggish controls take away from that hard design work. You have 2 main buttons go and brake which serves more as a handbrake. There is no way you can make most turns without that handbrake especially some winding indoor areas with lots of turns. If you crash into walls there’s no reverse, just a slow bounce off the wall that will eventually point you in the right direction. If you fall off a track after you clip through whatever the understructure may be the screen fades to black to put you on the track again.

Skydrift lacks precise and tight controls. You know the very things important to a racer. The spells which are your red shell, green shell stand-ins are randomized. You drive through the spell/ speed boost rings and when you build up enough in the meter you can send a spell out. But with the AI almost designed so you win no matter what most times you won’t need to use them.

The graphics make this look like a mobile port. There’s something about the chunky 3D textures and models that make this look like a phone game. They have had since 2019 to fix all the outstanding issues so I refuse to give it a pass. The character artwork is not cleanly cut out. You can still see the white halo that’s sometimes left around photoshop images that are not cleaned up after removing a background. For $30 at least here in Canada I expect better especially when games like Hades, Stardew Valley, and Art of Rally are around the same price or cheaper.

AI That Wants You to Win

Your fellow magical girl racer AI seems like it was designed for you to win no matter how bad you do at least in the campaign. Seriously, I crashed into every wall I could, didn’t use any spells, tried to avoid the speed/ spell boosts and still came in first. If you keep an eye on the map you can see the other racers rubberbanding around. Not Cyberpunk 2077 levels of rubber banding but pretty dang close.

I hoped at least that the soundtrack would make up for the lacking controls and AI. A good soundtrack can cover up a lot but it’s a generic high-energy soundtrack. You know the ones I’m talking about. It sounds like it was picked out of a music pack the devs bought and they said oh good enough. Additionally, the music will cut out randomly which isn’t a problem as I turned it off after a while. There’s no voice acting either so there’s not much to miss out on audio-wise anyway.

I honestly don’t know what to think of this game. It’s an arcade racing game sure but it lacks basic features and mechanics. Gensou Skydrift came out in 2019 and is now coming to PS4 and PS5 for almost $30. A lot of these issues should and could have been worked out for a console release which is why I’m scoring this so low. They had time to polish it but didn’t. They just re-uploaded what was on PC and Switch for the same price. I can in no way recommend this at full price, half price, or at all. If you really want to play, wait for a sale. There are plenty of other Touhou games and plenty of other arcade racers from both indie and AAA studios to sink time into.