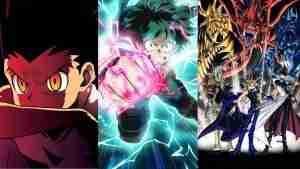 Many fans of anime are well acquainted with your shounen staple anime. For some, this was their starting point. You’ll see a plucky go-getter, determined to be the best in their craft, set forth in their world to overcome challenges to reach their end goal. Often their end goals are defined by a big baddie, who, when introduced, has a sizable gulf in power to the protagonist. In order to level-up at some point in their journey, some protagonists come across the infamous tournament arc in the story. While some fans dread these arcs, I must admit they are some of my favorite content in anime. Before you roll your eyes, at least hear me out on why I get giddy every time an anime shows off a tournament. I love the journeys of the characters encountered in anime. How they grow, the relationships developed, and the ways they obtain strength to achieve their goals. Growth is the point of tournament arcs; they are about the journey, not the winner. One of my favorite examples of this is the Hunter Exam arc of Hunter X Hunter (2011). While an exam by name, this is a tournament through and through, with the end goal of our intro protagonist, Gon Freecss, earning his hunter license. However, this whole arc is masterfully done, introducing the viewer into the world of Hunter X Hunter. We learn what motivates Gon and his friends, Kurapika, Leorio, and Killua (best boy). We get glimpses of characters who will return later on in the series, so the viewer can gauge the growth of secondary characters over time. Most importantly, we see the growth and skill development in our protagonists under specific conditions.  When Gon and friends need to fight their way down Trick Tower during the third stage of the exam, we see them butt heads and tackle issues in their own way. Some fail in challenges while others succeed, but by learning about each other’s strengths and personalities in tandem with the audience, they are ultimately able to clear stage three and go to stage four. Stories like these allow the audience to take the journey with the protagonists, knowing Gon and friends will win in the end. It’s about how Gon wins, rather than if he wins. The “how” is magnified through the limits put in place during tournament encounters.  Tournament arcs have boundaries set–either by villains or mystical forces–which force the character to think about how they might get out of a series of scenarios with minimal damage. I think of Yugi’s battle with Arkana (Pandora in the Japanese adaptation) during the Battle City tournament in Yu-Gi-Oh. Under the employ of villain Marek Ishtar, Arkana duels Yugi on a buzzsaw-rigged battlefield. The lower their life points got, the closer the saws came until one of them would meet their end, while the winner would get the key to unlock their shackles and a locator card. This battle illustrates the yin and yang relationship between Yami Yugi and Yugi-Boy, as well as how Yugi needs to learn the balance between these two sides to come out of this battle whole. Regular Yugi isn’t strong enough to win on his own yet but has the ability to sympathize with his opponents, as they are also being used as pawns in Marek’s game. Yami Yugi has the strength to win, but that strength comes at the cost of almost letting Arkana die from the buzzsaws. By managing both sides, Yugi has the tools to win, and manages to let Arkana escape with his life. He played within the rules of the duel and still managed to survive with minimal damage–minimal because Arkana loses his sanity, but that isn’t on Yugi. These limits push characters to boost specific traits which will ultimately benefit them as they journey toward their overarching series goals outside of the tournament. Lastly, I know one of the general sticking points of tournament arcs for people is the predictability. I’m happy to report that in the new age of anime, that is changing as well. We don’t always know who the winner in tournaments will be because the formula is slowly being rewritten in exchange for other rewards for the protagonist. Izuku Midoriya of My Hero Academia fame can attest to this fact. Spoiler alert, during the School Festival Tournament Arc, our hero does not make it past the quarter-finals. Disappointing, I know. As mentioned before, in other tournament arcs it’s a given that the hero will win, it’s just how they win. But in this case, the win wasn’t important for Midoriya’s development. The loss teaches us a lot more than we realize. From Midoriya’s drive to help a classmate in need despite the possible consequence of losing and solidifying his growing understanding for a hero’s resolve, to providing the audience with a good place to note his growth up until that point, the loss is a curveball within the tournament arc structure. A healthy curveball that should be replicated to convert more believers to this excellent arc structure.  My hope is many tournament arc naysayers will at least see these arcs through a new lens. When paced well, these arcs can provide a ton of value for the main character and supporting cast. And let’s be honest, the fights are pretty dope as well (here’s looking at you, Yu Yu Hakusho). If you’re still struggling with tournament arcs just remember these two things: first, it’s about the journey, and second, you can always watch something else. I’ll be here with my popcorn waiting for the next tournament. Do you like tournament arcs? Just want someone to chat about anime with? Reach out to me on twitter @DarkTagger.
What’s your Reaction?
+1
0
+1
0
+1
0
+1
0
+1
0
+1
0
+1
0
Facebook Twitter Email
👁️ 169