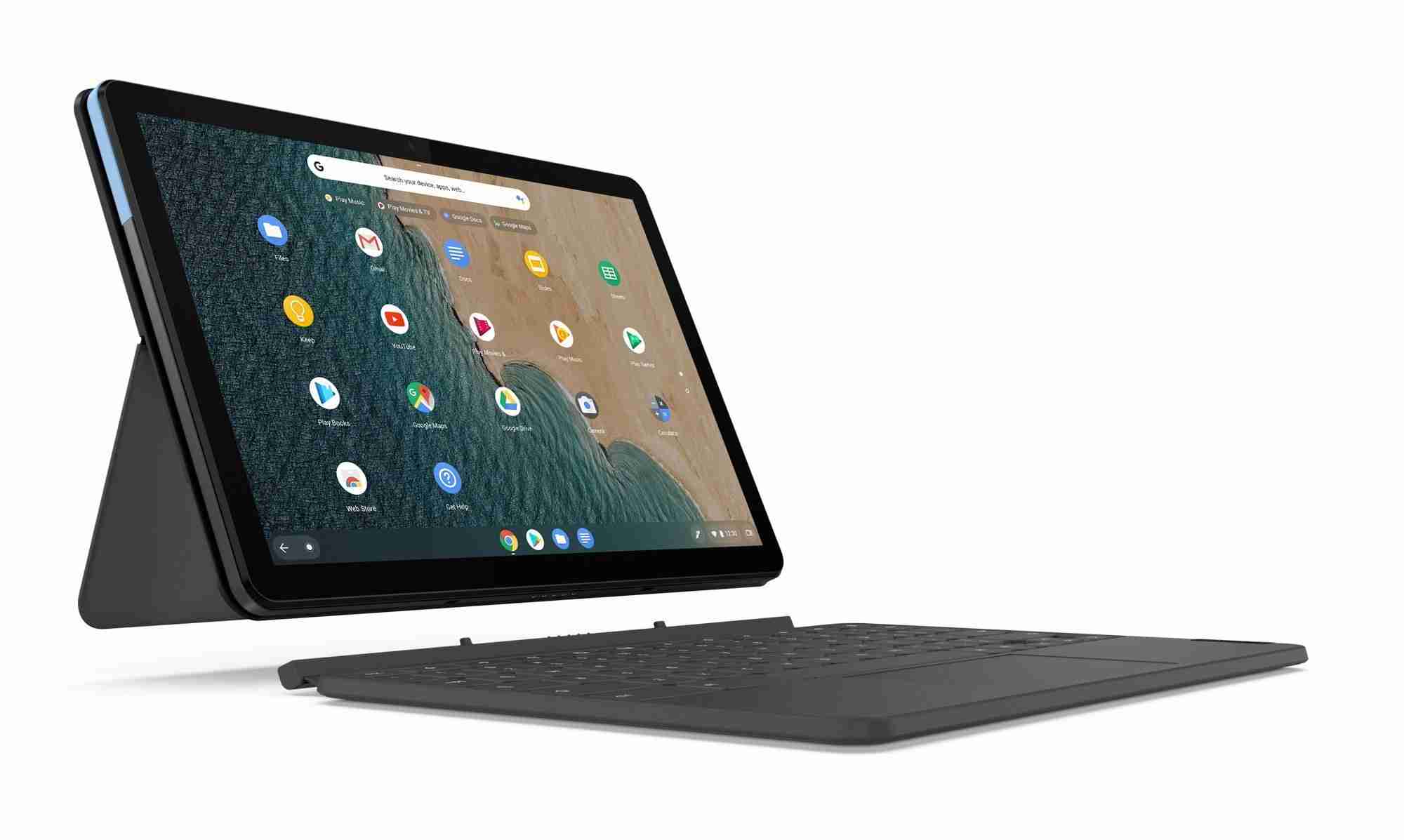 Sometimes, you come across a deal in the tech world that seems too good to be true. Such is the case with the Lenovo IdeaPad Duet. A sleek, svelte 2-in-1 Chromebook, the Duet gives you pretty much everything you need in the box to have a functional tablet-laptop hybrid device for just $300. It truly is an insane deal…almost too good to be true. And I’m happy to say that, in several ways, this mini computer/tablet thing is very, very good. I used the Duet as my primary computing device for four days, and I came away mostly impressed.

Price: The reviewer purchased this device with his own funds for $299.99 plus tax at Best Buy.

The Duet has an unexpectedly premium design for such an affordable package. The tablet is made of mostly aluminum, and it has a stylish two-tone iron gray and ice blue motif. Without the included accessories, the tablet weighs about one pound – roughly the same as an equivalent 10.2-inch iPad. There is a single USB-C port on the bottom right of the tablet in landscape mode. This allows for charging, as well as connecting to an external display and accessories. Surprisingly, this tablet does not contain a headphone jack (oh, how I wish this unfortunate trend would end). Mercifully, Lenovo included a USB-to-3.5mm adapter in the package.

The tablet’s IPS display is crisp and colorful, with good viewing angles and a 16:10 aspect ratio that makes working with productivity apps a bit easier. It has fairly large bezels around the display, but what you’re getting here for $300 is very good. I don’t think many people will have any complaints about the display, especially at this price. With a 1900 X 1200 resolution and roughly 223 ppi, the screen is about as sharp as an iPad display. It loses a very small amount of brightness and contrast in off axis viewing, but this is a non-issue. The screen also has about 400 nits of brightness. Overall this is a very bright, sharp, usable display, especially at this price point. As an aside, I do have a single dead pixel near the bottom of my display, but it isn’t really noticeable unless you go looking for it.

The tablet has an 8 MP rear camera and a 2 MP front camera. They are very much so tablet cameras. They’re fine for video conferencing and document scanning (which is the main point of cameras in this type of application), but not much else.

With a humble 2.0 Ghz Mediatek “Octa-core” processor and 4 GB RAM, the Duet is far from a beast. Apple’s 10.2-inch iPad, even with its old A10 chip dating back to the iPhone 7, would embarrass this thing on paper. However, keep in mind that Chrome OS is a very simple, lightweight OS that is designed to run well on modestly-specced machines. What’s here is usable for a solid portion of my day-to-day tasks. I was able to browse in Chrome, chat on Discord, make edits in Google Photos, use Gmail, check social media, and create documents in Microsoft Office without much in the way of hitches or lag.

Of course, performance isn’t perfect, and I did run into moments where the Duet stuttered on some websites. The scrolling experience can also occasionally be choppy, and the device can’t handle too many apps being open at the same time. Google Photos also froze up on me a couple of times, forcing me to restart the app. Overall though, the Duet punches above its weight, and I think the majority of people picking this thing up for basic tasks will be suited just fine by the level of performance on tap here.

Chrome OS is able to run Android apps, and in this case apps like Twitter, YouTube, One Note, and Microsoft Office worked very well. Of course, I also fired up some games to see how they would run on the tablet as well. The games I tested for this review were Asphalt 9 and Call of Duty Mobile. While these games don’t run as well here as they do on higher-end tablets and smartphones with more powerful SoCs, they are definitely playable. The light weight of the tablet and quality screen made for an overall enjoyable experience.

Speaking of gaming, I did try out the Xbox Game Streaming beta on this device. Setup was quite easy. All you need to do is download the app from the Google Play store, sign into your Microsoft account, link your Xbox, and you’re good to go. Pairing my Xbox controller via Bluetooth was also a painless endeavor. The playing experience, however, left a lot to be desired. My games of NHL 20 and Call of Duty Modern Warfare were plagued by lag and very poor streaming quality. I have a beefy Fios Quantum gigabit connection, so I have to believe that the hardware in this product is ill-suited for the rigors of game streaming. If xCloud/local game streaming is something you’re interested in, look for an Android tablet, Chromebook, or phone with better specs.

This is my first Chrome OS experience, and I’m impressed by how usable the operating system is in both tablet and laptop configurations. Tablet mode, in particular, works very well with intuitive iPad-like gesture controls for multitasking. You can accomplish more real-world work than you think with Chrome OS. I did have issues adding my HP wireless printer, however. Oddly enough, I had to add this printer to Google Cloud Print via Google Chrome on my MacBook to get it to show up on the Duet. I wasn’t able to do this natively with the device itself. Other than that, using Chrome OS on the Duet proved to be a mostly snappy, pleasurable experience.

The included keyboard included in the box is mostly good as well. The keys have a surprising amount of travel and tactility (although Lenovo’s keyboards are usually excellent, so this should come as no surprise). It works just fine on a desk or table. In fact, I was able to pound out the entirety of this review using the Microsoft Word app and the included keyboard on the Duet.

There are a few issues with the keyboard, however. One has to do with the punctuation and number keys. In particular, the period, comma, apostrophe, and plus/equals keys are frustrating to hit with any kind of consistency. This is a small keyboard on a small device, so the aforementioned keys are all half-sized for space reasons. Additionally, the piece in between the display and the actual keyboard is very flimsy. This makes the device nearly impossible to use on your lap in a laptop configuration.

It’s worth noting that the Duet supports USI active styluses. However, Lenovo doesn’t have their own stylus on the market at the time of this review, and as a result I wasn’t able to test this feature.

The killer feature of the Duet is its battery life. With moderate use, this thin, lightweight tablet can easily last two days on a charge. Most tech outlets are reporting between 10-13 hours of battery life, and based on my time with the device this seems to be accurate. This is truly a tablet that can go the distance.

Overall, the Lenovo IdeaPad Chromebook Duet is one of the best values in the tech industry right now. If you’re in the market for a secondary consumption device that can also do some light productivity work from time to time, it’s hard to find any fault here. The fact that Google has promised to ensure the device gets software updates for eight years (!) is promising. And, unlike the competing iPad and Surface Go, Lenovo includes all of the accessories you need to unlock the full experience right in the box. It’s a high-quality, well made product. Chrome OS is also surprisingly robust in its current state, and its ability to run Android apps enhances its functionality. The tablet also has just enough power to suit most consumers’ needs just fine. As long as you’re not picking this up to use as an xCloud tablet, you should have a great experience.