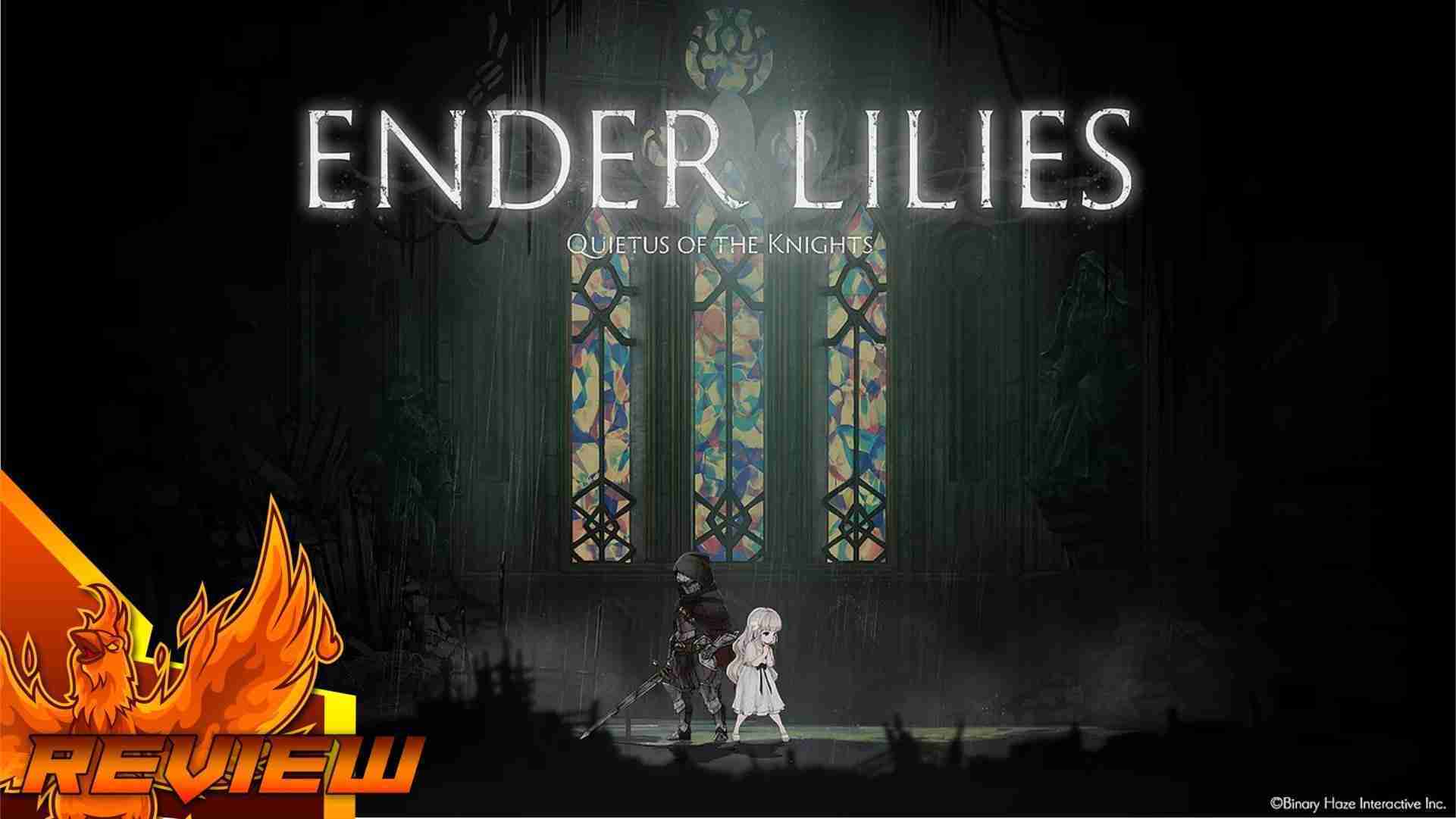 It’s no secret that Metroidvania-style games have been very popular. With many of those games being indie titles that have been massive hits. So it’s always a treat when a new one comes out. And man does Ender Lilies come out at the perfect time. Filling in for that summertime gap coming shortly after the post E3 hype, it was a stunning piece. Aesthetically pleasing, in a genre that’s only gotten popular, is it a beautiful nightmare or another hollow attempt? Read down below for my Ender Lilies review.

Warning: there will be Slight spoilers ahead, so do read at your own risk.

The Story for Ender Lilies starts shrouded in mystery. The main character known as Lily awakens from her slumber by the spirit of an Umbral Knight. Unaware of why she was there, the Umbral knight reveals she is a descendant of the white priestess. Having lost her memories during her slumber, she discovers that the world has been cursed with a blight.

The blight rots its victims driving them to be undying, as their mind no longer controls their body. However, the young white priestess meets a blighted spirit much stronger than others. The guardian Siegrid attacks, but is bested by the priestess and knight. After which, the priestess is able to cure the spirit of the blight, setting her free. There it is revealed that Lily was angry that she could do nothing for the Priestess, but took solace in caring for and protecting Lily, who resembled the priestess greatly.

Having understood only the white priestesses were able to truly cure the blight the knight swears to help her. Along with Siegrid who, now cured, wishes to aid Lily and offers her power. From here much of the world’s story is revealed through notes scattered across the map.

With some being inaccessible till the player has the correct traversal methods. Like many Metroidvania emphasizing backtracking and exploration, the game does a fair job of giving many big key story points through the main areas. While at the same time, building the world’s lore through notes left by previous denizens. I love the world-building elements of exploring to find notes that reveal much of the history.

The story, while not necessarily original, is wonderfully written. It builds the world into a beautiful dying landscape. And with a mystery of why the priestess was in a slumber; as well as her abilities to cure the blight are one of the biggest mysteries at the center of the game. While there is much to discover, there is so much presented upfront that it is easy to follow and it’s for that I give it a solid 8.5.

The visuals of the game are absolutely stunning and beyond breathtaking. Being classified as a dark fantasy, the monochromatic feel does not take away from its sheer beauty. The way the Grey and Black mix create a drab, yet vibrant world stands out.

Mixed in with the red accents from the spirits that are collected by the player. And as the player explores more areas, from flooded ruins to dilapidated villages. Even a toxic forest overrun with magic mushroom mages. Slowly color is added in while being washed out in a dull hue. Everything about the environment stands out.

Even Lily and her 2.5D sprite being almost pure white contrasts to the background. The Designs of the fellow spirits are unique and beautiful too. From Umbral Knights’ armor to Sigrids’ fallen angel nun ensemble. Hell even her monstrous skeletal form shows true inspiration while being grotesque. Even the large stature of Gerrod, the Elder warrior protecting the Priestess, every design is simply awe-inspiring.

Very few games can use a mute and limited color palette to the level that Elder Lilies does. With its sheer level of detail and beauty, I give Ender Lilies a solid 9.5.

If there is one thing that can break immersion, it is the sound design. But this is one area, that is definitely an absolute home run. Honestly, the sheer ambiance that went into the game is absolutely astonishing. From the sounds of Lilys’ feet tapping across the stone to the sound of rain coming through the ceiling. The splash from landing in water to every single sword swing.

Each sound has an impact and is absolutely perfect. But that all pales in comparison to the OST. The background music that plays is simply divine. Truly it has a wonderous orchestral feel to it. Just how a symphony can create an atmosphere and it creates an image in one’s head; The music choice truly brings to life the world around it. Each rising note played both by pianos and several instruments creates a serene beauty.

And with each environment getting its own music, each area feels unique and different thanks to the varying styles that accompany it. It is hard to find even a single fault within the audio. Even going so far as to push for a muffled sound effect when Lily is underwater. The team truly did absolutely fantastic with the audio that it is simply perfect.

These artifacts can add boosts to health or more charges for use of the spirits. Now speaking of the spirits that’s actually where the uniqueness of the combat comes into play. Lily herself cannot fight on her own, instead, she relies upon the power of the spirits she possesses. In turn, this creates a very unique style of combat as she can only hold three at a time. However, the player does have two bars to be able to switch quickly on the fly.

Another aspect is that enemies have a stagger bar that when broken will knock them off balance. Allowing the player to unleash punishing combos and damage before they recover. With each spirit doing different levels of damage and stagger damage, mixing up combos play a key in combat.

The respite points, represented by benches, are also a key part of the game. from allowing the player to change artifacts they currently have equipped to upgrading their spirits levels; this is where the player will do a majority of their work. These also act as save points allowing the player to save their progress. But they also are necessary for another aspect.

When the player rests at a respite they heal and replenish their prayers, which act as a healing item, but it also resets the enemies. In games like Hollow Knight and Dark Souls where enemies are reset when the player rests. Thus allowing the player to farm them for experience and items. And when the player dies they lose all gained experience or currency. However, Ender Lilies does not punish you like this. While you will return to your last respite point you will not lose anything. As there are levels and experience you do not lose progress upon death.

The levels in-game are more towards increasing your health points slowly over time to allow the player to explore more. This doesn’t mean that the game isn’t challenging still, it does present quite the challenge. From the need to switch attack bars on the fly, utilizing the dodge to go through enemies, and enemies still hitting hard. The game presents a fair level of difficulty, without being punishing to players who are not used to those styles of games.

With a fair level of complexity but with ease of access, Ender Lilies strikes the perfect balance of difficulty and accessibility. The combat is fluid and requires a lot of strategies, while also being quick and adaptable. As well as it always being handy to fast travel, thanks to the in-game horse that Lily meets, exploration is a blast in this world. It is with this I give it a well-deserved 9.

Ender Lilies is truly a beautiful game that stands out. With its robust combat and light RPG elements, to its sheer beauty through its art. The game stands out in a rather growing genre, without a lot of stress or punishment for non-veterans.

But that doesn’t mean it is a game to be taken likely. But for fans of dark fantasy games and especially Metroidvania’s this game is an absolute must-play. And I highly recommend it. The story alone and character designs are enough to draw me in hopefully, it does for you as well.

You can find out more about the game on their official site and learn more about the game and some of the characters. Ender Lilies is available on Nintendo Switch, Steam (PC), PS4, Xbox One, and Xbox Series X/S consoles. It is on sale for $24.99 USD.

Make sure to check out our other reviews by the team if you haven’t already.

Ender Lilies: Quietus of the Knights