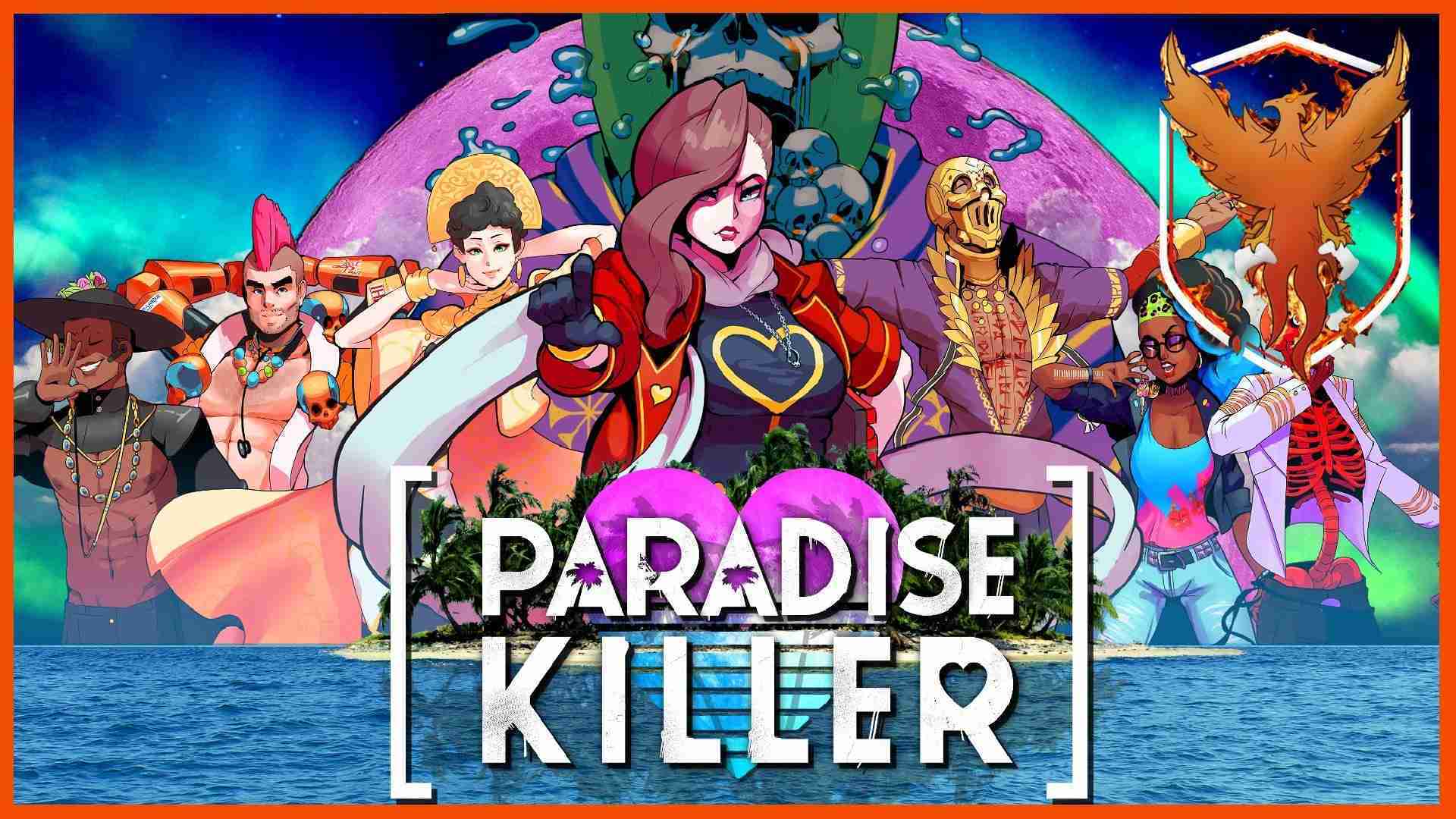 What in the Vaporwave fever dream is Paradise Killer? It’s a stylish murder mystery with a dash of weird, mixed with solid writing and a music lover’s dream soundtrack.

The world is about to end but as it does the council the leaders of the syndicate and wakers of gods are brutally murdered behind holy seals only they can open. The exiled Investigator Lady Love Dies must come down to the island. Figure out what the heck happened and serve justice to move onto the next sequence perfect 25.

This is a stylish 3D first-person graphic novel styled game with an open world to explore and get lost in. Think of the Persona series game but with a sun-soaked almost vice city like fever dream paint job. Even that isn’t a fair comparison of this game. Although the 3D art and environments can be strange and almost basic looking and it gives me vaporwave vibes it’s beautiful and all works together to make Paradise Killer the unique game it is.

Sequence 24 is a weird beautiful land dotted with mammoth buildings reaching towards the heaven and underground hellscapes that you will have to search high and low in. Although you may spend a small time with the world it will leave a mark on you. The 2D character art is out of this world detailed and stylized. Each character has a feel and story to them just by looking at them. Like Sam, a skeleton who lost his skin and bones turned blood red to say with his love or Crismon Acid, a former soldier blessed by the gods appointed as an Idol that now has a goat’s head. No main characters look alike and all it’s hard not to fall in love with the care they are crafted with.

Breath Life Back Into Paradise

You play as Lady Love Dies an exiled investigator who is called down by the manifestation of Justice and has to come back at the end of sequence 24 to figure out what happened to the council and who is truly guilty and who is just a pawn in an evil and dark game. Along with Starlight, your trusty computer you need to collect evidence, talk to everyone and scour the island to figure out who to deliver justice to and who may be spared in a trial to end all trials.

The story is deep and well written just like the characters. I will say it is kind of straight forward story-wise but you can choose who gets the blame based on your evidence. Meaning you can sentence someone who only had a minor role to death just for the small role they play in the grand conspiracy. In contrast, you can spare them by shifting more blame onto the truly guilty people. Every single character is varied and different with no 2 stories being the same. All having made it onto the syndicate at various times and for different reasons that you get to learn as you hang out and talk to them.

Hanging out increases your relationship and gives you a relic and more information vital to the story when you max it out. All the characters are intimately familiar. With some having known each other for a millennia or more which made some of the trial choices harder than the others. You can even romance some characters. Not Mass effect style but the option is there.

There are various side missions you can do for ghosts around the island that will either give you upgrades of Starlight or key story items in exchange for solving their story and letting them move to the afterlife. Footbaths on the island serve as Lady Love, Dies upgrades and the best one is the mystery finder. It lets you can find all the collectables on the island like the scattered music, bloodstones to buy drinks from vending machines. Also relics of the past islands. You also collect Whisky brewed from other sequences and skins for Starlight some of which can also be bought from Crimson Acid. 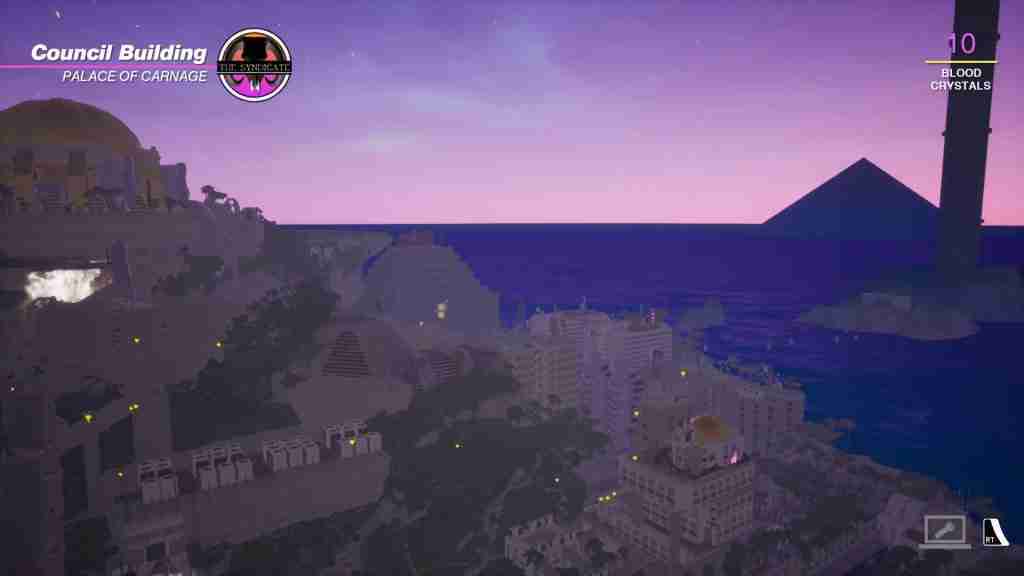 Who Runs The Show?

Paradise Killer was developed by Kaizen Game Works founded in 2018. An indie UK studio founded by Oli Clarke Smith known for working on 50 Cent Blood on the Sand and Until Dawn and Phil Crabtree known for Drop Dead Gear and Flick Golf. Paradise Killer is the studio’s first game.

It’s a murder mystery through and through. Almost like an Ace attorney at law game. Collect your evidence, connect the dots and see where the evidence takes you. Connecting all the evidence and finding the truth was satisfying. But when the truths are uncovered even though it’s right you may not like the outcome. I felt bad for having to deal justice to some characters I had grown to like and were Lady Love Dies oldest friends. I probably could have not gone with them but the evidence was undeniable. Which prompted me to do another ending run and you can if you possibly stick to the true guilty syndicate members, not the ones that got caught up in the mess.

The syndicate is a group of immortals that were once human that serve different roles in the sequence. From Akiko the grand marshal that is the military/ police force to Lydia and Sam Daybreak lovers and former assassin’s turned ferry woman and bar master. When Paradise Killer starts half of the syndicate has already been moved to the new Sequence while the murder of the council members put the rest in lockdown.

The sequences are like parallel dimensions to the earth. Humans are abducted from earth and made to serve the council and woken gods. Then are mass sacrificed when the world dies at the end of a sequence. The worlds always end the same. Demonic Corruption either takes hold of the citizens or a god tries you persuade a syndicate member to let them destroy the world. 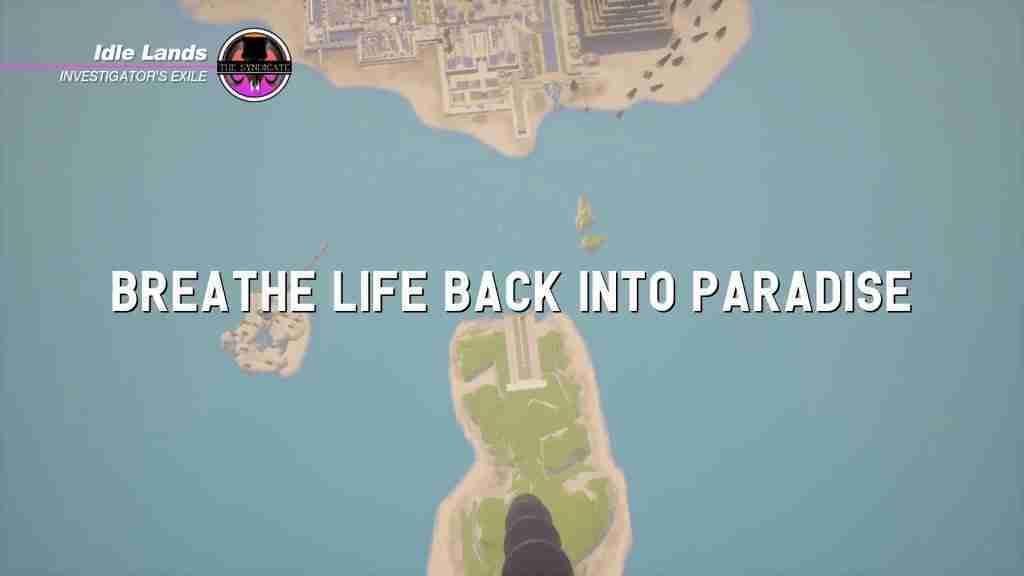 A Wonderful World to Explore

This is a game where it pays to explore and you’ll find important evidence. Additionally, you stumble upon other game references like a Resident Evil 4. In an interesting choice Manual saves are the only way to keep progress on Normal mode at least. Don’t fret though there are save points everywhere and using blood crystals unlocks save point specific Starlight skins. A major win for Paradise Killer is there is no fall damage amen! Once I figured this out it made getting around so fast especially after getting the dash and double jump upgrades.

The game ran smooth as butter while I played it on Steam. The jump is all the way weird, almost like you need to build up momentum first. If you don’t you just have a weird up and down no forward movement jump. There are puzzles in the form of nightmare computers that use an image match to unlock hidden areas and doors. The main gameplay is exploring and discovering the secrets around you. Everyone has a motive it’s put to you to decide if they should be punished for it.

A downside aside from no achievements is the limited replayability. If you collect all the evidence and do your job then I can’t see how you would do multiple runs. In normal mode, you can save before you start the trails and try different outcomes which is what I did. Facts and Truth are different in Paradise Killer forcing you to choose between the evidence, the greater good and your own beliefs. There are many possible guilty parties, but who you pick will define your own personal truth. 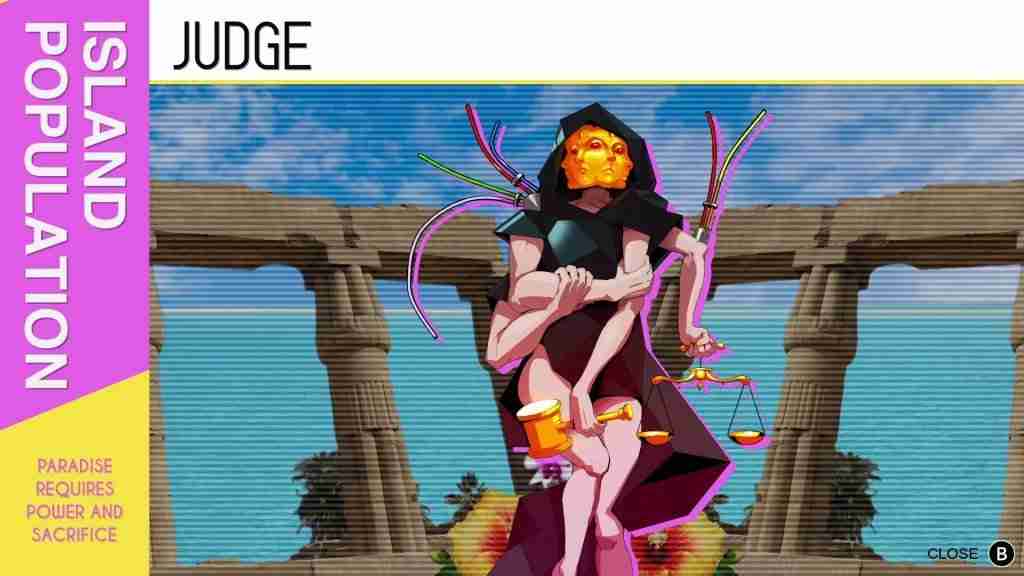 The ending is kinda ambiguous. Like did I really do the right thing? I followed the evidence and made sure the truly guilty people saw justice. It made me feel like I did something wrong. That ambiguity leaves it open for a possible sequel. After the trials, you have the choice to exile, execute or say farewell before you leave for sequence 25. Overall I had a fun time breathing life back into paradise in this indie game. The writing, music and all together presentation made Paradise Killer a game I recommend that you should play.

Pick this chilled out who done it murder mystery game up today! It’s on steam and switch and Breath life back into Paradise.