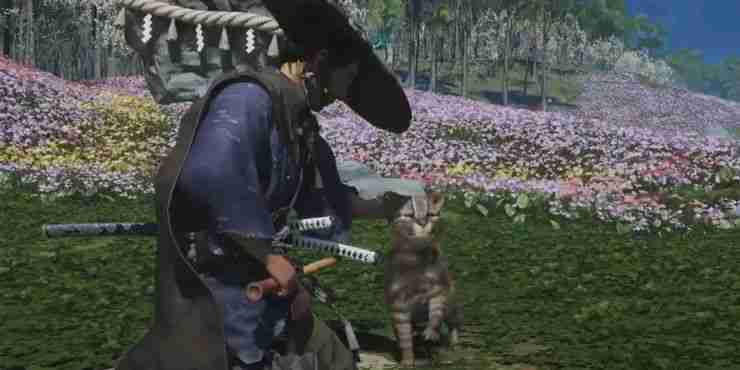 Ghost of Tsushima: Director’s Cut is coming closer to launch, and more information on the new expansion.  As we know it takes place on the nearby Iki Island.  It gives Jin Sakai a completely new story to undertake. But questions have been asked, such as how big is it and have they changed any gameplay mechanics. Push Square spoke to a couple of members of Sucker Punch and asked them about this and more.  The answers were left to Nate Fox, the games Creative Director and Joanna Wang, the environment lead

So how big is the Iki Island expansion?

This was answered by Nate Fox who said:

If you’re familiar with Ghost of Tsushima. Iki Island is the size of, really, the first act of the main game, Izuhara. It’s a big, dense story with a lot of landscape and secrets to discover.

This is promising news. Act 1 is Izuhara and it’s a substantial part of the campaign.  The potential for 10-20 hours of content is doable plus any other optional activities.

How long is the story?

Obviously, this will vary from player to player. This was also stated by Nate Fox when asked:

Yeah, it’s very similar in size to Izuhara, so… It’s an open world game, so it depends on how you play it. If you want to beeline through any one particular narrative aspect of Iki Island it’ll take different amounts of time. But the best example. — just because it’s an open world game — is to think of it like an act in Ghost of Tsushima.

And gameplay mechanics such as following the wind to lead us to a waypoint seem to remain. Here is what he had to say:

Iki Island is absolutely building on top of Ghost of Tsushima. but does add in a raft of new things as well. You know, new skills for the player to discover, new armour. — of course new stories. — and that’s what drives alot of the feeling of growth and newness when you play through the Iki Island experience.

How does Iki Island differ from Tsushima?

This was handled by Joanna Wang. She has this to say on what Iki Island is:

Iki Island is a smaller, poorer, more wild island than Tsushima. Another way to describe it is more mysterious. But for the overall Mongol invasion over there. Iki Island has a long h opistory of pirates as well as a history with samurai.

And visually does it look different than what we have seen in Ghost of Tsushima?

So with Tsushima we really focused on the bold colours. You know, you see those golden temples, red flower fields, and so the beauty and nature of the landscape is really what we tried to push for. And with Iki, we’re continually trying to do that same thing, because that’s what we’re really passionate about. — this is the identity of Ghost of Tsushima.

But we are trying to use a different colour palette for Iki. You may have seen in the trailer, there’s a wisteria forest. and you can see the purple flowers hanging over the vine and swaying in the wind. So that’s one example of how we’re thinking about pushing for a visual difference between Iki and Tsushima.

Do we know anything on the lip sync?

There is more in the interview so if you wish to read more about what to expect in Ghost of Tsushima: Director’s Cut, then it’s available here.