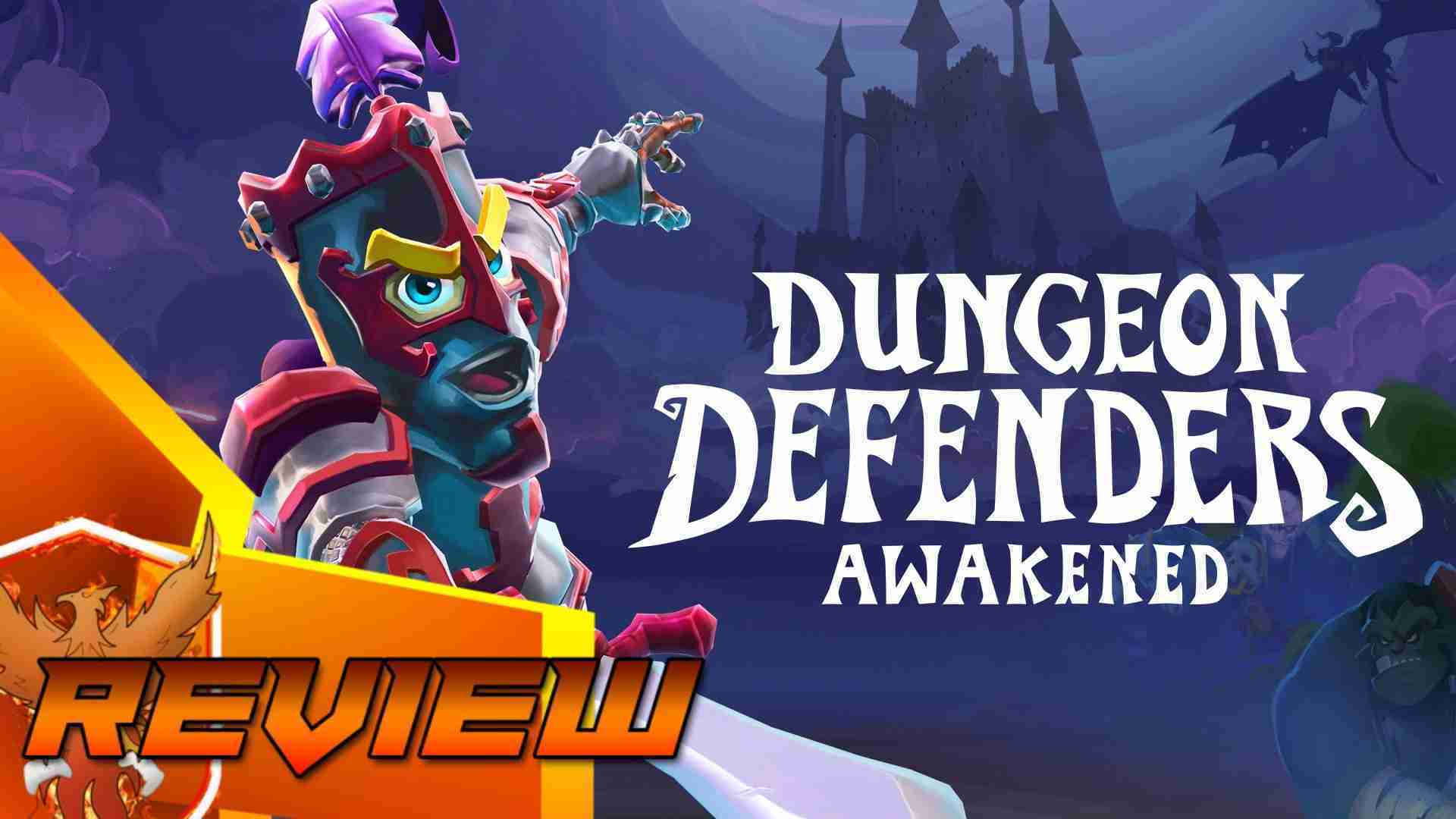 Dungeon Defenders: Awakened is a game developed and published by Chromatic Games. The game was originally Kickstarted back in 2019 and released on PC in 2020. The game is a hybrid between a tower defense game and an action RPG. The game is the third game in the Dungeon Defenders series and also acts as a reboot. The Xbox release is a timed console exclusive as it will be releasing on PlayStation 4 and Nintendo Switch later this year. The game also is releasing on console with all of the added updates the PC got post-launch, but can this grab people’s attention – read on to find out.

When first booting up the game, the player is greeted with a beautifully animated cutscene that gives the premise of the game. Dungeon Defenders: Awakened is set in the land of Etheria where four heroes guard against an ancient evil known as “the old ones.” The heroes used the power of Etheria crystals to lock away the old ones and brought an age of peace for a time. Then an Etheria crystal accidentally broke which set an evil army of orcs, demons, goblins, etc. loose on to the world. Four heroes – the Squire, the Huntress, the Apprentice, and the Monk battled the evil army before someone getting sucked into a rift in time and being flung back to the past to the events of the first game, where their power was drained thus restarting the franchise. I got to say this opening sequence reminds me of the 2009 Star Trek reboot by JJ Abrams. It allows the first two games to be cannon while also reliving the first game’s highlights. My first gut reaction was that this plot is window dressing and really has no bearing on the game, that it is just a tool to contextualizing what is going on around you. While my initial thought was kind of true, the game’s campaign had some cool live storyboard cut scenes with the narrator moving the plot along making it feel like the story isn’t a complete afterthought. On the note of the game’s campaign, it is separated into three acts with each act ending with a boss fight.

The game’s composer made some medieval-sounding tunes and it really fit the mood, I can hear various instruments most of which I probably don’t know the name of, but the most prominent one featured was the flute. Also, the game only had to pay one voice actor as the narrator is the only person with dialogue. That’s not to say there was only one voice actor in the game, but everyone else was relegated to grunts similar to that of Link from the Legend of Zelda series. Honestly, the music isn’t anything memorable because it sounds like stock audio. As far as critique goes, it’s a good thing when the music blends in so well that you aren’t paying attention to it, because if you notice it then something must have gone wrong. So I’m not sure how to solve the memorable problem, but I can lift this music and put this in any sword and sorcery movie or game and it will work and there is good and bad with that.

Dungeon Defenders: Awakened was developed using the Unreal Engine. The game runs at 1080p and 60fps. The game was developed for the Xbox One and does not appear to be optimized for the Series X. That’s ok though, as the game’s simple cell-shaded art style and stable frame rate make the game look beautiful enough. One can reasonably assume that a Series X patch could happen. Lastly, on the note of visuals, each of the game’s levels are designed very differently from each other, making each level feel very unique/distinct from one another. Some levels are in dimly lit dungeons and others are in bright well lit areas and each level uses a different color palette as well.

You only get one chance to make a good first impression. This game did a terrible job at acclimating new players to the franchise, I should know, because I have not played the previous two entries, and there were times when I noticed that this game assumed I should know something about the game’s mechanics and systems. This game’s tutorial is not good, a mediocre tutorial will tell you what to do and about the game’s mechanics and systems… this game didn’t even do that! The tutorial could have benefited from the narrators telling me what buttons to press because it wasn’t obvious to me. When the game’s tutorial began, I was put in a room and I assumed I needed to explore the dungeon but as I was traveling all the doors were blocking me off and I was walking in circles in this room and nothing was happening. If only the narrator’s voice or some NPC showed up as a guided assistant in the vein of Navi from Ocarina of Time going “Hey! Listen.” This game could use that. On the screen, it told me to press the select button to proceed and I pressed it and nothing happened. I spun my wheels for about 10 minutes before I realized that I needed to hold the select button to proceed with the tutorial. So I’m already starting to think that this game chose death.

Another issue with the tutorial is that without a voice telling you what to do, you can easily overlook/skip something the game is trying to tell you. This led to moments of frustration where I’m left wondering “Why didn’t the game tell me that?!” Tutorial issues aside, the game is divided into three phases, the warm up phase where the player can explore the level (map) and get the lay of the land and start to pre-plan certain defense strategies, the build phase where players uses their resources to build defenses, and the combat phase, where a wave of enemies are trying to make a march to an Etheria crystal that the player must protect. In practice there are really only two phases as most times I would just ready up and go straight to building as there isn’t a time limit to the building phase (some exceptions apply). When it comes to the building phase, there are many types of buildings that have different ranges, properties, and costs to construct. Combat is very simple at first as the first hero you are introduced to is the squire who fights up close with a sword.

As the tutorial progresses you unlock the rest of the heroes. In single-player, you can switch freely between all the heroes as each hero has a unique building that the others cannot build. Once you are done building you need to select which hero you want to fight with because the combat phases won’t allow you to switch between heroes. After the combat phase is completed it resets back to the build phase where you can collect loot/inventory and use it to build again for the next wave. The combat phase becomes more intricate as each hero uses a different fighting style and it is nice to play around with different combinations of defenses.

Each hero has their own level which means you need to grind with all the heroes as leaving one under leveled does not benefit you because inventory has a gatekeeping mechanic where items cannot be equipped if a character is under a certain level, in other words, you need to be this tall to ride. All the inventory can be buffed with skill points earned as you level up and weaker inventory can be sold off for gold to be used to upgrading the inventory you still have.

Due to this game having already been out since last year on PC, the console launches with more content than what was first experienced by PC players, namely that there are actually more than just four heroes and there are extra optional chapters in the campaign called “Encores.” The console version also includes the “Transmog” system which allows players to customize character’s looks without sacrificing stat boosts.

Lastly, there is more than just one game mode other than the campaign and that includes a survival mode, a challenge mode, a mixed mode, and a pure strategy mode (where it’s only tower defense, no action RPG combat) all of which, including the campaign, can be played in cooperative multiplayer in public or private games. Do note that I didn’t test the multiplayer during the review due to the game not being out publicly on console. One last thing, I have to report that I did experience a game crash of all things it was after the tutorial, I was in the pub which acts a central hub, and while casually exploring, the game decided to crash, luckily the Series X has fast load times and I was back in action very quickly. I have have had issues with my Series X deciding to crash when running an Xbox One game before so I thought nothing of it.

The tower defense genre is not a widely popular genre to a general audience. So if you want to do a game in this genre there needs to a unique hook to capture the audience’s attention. Dungeon Defenders: Awakened bet big on the action RPG angle but for me, this game falls short but I’m not big on the tower defense genre. Having played this I can appreciate the good that went into Dungeon Defenders: Awakened and it’s because of that I give this game a 6/10.

The game is out on Xbox One and Series S|X on March 17th for $29.99. A review code was provided by the publisher for purposes of review.