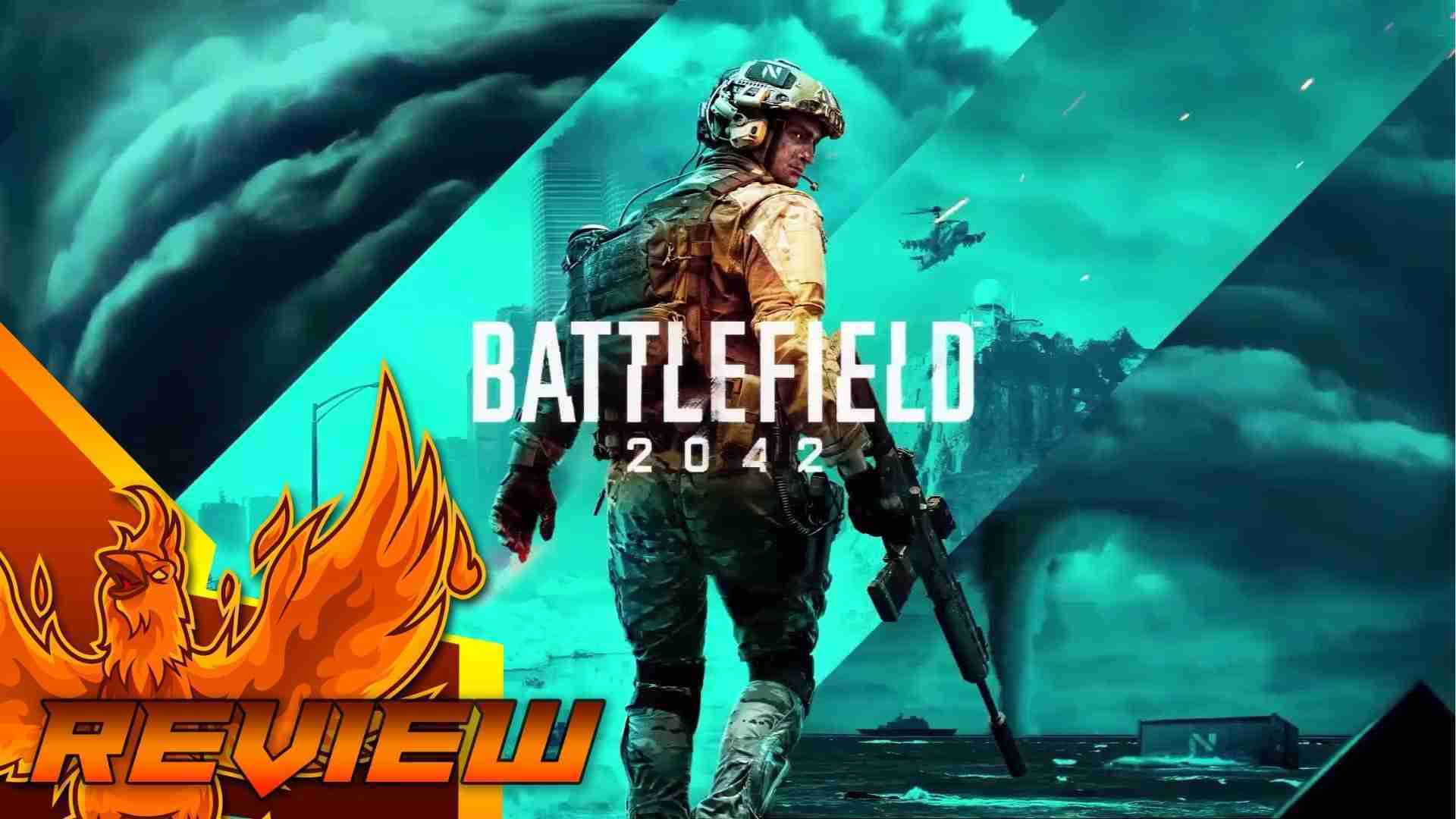 Chaos and fun often do not go together but when it comes to Battlefield 2042 it’s the simplest way to describe my experience. Developed by DICE and published by Electronic Arts (EA) and will have a full release on November 19, 2021. Before I continue thank you to EA and the EA Creator Network for providing me with an Xbox Series X digital copy of Battlefield 2042. This game is a multiplayer first-person shooter. It is an online-only experience with game modes that allow for up to 128 players at once. Also, tanks, hovercrafts, helicopters, and even a wingsuit are a few ways to travel across the large maps. Battlefield 2042 is the 6th installment in the Battlefield franchise. This entry has found a way to incorporate old mechanics with some interesting new ones.

Now first and foremost it has to be said that this game does not have a single-player story mode. Even though I would not play the story mode that often I do believe that it will be missed. DICE has historically created some intense and engaging single-player experiences but not this time around. So, a large portion of the story of Battlefield 2042 can be experienced on the official website. Through short stories and films, you get the gist of the new world structure.

Within 10 years the world as we know it today fell apart. Economies falling apart at the seams, global warming causing extreme damage, and broken alliances are terrible ways to kick off the 2030s. In 2033, Hurricane Zeta causes mass destruction as the Earth’s first category 6 storm. The second great depression rises due to global food shortages. Then the European Union falls apart after Germany’s downfall.

The specialist you will be using in the game is No-Pats. These are the people who will not go back to their home nations or are unable to do so. A global blackout caused by space debris destroying 70% of satellites leads to distrust between the remaining superpowers. A shadow war between the US and Russia begins over food and fuel. The boots on the ground are recruited No-Pat Task Forces who are choosing what’s best for their future.

Battlefield 2042 when it has no hiccups is a pretty game. It’s a strange way to describe a game full of violence but the weather systems and maps make for a scenic experience. I have been playing on an Xbox Series X, and visually the game holds up. I have experienced the textures and even grass disappearing a few times but nothing graphically game-breaking. The specialist designs are well done and have clear distinctions between them. DICE even did a solid job with French Specialist Sundance’s curly hair.

The weapon designs are varied enough to where you can even identify them when they fall to the ground. When choosing a place to spawn in-game the map is shown from a satellite point of view. The map showcases real-time gameplay and when teammates mark enemies they show up as markers.

Broken glass, grenades floating over your specialist, and explosions in the distance are detailed and immersive. Even though there are a few popping issues that I experienced but it’s leagues better than the beta experiences from last month. They have fixed the lighting issues that many people were experiencing.

To be honest it is always interesting how the developers make all these intense sounds layer together so well. One would think having explosions, helicopters and even tanks firing their weapons all at once would be overbearing. The sounds have been distinct and crisp during my time with Battlefield 2042. I have yet to have the need to adjust any of my audio settings.

The ability to have an idea of where the gunfights are based on sound alone is solid even off of the TV audio. With headsets, the experience is heightened. While in combat it seemed that the enemies’ footsteps were a bit louder when they got near. Overall the sound of the weapons, vehicles, and sounds of the specialist calling for a medic, is above average for sure.

If it was not clear this game is online-only, which means you need to be connected to the internet to play. There is also crossplay but I will say I have experienced quite a few issues while crossplay was active. An error would pop up on my screen saying my internet was not good enough, also sometimes I would load into a match and not be able to adjust my loadout. Hopefully, soon they patch out these issues.

Now for what you have been reading all this for, the breakdown of the gameplay. DICE has truly merged the greatness of the Battlefields of old with a twist of modern first-person shooters. I would be lying if I did not mention that I was nervous about them going the specialist route. Certain gadgets I wish were available for all specialists but it does not take away from the overall experience.

Moving around the battlefield is an experience especially if it’s your first time playing a big battle game like this. You can be making your way to A1 and get sniped from a mountain near A2. This can be frustrating at times but it adds to the immersion of being in an all-out battle.

Moreover, when it comes to traversing the map vehicles have a bit of a learning curve and I was not the best of drivers. The vehicle controls did not feel impossible I was more impatient. So constantly going full speed with no real plan caused me to be taken out easily. You will see some top-tier drivers and pilots while playing.

Even though there is a decent amount of destructibility in terms of the environment, more would be better. The big map alteration events of previous titles seem to be missing. Even with the giant tornados/storms, the map stays relatively consistent throughout the entire match. This is a missed opportunity because the current maps look as if some epic changes could happen and it doesn’t. Hopefully, this is something they add in future maps or game modes.

Now on to the shooting and gunbattles. Typically you can find me poorly sniping a majority of the time. So “Casper” was the natural choice he has a ghillie suit, movement sensor, and a recon drone. The drone marks enemies for your team to see while the movement sensor alerts you when an enemy is near. The recon drone if used properly can aid you in becoming one of the players of the games for most kill assist. Shooting is satisfying in this game. The recoil for each weapon feels fair. The ability to adjust weapon attachments on the go is a game-changer. It allows you to adjust to any combat situation you come across.

You Are Heavily Rewarded For Playing Your Role

Personally, having a positive kill death ratio or KD is usually a pipe dream for me. What makes Battlefield 2042 special is you can earn experience by doing more than getting kills. Reviving, refilling ammo, setting up a spawn beacon, teammates spawning on your location, etc. You can be a top 10 player in a match simply by marking enough enemies in Breakthrough or Conquest. When properly utilizing your specialist abilities you help your side win. This also helped me always feel as if I am contributing. Especially if you’re playing a game mode where the number of reinforcements (lives) matters. You may not be the best shooter but you will gain plenty of points for keeping your team alive.

Speaking of reviving, a lot of people will hear your specialist yell out for a medic but it’s not often you will be revived. It’s not clear why this happens but it does and it will frustrate you a bit. Moreover, the different types of game modes.

So far there are three major game modes, All-Out Warfare, Hazard Zone, and the Portal. All-Out Warfare is where you will find the big battles. 128 players on one map fighting for victory. Conquest is basically large-scale domination where you have to control the most zones for the longest amount of time. Breakthrough for veteran Battlefield players is the new Rush. The point is to constantly take enemy defended points before your reinforcements run out. Hazard Zone is a new tactical game mode that is objective-based. Players are divided into teams that each are competing to extract data drives. Finally, the Portal is the big sell of this game. Players can now create customized multiplayer modes. Not only that players can use maps from past Battlefield games.

The level of customization is intense. With the editing tools provided by DICE you can as they say on the site “change the rules of war”. You can start off by picking what game mode you want. Then create up to a 20 map rotation based on the available maps. For example, Rush mode will offer six maps to choose from. You then pick the game time and even how many reinforcements are removed per kill. For those looking to create a challenge, you can even disable the ability to ping targets. A small part of me is worried that the Portal game mode will spread the player base thin over time. Hopefully, I am wrong and I’ll be able to easily find a full conquest lobby in the future.

Battlefield 2042 combat is fun and there are enough game modes for you to enjoy. If you want to shoot down an enemy helicopter then glide with a wingsuit into an enemy-held point, you can do that. This is one of the few games where you can truly get creative in the way you accomplish your goals. Use the specialist with the grappling hook and set a spawn beacon for your team to infiltrate an enemy position. The combat is intense and chaos is par for the course in this game.

Overall I give this game a 7.8 out of 10. It has solid mechanics and fun gameplay but it is missing the extreme destructibility of previous titles. The issues I experienced with crossplay even though it was easy for me to fix it still need to be patched soon. Battlefield 2042 is available to preorder on PC, Xbox Series X|S, Xbox One, PlayStation 5, and PlayStation 4. It will officially launch on November 19, 2021. Thank you to the EA Creator Network and EA for providing me with a digital copy of the game.

Chernobylite – A Game Worthy Of A Crown