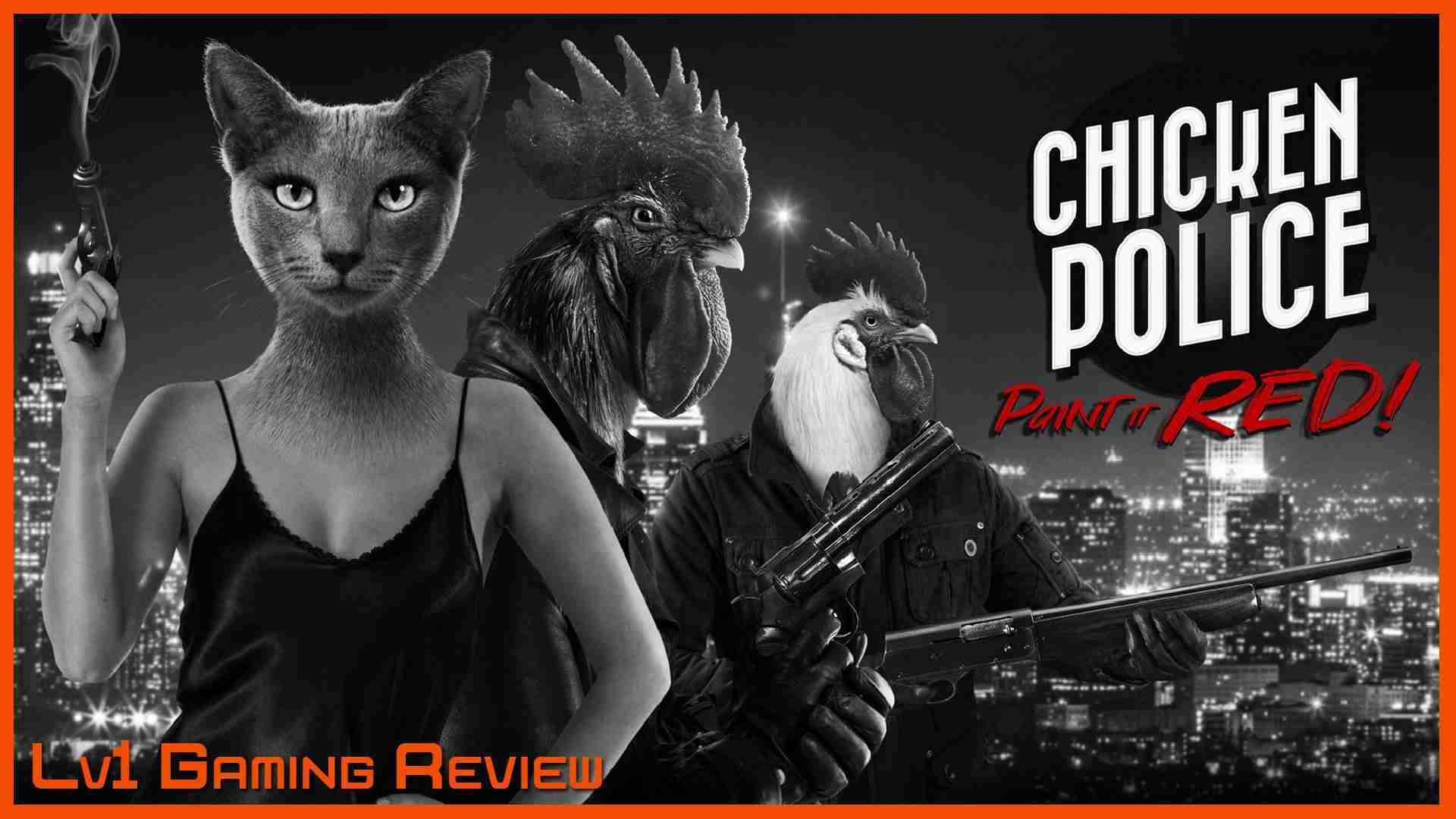 Take Caravan palace’s Lone Digger music video, add a healthy spread of 30’s and 40’s noir detective radio shows and movies with anthropomorphic animals and you have Chicken Police- Paint it Red. Chicken Police is a noir detective buddy cop text adventure filled with puns, talented art design, and immensely talented voice acting. It draws heavy inspiration from the golden age of cinema from movies like The Big sleep and Gilda and games like LA Noir and Grim Fandango.

It was developed by The Wild Gentlemen and indie studio based in Budapest, Hungary. This is a very talented team with members of the team who have worked on projects like The Witcher 3, Call of Duty WWII, Ryse: Son of Rome, and more. While individually most of us have been in the games industry for over a decade, Chicken Police is the first project under WIld Gentleman. As far as I know, this is available on all systems I’m not sure about PS5 and Xbox Series though.

Paint it Red is set in Clawville a once beacon of cities where everyone could live no matter the species but the city has fallen to hell. It has ghettos for insects and reptiles. Mobsters running the city, police so crooked they’d put the leaning tower of Pisa to shame, and a brewing civil war that could break out at any moment. It reminds me of the old radio shows I used to listen to like Johnny Dollar, Boston Blackie, Dick Tracy, and many others.

We get to play as Sonny or Santino Featherland an at the end of his rope suspended cop that while waiting for his forced retirement takes a request to help one Natasha Catzenko. In this point and click game which is also one of my favorite types of games you quickly realize the story starts as something small simple threatening messages. It then rapidly devolves into a complex, twist-filled story that only you as Sonny can solve. A story very similar to those classics to those radio stories and movies. 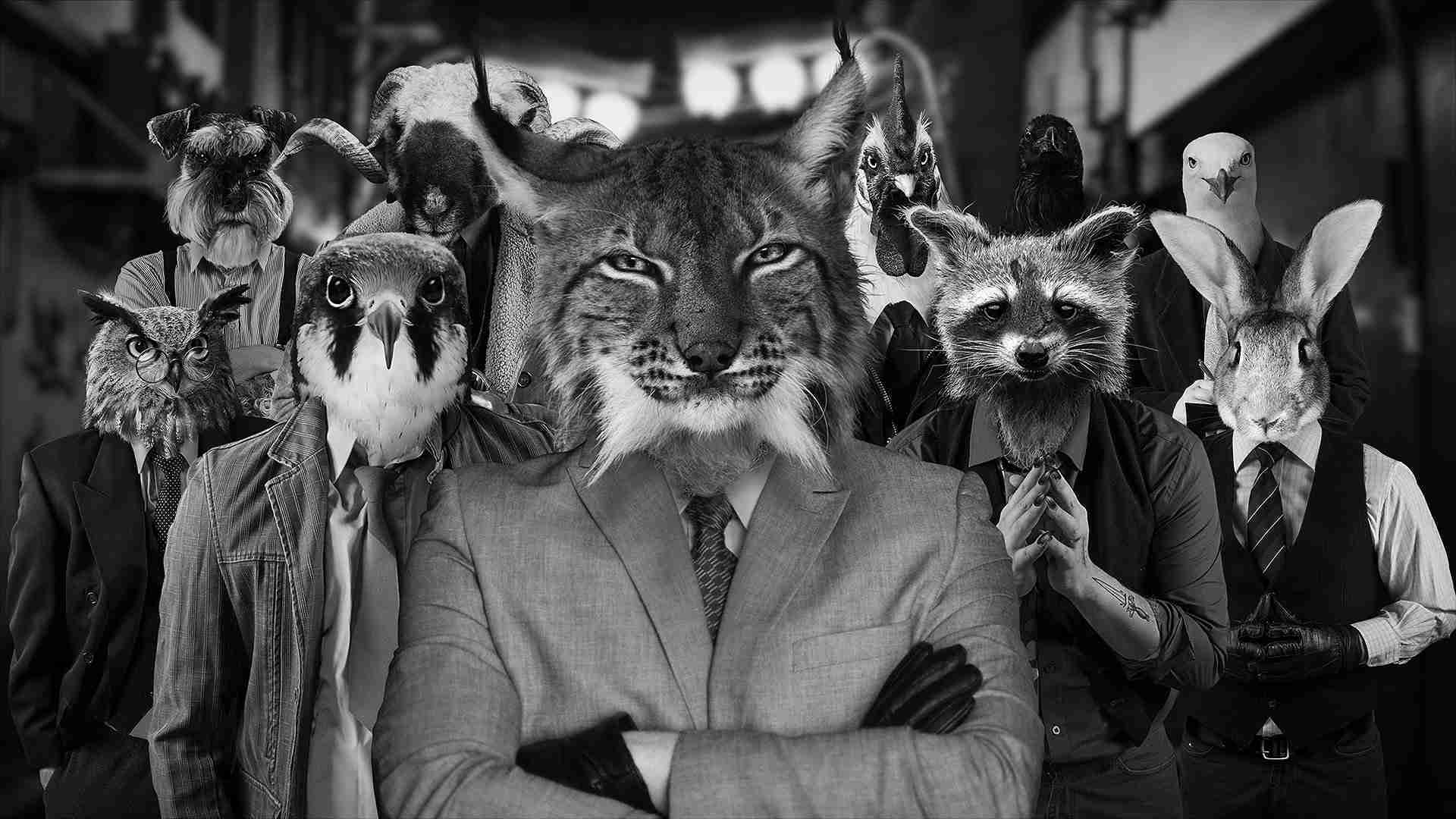 In my almost 10 hours with this, it’s easy to see this game has some damn good photoshop. Everything moves the mouths when talking, tails, they blink and eyes change based on expressions. This is some of the most detailed photoshop I’ve seen in a long time. The animal parts blend almost seamlessly with the human bits. Additionally, there are no jagged lines or leftover cut out bits that can sometimes happen with photoshop.

As you can tell color is only used for important moments of objects like Natashas eyes, the Message to Natasha, or Blood. Sonny even comments the longer he said a cop and stayed in Clawville the more the colors left. Something I’m impressed with is there are no repeating animals, every character is unique. There has to be at least 8 or more background characters you never interact with like the Lemur in the Sweltering Nile brothel or the big buck in the czar club. However, there are many animals not included and in the end, they have a blurb of animals not included due to them being recognized as extinct.

I think this may have originally been a pixel game. In the extras gallery where you can see your collectibles, cutscenes, and concept art there are a few pixel arts of Sonny and Marty. I’m glad they went with the style they have now. Not that I dislike pixel games in fact the opposite. I feel this is a better way to convey the mood and story the game has. I feel with this art direction you really do get to either fall in love with some characters or hate others.

Something that adds to the love or hate of the characters is the immensely talented voice acting especially Sonny. He really sells the Noir detective at the end of his rope. Kerry Shale is Sonny who has also voiced roles on Thoman the Tank Engine, State of Mind a game I just streamed, and Horizon Zero Dawn just to name a few. Natasha was played by Jules de Jongh who was Cora Harper in Mass Effect Andromeda, She also voices characters in Thomas the Tank Engine. She, like Kerry, has a long career in voice acting. Additionally, the other voice actors have done a fantastic job with this game. 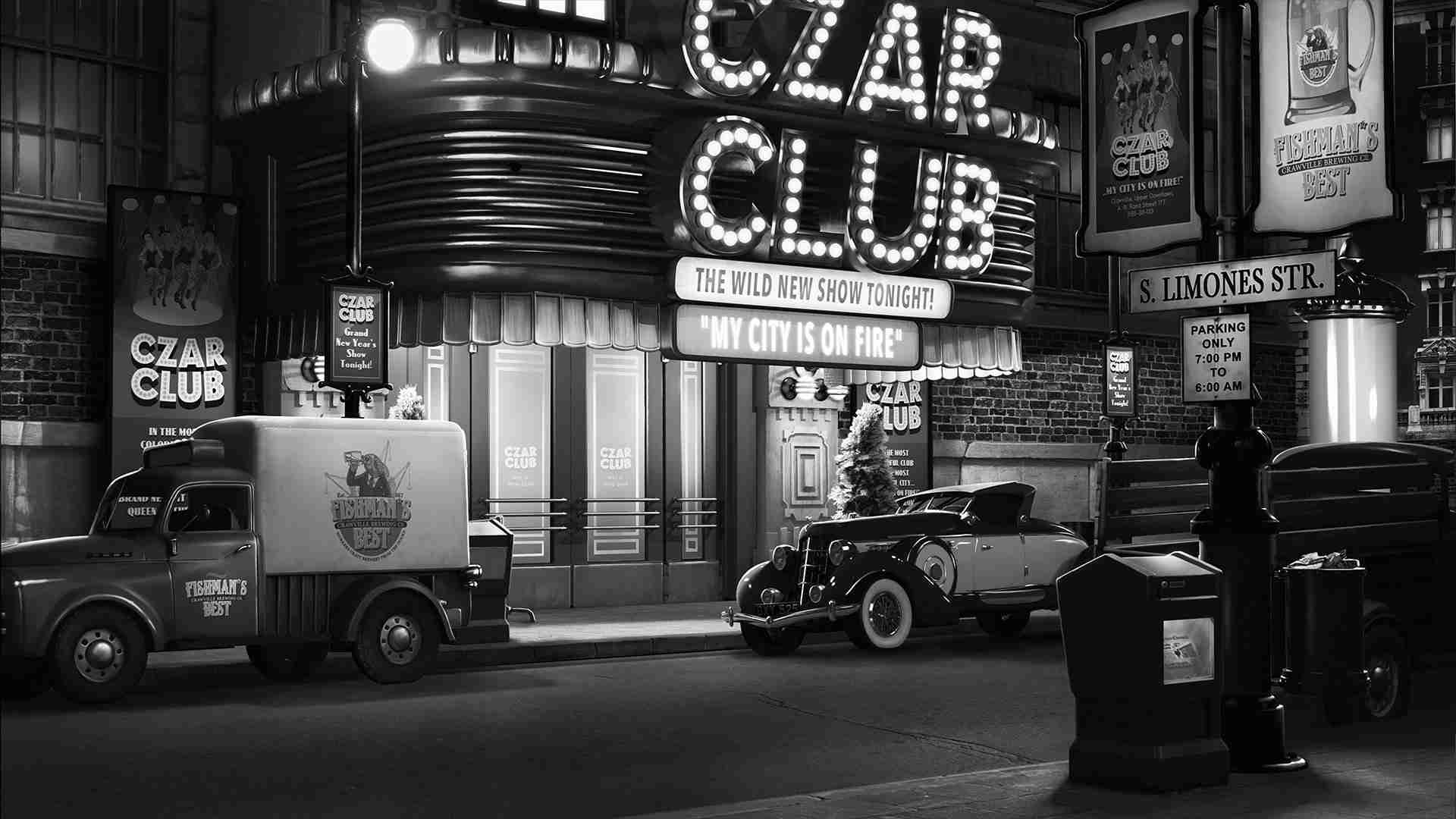 Like I stated Chicken Police- Paint it Red is a point and click game. In its 4 chapters, there are a whole host of characters you have to talk to, ask questions to, and interrogate. You get to go to a variety of locations as well from the glamour Czar club, The Sweltering Nile, a brothel run by a Crocodile to the run down Insane Asylum. You get ranks based on your questions and focus of questions asked during interrogation sections. There are even evidence recap sections at the end of chapters where you piece together and go over what happened in the chapter.

Additionally, there’s a shooting range almost Wolfenstein or GTA 5 style which helps you get a feel for the 2 car shooting sections kind of like near the end of Yakuza. At least 0 and Kiwami. There’s an extra’s gallery, collectibles, codex entries, profiles to collect which you will miss on the first playthrough. So it has an incentive to replay it if you’re a completionist. As you replay you can also work on getting better scores on the interrogation parts.

Chicken Police has a great noir style of jazz music. You know the type I’m talking about a little slow and soulful something that wouldn’t be out of play in a Humphrey Bogart movie. You get pulled in with the visuals but the voice acting and kill soundtrack that I hope comes to vinyl one-day plunges you straight into the world. Additionally, Natasha Catzenko has a singing number and the whole song is fire. Though it really reminds me of the Else Lichtmann LA Noir number (I Always Kill) The Things I Love.

While overall I did love this game and the world of Paint it Red there were also some things that I have to point out. No game is perfect. These are minor things. I will admit It was hard to find faults.

There are some subtitles to speaking errors. Which makes me wonder were the subtitles done in the game first then audio or was it just forgotten to change? It happens every so often enough to draw attention to it but not enough to be maddening. Speaking of text and audio on the text autoplay which just means they keep talking without you having to click or press a button the audio would sometimes cut out. See minor things almost nothing worthy to jot down.

I am curious about a possible sequel in the works. The credits have to be continued at the end of them. A sequel could tie up some of the loose ends like what do the Chicken Police Sonny and Marty do now? It could also dive into Molly Sonny’s ex-wife and daughter, Who is Natasha really and where does she disappear to? I’d really like to see what happened to the city and the hive. They were pretty much on the brink of the city tearing itself apart. Even with the after-credits scene avengers style I still have so many questions.

Additionally, there’s this other storyline that never gets touched on but it’s hinted that Natshsa could be a former Czar daughter. Like the Romanovs of Russia and the myth that the daughter Anastasia actually made it out and wasn’t assassinated with her family. With how much they kept hinted at it I thought that storyline was going to go farther. Maybe in a sequel?

Overall, I fell in love with this game. Maybe it’s my love for the noir films of long gone. There is time, care and love put into this weird little game. I hope it’ll get a sequel. There are so many questions I think could be answered with a second game. I know this game won’t be for everyone but once you get over the animal heads and human bodies it dives into a gritty noir game. Definitely pick this up and tell me what you think about it or this review in the comments section below.

The Day I Became A God – The Complete Anime Review