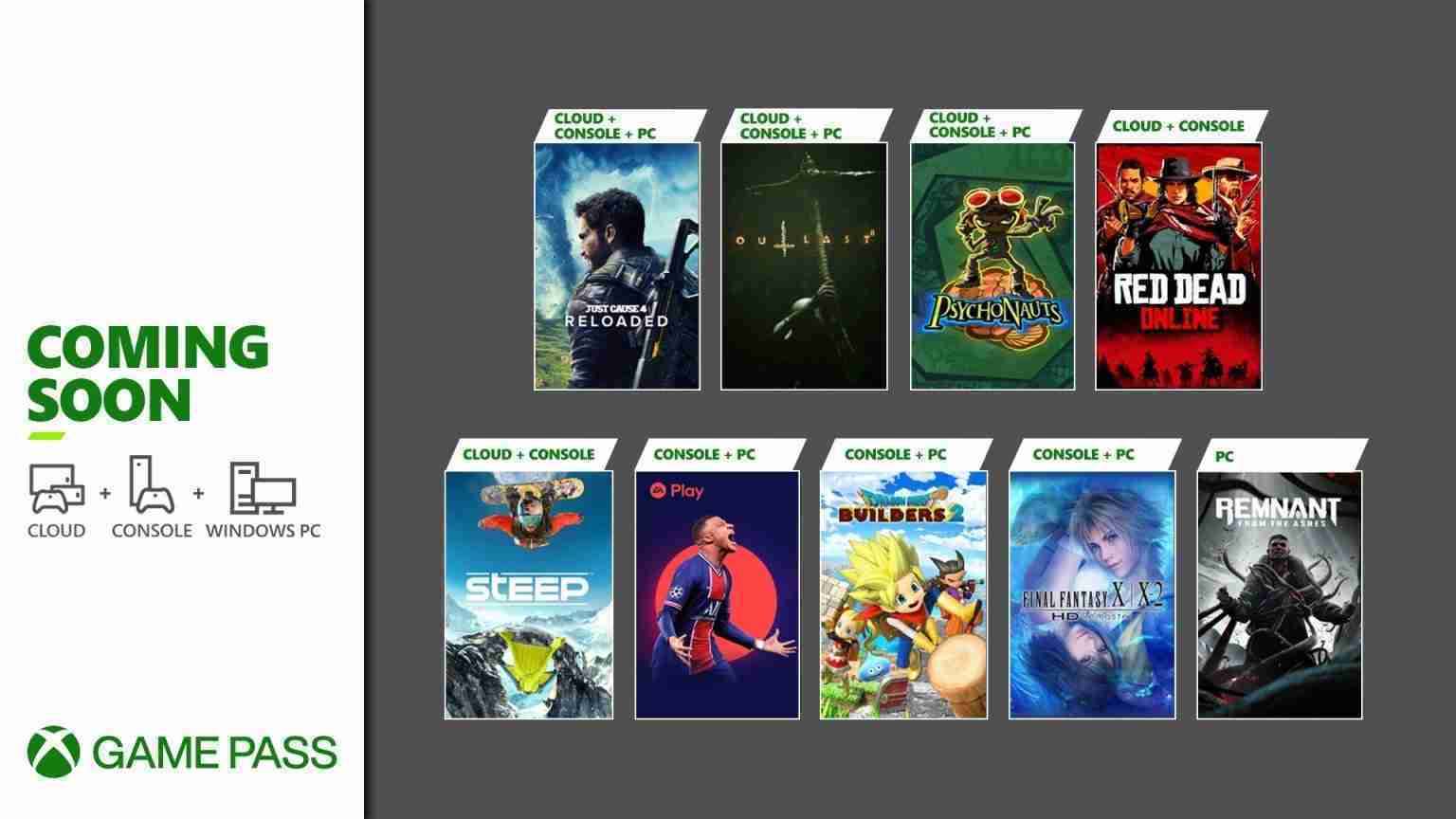 Few things in life are guaranteed. Life, Taxes, Death, and new Xbox Game Pass titles. This month is no different as gamers who are subscribed to Xbox Game Pass are being blessed with a new slate of titles. Here are the Xbox Game Pass May 2021 games which is headlined by Dragon Quest Builders 2. All news via Xbox Wire.

FIFA 21 (Console and PC) EA Play – May 6
Xbox Game Pass Ultimate and PC members can hit the pitch and get great rewards when FIFA 21 is added to The Play List with EA Play, including a fresh EA Play Volta Squad Boost and FUT Season XP Boost.

Outlast 2 (Cloud, Console, and PC) ID@Xbox – May 6
Sequel to the acclaimed survival horror game Outlast, set within the same universe as the first game, but with different characters and a different setting, Outlast 2 is a twisted new journey into the depths of the human mind and its dark secrets.

Steep (Cloud and Console) – May 6
Ride a massive open world across the Alps, where the powder is always fresh, and the run never ends. Tame the wilderness on the American continent in Alaska, a new region filled with challenges. The mountain is yours to explore. So, strap in, suit up, and drop in.

Just Cause 4: Reloaded (Cloud, Console, and PC) – May 13
Just Cause 4 Reloaded delivers an expansive and explosive experience with new weapons, vehicles, and gear included! Soar through the skies at high speeds using the Skystriker Weaponized Wingsuit or cruise the roads of Solís using the Deathstalker Scorpion Muscle Car.

Psychonauts (Cloud, Console, and PC) – May 13
A psychic adventure from the mind of Tim Schafer. Psychonauts follows the story of a young psychic named Razputin. Explore the fantastic realm of the inner mind – Join the Psychonauts!https://www.youtube.com/embed/bRijF8LENaI?version=3&rel=1&showsearch=0&showinfo=1&iv_load_policy=1&fs=1&hl=en-US&autohide=2&wmode=transparent

Red Dead Online (Cloud and Console) – May 13
Join millions of fellow players in Red Dead Online, now packed with years’ worth of new features, gameplay, and additional enhancements. Step into a vibrant, ever-evolving world and experience life across frontier America. Forge your own path as you chase down bounties, battle outlaw gangs and other players; hunt, fish and trade, search for exotic treasures, run Moonshine, and much more to discover in a world of astounding depth and detail.

Remnant: From the Ashes (PC) – May 13
The world has been thrown into chaos by an ancient evil from another dimension. As one of the last remnants of humanity, you must set out alone or alongside up to two other survivors to face down hordes of deadly enemies to try to carve a foothold, rebuild, and retake what was lost.

Fallout 76: Locked and Loaded Update
Upgrade your C.A.M.P. with the all new C.A.M.P. slots to experiment with your new designs, while S.P.E.C.I.A.L. loadouts can prepare you for any challenge with a quick skill swap. Also, dive into new Daily Ops expansion for new combinations and game mode: Decryption! Learn more here.

Gears: Tactics Anniversary
Gears: Tactics celebrated its one-year anniversary this past week. Hop in this fast-paced strategy game and experience the action-packed story on console or PC. Build your squad, hunt an evil mastermind, rise up, and fight.

Grounded April Update
Photo Mode is now available in multiplayer games along with some new character poses, Creative Mode now includes passive creatures in the yard, the addition of new building pieces and usable ladders are sure to be exciting, and more quality-of-life changes!

Halo Infinite PC Update
Xbox Game Pass for PC members have a lot to look forward to in Halo Infinite on PC. To get the scoop on PC specific features coming to Halo Infinite, check out 343 Industries’ Inside Infinite blog on Halo Waypoint.

Minecraft: Free R2-D2 Beanie – Available until May 6
In celebration of Star Wars Day on May 4, Minecraft is giving away a free R2-D2 Beanie in-game through the Marketplace. Be sure to jump in and claim before May 6!

Sea of Thieves: Reapers vs. The World – Available until June 22
In response to the Trading Companies’ rallying cry for Emissaries, The Reaper’s Bones are making a power play this Season! In each phase of the Event, they’ll target a particular Trading Company’s Emissaries and dispatch their own Emissaries to take up the hunt. Bonus reputation is up for grabs for both the hunter and the hunted, and there are special challenges to tackle too!

Get ready, because we have a huge batch of Perks set to launch tomorrow on May 4. Claim them in the Perks gallery before they’re gone!

NBA 2K21: MyTEAM Bundle – Available May 4
Assemble your Dream Team and dominate the court with this MyTEAM bundle. Ultimate members can run with two free packs, ball out with 5,000 MyTEAM points, or pull from the logo with cover athlete Damian Lillard’s Series 2 Amethyst card.

Spotify Premium (New Member Only): 4 Months of Ad-free Music – Available May 4
Play all your favorites with access to millions of tracks and podcasts titles. Ultimate members can enjoy ad-free music listening, music + podcast offline downloads, and on-demand listening with Spotify Premium for 4 months. Available for new Spotify Premium members only.  Make sure you check with your regions since the terms might be different. For full details, see the offer in the Perks gallery on console, mobile or PC.

Apex Legends: Star Wars Weapon Charms – Available May 4
Show the competition what you’re made of with your new Red Leader and Imperial Ties Weapon Charms, brought to you by EA Play! Equip these to your favorite weapons and battle for glory, fame, and fortune in style.

The new Quests season launches on May 4 with a zombie theme along with double points for select weekly and monthly Quests. Plus, use the Force to sense a special one-day-only 4x Quest (or you can check Quests on your console or see all your Quests in the Xbox Game Pass mobile app!)

Here are a few of the Zombie 2x Quests launching on May 4:

What are your thoughts on Xbox Game Pass May 2021? Leave some suggestions on what we can do better or change. Are you interested in writing, editing or just being a part of Lv1 Gaming? CONTACT US HERE!