Xbox Game Pass Future Is Bright. Tons Of Games Are Headed To The Service 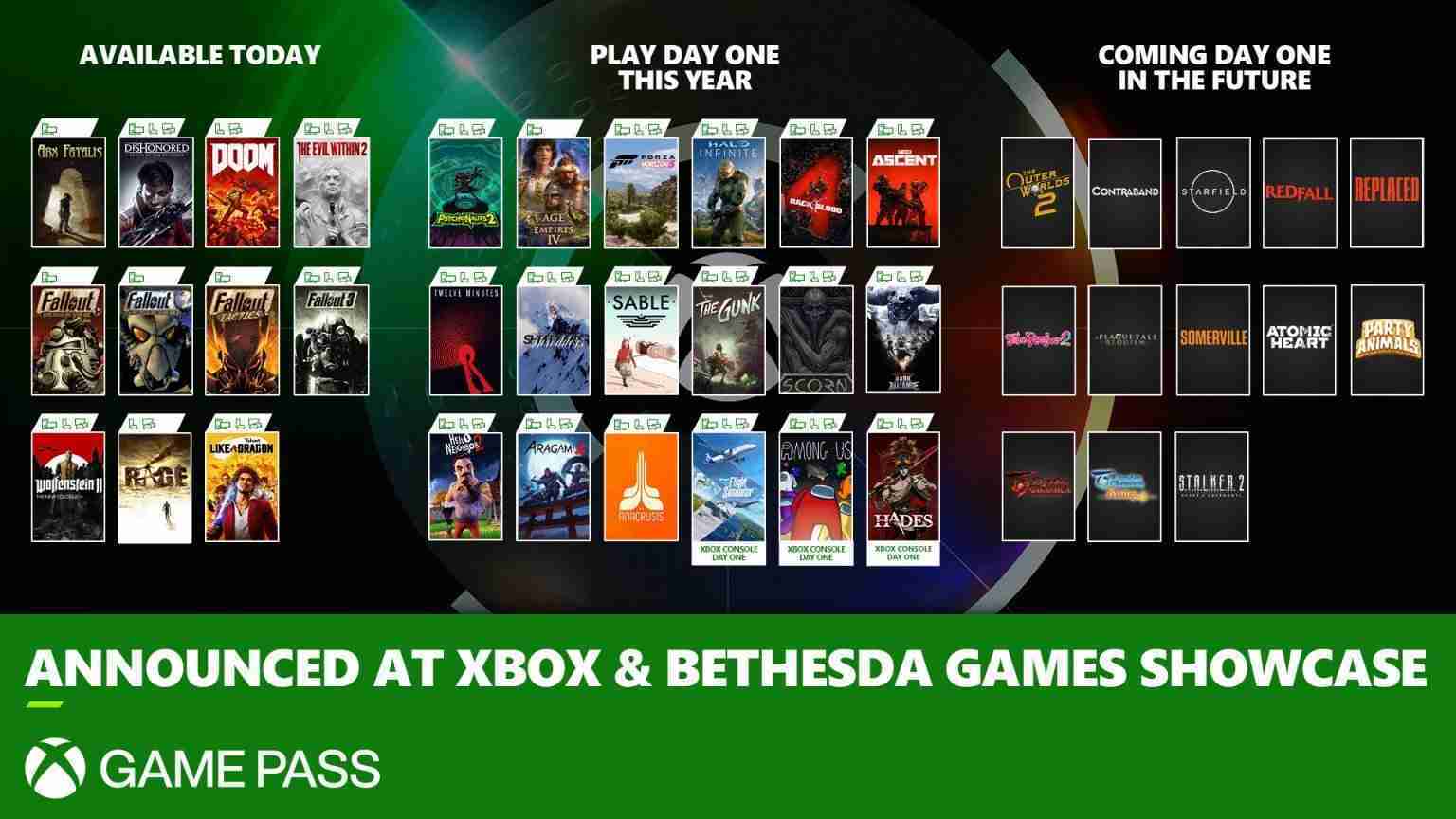 The Xbox Game Pass future is one to look forward to. Today during the Xbox & Bethesda E3 2021 showcase Xbox announced a ton of games headed to Xbox Game Pass. Microsoft seems to be close, if not there already, in making Xbox Game Pass the ‘Netflix of gaming”. Below is what you can expect to play starting today and some of what’s to come in the future. All news via Xbox Wire.

Yakuza: Like a Dragon (Cloud, Console, and PC)
Now you can play all eight games in the mainline Yakuza saga from Yakuza 0 to the latest installment, Yakuza: Like a Dragon! Become Ichiban Kasuga, a low-ranking yakuza grunt left on the brink of death by the man he trusted most. Take up your legendary bat and get ready to crack some underworld skulls in dynamic RPG combat set against the backdrop of modern-day Japan in Yakuza: Like a Dragon.

We’re so pumped Bethesda is now a part of the Xbox family and are thrilled to bring even more of their iconic games to Xbox Game Pass, today. Complete your Fallout collection, be the Doom Slayer, fight against evil regimes, and then some. Many of these games are available wherever you play – PC, console, or cloud. Keyboard warrior or console controller – we’ve got more games just for you. Whether it’s your first time with a franchise or you’re a seasoned veteran, we are excited for you to jump in. Here are all the Bethesda games we shadow-dropped today with Xbox Game Pass:

Arx Fatalis (PC)
This critically acclaimed first-person RPG from Arkane Studios takes the player on an amazing journey into the fantasy world of Arx. As your quest unfolds you will explore ancient temples, bustling cities and abandoned mines; unearth legendary artifacts and face terrifying foes.

Fallout (PC)
The first entry in the beloved Fallout franchise. Explore the devastated ruins of a golden age civilization. Talk, sneak or fight your way past mutants, gangsters, and robotic adversaries. Make the right decisions or you could end up as another fallen hero in the wastelands…

Fallout 2 (PC)
It’s been 80 long years since your ancestors trod across the wastelands. As you search for the Garden of Eden Creation Kit to save your primitive village, your path is strewn with crippling radiation, megalomaniac mutants, and a relentless stream of lies, deceit and treachery.

Fallout 3 (PC, Cloud, and Console)
An expansive world, unique combat, shockingly realistic visuals, tons of player choice, and an incredible cast of dynamic characters. Every minute is a fight for survival against the terrors of the outside world.

Fallout: New Vegas (Newly added for PC, Cloud, and Console)
Welcome to New Vegas. It’s the kind of town where you dig your own grave prior to being shot in the head… and that’s before things really get ugly. It’s a town of dreamers and desperados being torn apart by warring factions vying for complete control of this desert oasis.

Fallout: Tactics (PC)
In these dark times, the Brotherhood – your Brotherhood – is all that stands between the rekindled flame of civilization and the wasteland. Your squad mates will be dearer to you than your kin and for those that survive there will be honor, respect, and the spoils of war.

Rage (Cloud and Console)
In the not-too-distant future an asteroid impact left Earth ravaged. You emerge into a vast wasteland to discover humanity working to rebuild itself in a treacherous world. Survive and explore an expansive environment teeming with bandit gangs, mutant hordes and an oppressive government’s soldiers with exotic guns and gadgets.

The Evil Within 2 (PC, Cloud, and Console)
Experience visceral survival horror as you descend into terrifying domains in search of your missing daughter. Use weapons, traps, and stealth to survive an onslaught of horrifying creatures determined to rip you apart. Return to the nightmare to win back your life and the ones you love.

Wolfenstein II: The New Colossus (PC, Cloud, and Console)
You are BJ Blazkowicz, humanity’s last hope for liberty, on a mission to recruit the boldest resistance leaders left. Fight in iconic American locations, equip an arsenal of awesome guns, and unleash new abilities as you kill every Nazi in sight and spark the second American Revolution.

We’re not even close to done yet! We’re all about bringing you the biggest games to discover and play with your friends on day one (keep up with the day one news here), and we just announced a whole bunch more are coming. Day one for the game or day one in the Xbox ecosystem, we’ve got you covered.

Coming Day One This Year

Coming Day One in The Future

What do you think of the Xbox Game Pass future? Leave some suggestions on what we can do better or change. Are you interested in writing, editing or just being a part of Lv1 Gaming? CONTACT US HERE!