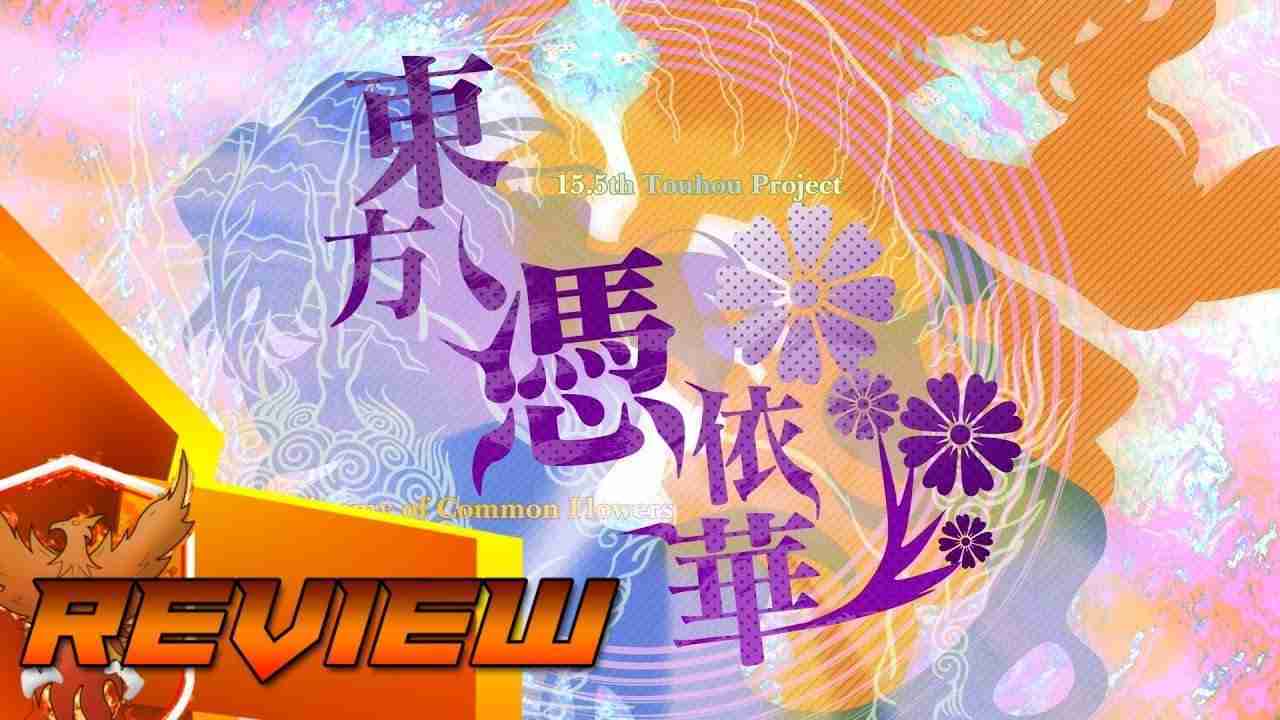 Touhou Hyouibana ～ Antinomy of Common Flowers is a mouthful to say but that’s the name of the game under scrutiny for today’s review. Developed by Japanese studio Twilight Frontier and published by Japanese company Phoenixx Inc, the game shows its Japanese influences not just in the game but in the name as well. I suspect something was lost in translation, as an antinomy is when two conclusions that were reasonably concluded independently from one another, also contradict each other. How are common flowers an antinomy? Who the hell knows. Here is my review of the fighting game that is Touhou Hyouibana ～ Antinomy of Common Flowers.

Ok, not going to lie here, I have rolled credits on this game’s story and I still had no idea what was going on. The only way for me to make sense of what I played is to do web searches about this game and after finding out that this game is a sequel, suddenly I understand why this game doesn’t take the time to catch players up with what is happening. Also, it turns out this game is the 15th (and a half) entry in a long-running series called Touhou Project which comprises mostly of bullet hell shoot ’em ups. Also, the main menu makes more sense when it reads “15.5th Touhou Project

So to recap, this game is a sequel to Touhou Shinpiroku ~ Urban Legend in Limbo also developed by Twilight Frontier. Following the events of this game, a phenomenon called “Perfect Possession” occurs, in which people have their mind and body completely taken over by somebody else. One of the characters – Reimu – sets out to investigate the cause of the Perfect Possession. Also (side note), a majority of the cast of characters are familiar faces to those who played previous entries in the franchise.

There isn’t much else to say about this game’s story mode. It’s very paper-thin as it follows a pair of characters for about 5 fights each before ending. It is what I would describe as a vignette since after finishing the story, you get booted back up to the main menu where you have to select the next pair of characters. What I found interesting is that the game only requires you to do the first two vignettes before presenting you with the credits and unlocking the hidden character on your select screen. I found it odd to not even have the player bother to finish the story in order to reward the player with the unlockable character. Also, rolling credits would signify to the player that they are done.

I will say it was definitely felt more confusing than satisfying to roll credits in under an hour. Also it is a bit of a disservice to the story that was written since the purpose is to explore the events from a different point of view. The last thing I will say about the story is that the game is told with no traditional cut scenes and no voice acting, instead the developers opted with characters idling on screen while high quality PNG images of character portraits and text boxes do all the work. Honestly, sometimes, I would just mash the A button to go straight to the fight since the game doesn’t do enough effort to make me want to care to read the dialogue. Voice acting would have gone a long way, it would help players become acclimated to the character’s personality and get a feel for who these characters are.

Definitely one of the saving graces for this game is this game’s soundtrack. From the main menu, you are greeted with this game’s main theme and it is an amazing piano ballad, and I am a sucker for anime-sounding soundtracks especially with pianos. The main theme reminds me of the opening theme of Secret of Mana for the SNES.

I would also recommend going to the music room in the main menu because you can freely navigate through this game’s soundtrack and most of the songs slap, and are perfect for a fighting game, some of them I can see working in a Street Fighter game. It should be noted that the game’s soundtrack is not fully unlocked in the music room and beating the story will unlock the tracks.

There is nothing much more to say in terms of audio, all the hits and blocks sound appropriate, the only complaint is the lack of voice acting, character make zero grunts or noise when fighting each other and that is something we’ve had since the Super Nintendo with Street Fighter 2 and Mortal Kombat.

The game is a 2D fighting game and is not what I would consider a taxing game on the hardware being used. The game utilizes sprites and its animations very effectively. I do not have capabilities of testing performance (such as resolution or frame rate) but based on my play time with the game I would peg the game as a locked 1080p / 60fps and that frame rate. The game can have a lot of projectiles on screen and not once did I detect a dip in the frame rate and as a fighting game aficionado, frame drops are easily detectable and can negatively effect gameplay.

Also shout out to the character portraits AKA the PNGs. Those assets definitely looked high resolution even on the Switch’s portable screen. Lastly, the game’s UI is standard and unobtrusive when it comes to fighting games – i.e. health bars, super meters, etc.

This is where things get real. I have many problems when this game’s design choices. For starters, this game does nothing to teach players about this game’s mechanics. This game has a spell card system where players have to choose between three spells at the start of the match and each has a different cost associated with it which means nothing to new players. What is the difference between a spell that costs 800 vs 1000 in battle? I still don’t know. Also 800 what? Can you at least say 800 mana or something? Also, this game’s training mode is trash. There is no menu that pulls up a character’s move set or any combos to practice. There is no way to run the game at half speed. There is also no way of visualizing hitboxes or hurt boxes, which is standard these days since even Smash Ultimate included that. The practice mode is so bare-bones that it only includes modifying the practice dummy to block or counter or tech.

All that aside, here is what I was able to gather. When you fight, who you pick first matters since they are referred to as the “Master” and the second character you pick is the “slave.” The slave character cannot do certain things such as super moves but also doesn’t deplete the health bar the same way since slave characters have a white health bar that increases when they are out. I found that slave characters are usually good for extending combos started by the master. Once you picking your winning combination, you need to select from 3 spells that cost 800, 1000, or 1200. The spells are essentially super moves and its is best to play around with picking them all (between different games) and experimenting until you find the one that best suits your play style.

During a fight the Y button is a physical attack move in the vein of a jab. Pressing Y three times in succession is what most fighting games refer to as an “auto-combo.” The B button is a projectile. The A button is also a projectile but it makes your character the projectile (like a tackle). The X button is how you switch from master and slave. The R button is how you block because this game employs the shield bubbles from the Smash Bros series but at least these bubble don’t shrink when getting hit. The ZR button is how you use your spells (the one that you chose from). The ZL button is your biggest super move and can only be used if your meter is full. Lastly the L button is a spell attack that uses a different meter and is also based on the spell you chose at the beginning of the fight.

The game is a one-button fighter in the same way Super Smash Bros is. There are no rolling inputs like Street Fighter, instead, the game controls with presses such as neutral B or forward B or up B or down B and the same thing with all the other buttons. I’m glad this game is easy to button mash but this game really made questionable design choices due to the lack of a proper tutorial and training mode. This game is designed like the story and it expects you to know things coming into this game. I, for one, feel like recent fighting games, such as Mortal Kombat 11, have made great tutorials a standard for fighting games and this is a step backward.

The last thing that needs mentioning is that I played this game after it was officially out on Nintendo Switch, so I decided to go online and it turns out there is no online community for this game since I found zero matches during my time with the game.

Touhou Hyouibana ～ Antinomy of Common Flowers is a fighting game that is so bare-bones that I don’t think it justifies the cost, maybe if it goes on sale for $10 then I might give it the nod. The game’s story is not easily understood by newcomers nor is it particularly engaging to read dialogue boxes in fighting games. The game doesn’t seem to care if you finish the story since it rolls credits after two chapters. The game doesn’t teach you about its mechanics or how to play as any character. The game is bolstered by its art style and soundtrack but that’s not at the top of the list when it comes to making a fighting game and those things should be considered the cherry on top and not the reason to buy into a fighting game.

All said, Touhou Hyouibana ～ Antinomy of Common Flowers is NOT a broken, glitchy, awful mess of a game so it doesn’t warrant anything less than a 5 out of 10. So with that said, I’m not inclined to give this game anything more than that, this game does very little to entice people into its world and mechanics. If you are big into fighting games then maybe there is something to get from this game, I would just recommend you have a buddy to play this game with IRL because you likely won’t find someone online. 5/10.

Touhou Hyouibana ～ Antinomy of Common Flowers is out now on Nintendo Switch (digital only) and is priced at $34.99. A review code was provided by the publisher for purposes of review.

If you love games with anime-looking art styles then check out our reviews of ALTDEUS: Beyond Chronos and Genshin Impact