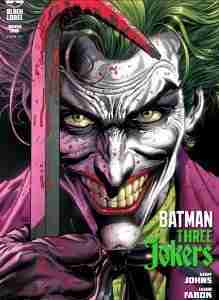 DC Comics long-awaited “Batman: Three Jokers” story came out, and it was worth the wait. The first issue delivered! Geoff Johns gives us the story we have been clamoring for since the end of the story arc Darkseid War and the beginning of DC Rebirth. To provide a brief backstory, while Batman was in the Mobius chair, he asks, “What is the Joker’s real name?” As readers, we did get the answer just Batman saying, “No. That’s Impossible,” and it isn’t brought back up until the end when Hal Jordan and Batman are talking in the Batcave, and on the bat computer, three different faces of the Joker are displayed. Geoff Johns is telling an excellent story so far in this first issue. Plenty of callbacks to past stories that are in the Batman mythos.

The issue starts with batman arriving at thee Batcave injured, and Alfred begins to stitch up his wounds. We get to see the different scars and cuts on Batman’s body. Each scar and cut come from a different member of Batman’s Rogue Gallery. We see the scar on his back from Bane broke his back, scratches on his chest from Catwoman, a burn from Riddlers cane, and multiple wounds from The Joker. 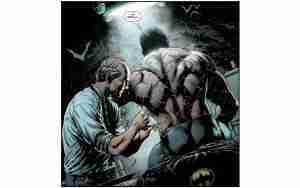 While he is getting stitched up, Batman starts to reminisce about the night Joe Chill shots his parents as he overhears that one of the last remaining members of a crime family has been found dead, and it’s likely that The Joker killed him. Barbara Gordon is working out on the treadmill when she hears about a comedian who had been killed by The Joker. After Barbara burns out the treadmill, she goes to take a shower, and the bullet wound from when she was shot and paralyzed during “The Killing Joke” story can be seen. Then, Jason Todd is beating up some goons in a graveyard. One of the goons is able to knock off Jason’s mask, and there is a scar on the back of Jason’s head from when he was beaten with a crowbar in “A Death in the Family” by The Joker. Batman, Barbara, and Jason link up and begin investigating The Jokers’ escape and his plan. Finally, we are shown The Three Jokers. Each of The Jokers has a connection to the three heroes. Batman and Joker have their storied past but including Jason and Barbara in the story to work alongside Batman to solve the mystery of the three jokers is dope! Each Joker represents a different time in the Batman mythos. The first Joker we see has a Hawaiian shirt and is from “The Killing Joke.” The next Joker is the boss and is drawn to be older than the other two and represents the first appearance of Joker in Batman #1, and the last Joker we see is the modern age Joker. 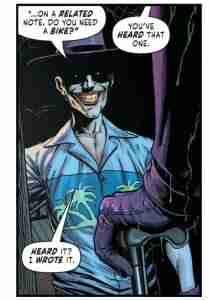 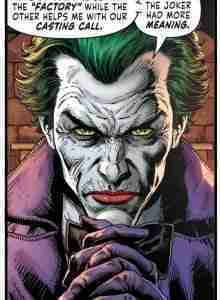 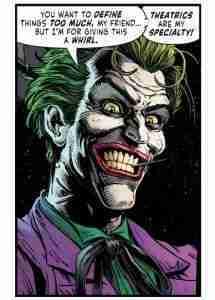 The rest of the story continues as the trio catch up to Joker’s henchmen at an aquarium. Joker toxin is in the water, and the fish have these huge smiles on their faces. A great call back to an old character is the story. Gaggy, who Joker called his “court jester,” is leading this crew of henchmen. Gaggy doesn’t stick around long and gets eaten by a shark. Let me tell you about this ending because WOW! Without giving any spoilers to the end of the first issue, it ends with a BANG!

After the first issue, I can honestly say I am glad that Geoff Johns and DC Comics delayed this story. With this story being under DC Comic’s Black Label, they can tell a more adult-oriented story. The second issue will come out later this month, and I can not wait. The artwork done by Jason Fabok and color artist Brad Anderson is phenomenal. I purchased it digitally and bought a hard copy—checkout DC comics websitehttps://www.dccomics.com/for more information.