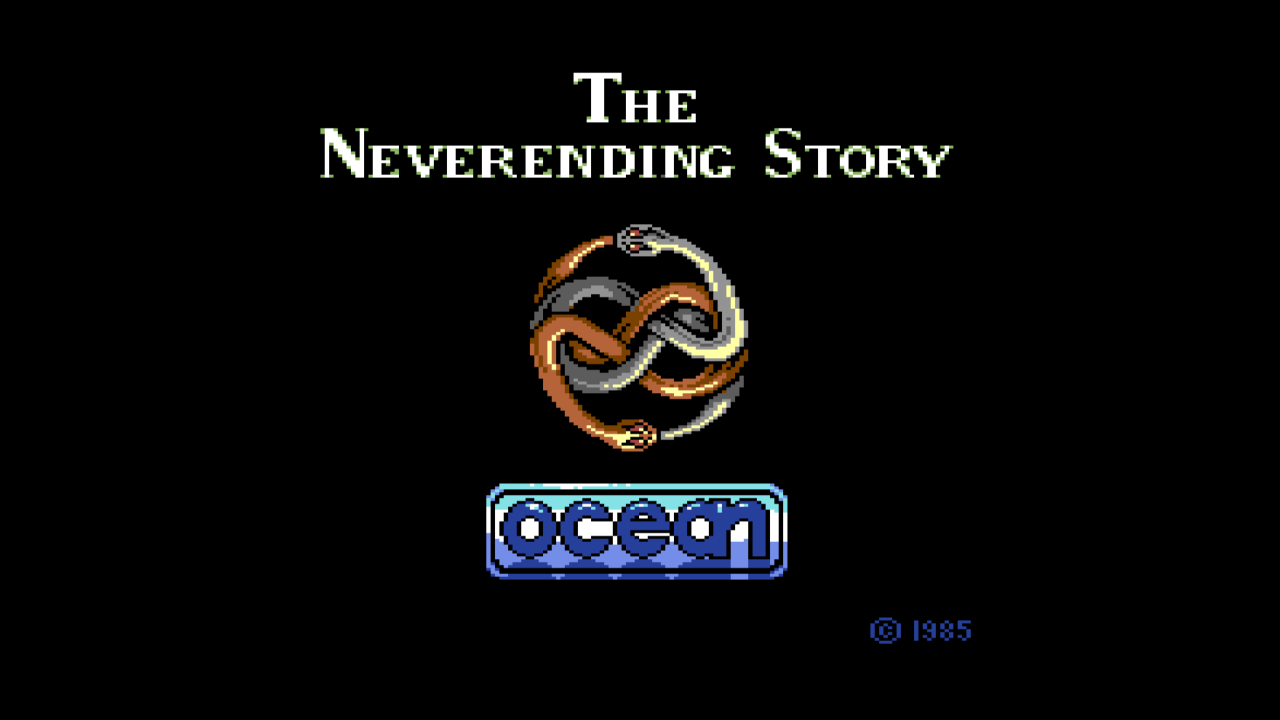 I’ve done it yet again. Another movie tie-in game, but this is from an era long gone before movie tie-in games weren’t just poorly made cash grabs. This 1985 Commodore 64 game is based on the 1984 English language german fantasy movie. As well as a 1979 book that also bears the same name The Neverending Story. This was one of my favorite movies as a young one. Although it did scare me at some points and to be honest I haven’t watched it in years. I feel like watching it now would just destroy that sacred rose-tinted bubble I have of it in my mind. Kind of like the dark crystal and other fantasy movies of the past, some things are just best left in the past. My favorite scene from The NeverEnding Story will always be the Sphinxes’ trials although scary and tension-filled as a kid. This was an awesome and defining moment in the story.

Since this Commodore 64 game is classified as abandonware and mostly forgotten there really isn’t too much out there about the game, also being 35 years old doesn’t help when researching it. However, I did manage to find some. This classic title The Neverending Story for the Commodore 64, Amstrad CPC, Apple II, Atari 8-bit family, and the ZX Spectrum was released back in 1985. It was published by the legends Ocean Software and Data soft and developed by Ian Weathburn and his small team. Additionally, It’s a text-based adventure fantasy game not something uncommon in that era. In all my looking I have only been able to find the 2nd game for sale, not this one. 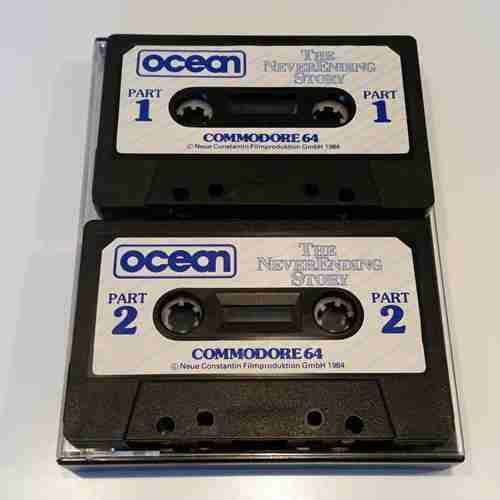 The NeverEnding Story can be beaten in 15 mins give or take on the Commodore 64 pending you know what you’re doing. It took me 40 mins, I died at the sphinx part just like that poor knight from the movie. I also managed to get lost in a few spots. Causing me to have to backtrack or completely restart. I did use a walkthrough, and for old games like this most times, I will. Most old text-based games, really just older games in general use very specific wording on what you can type. I don’t know if I would have been able to get through the game without a walkthrough, to be honest.

If you do wish to play this game for yourself grab an emulator like VICE. You can also find sites like C64.com to get the file for this. They are dedicated to storing and preserving the history of the Commodore computer system and making sure it’s games and programs don’t get lost to time. You can also use the Internet Archive which allows you to play the games in-browser if setting up an emulator is a little too daunting. The Commodore is a fascinating computer system with a lot of history that  I’m slowly learning about. 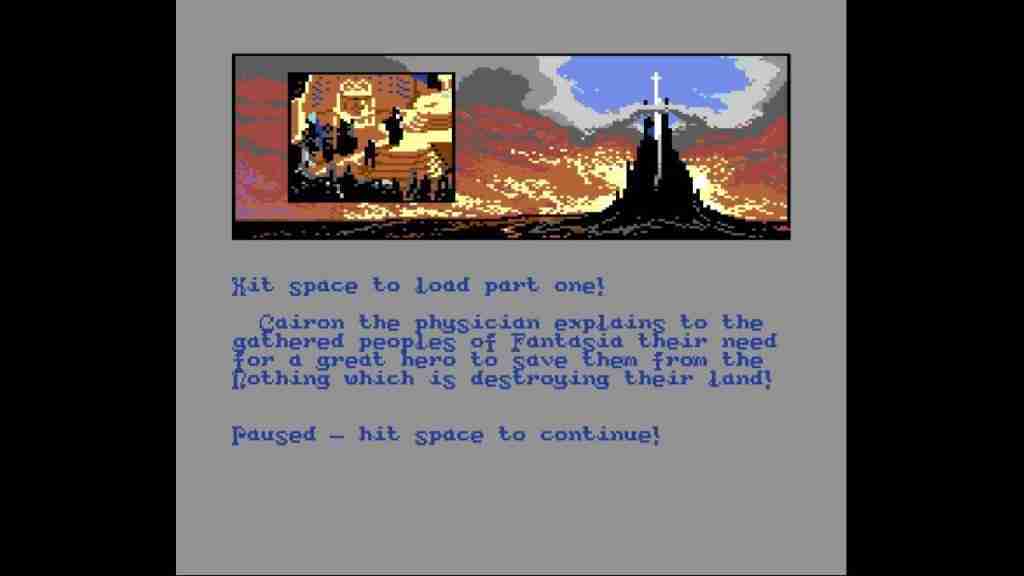 Like I stated this classic C64 title is based on the 1984 movie of the same name. Additionally, follows the story more or less with liberties here and there for gameplay’s sake. One major change is the lack of Bastian. If you don’t know Bastian in the movie is the boy who reads the Neverending Storybook in the movie. He serves a the narrator, protagonist alongside Atreyu, and savior of Fantasia. In this game, you play as Atreyu who must set out to find your savior and stop the nothing from swallowing all of Fantasia. Very similar to the movie plot, I’m not sure about the book plot though as I’ve never read it.

I won’t go into the story too much here as well it’s a 34-year-old movie. Additionally, it’s an incredibly straight forward the old “I have to save my world from ending” plot. At some point, you must have heard or watched the movie as well if you’ve read this far into the Retrospective. The game is divided into 3 parts, the first being the longest that has the most story and world-building. The second has the most interaction and moving around in Fantasia and the last part contains a frustrating maze in it. It’s also the shortest part if you have a walkthrough otherwise good luck getting through that maze everything looks the same. 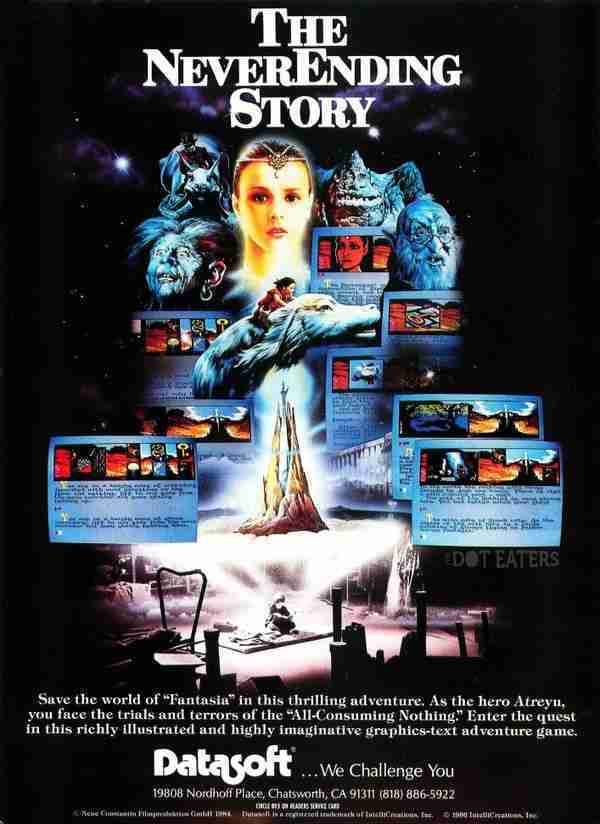 There was only the opening theme song in the beginning but no other sound through the rest of the 40 mins that I played. I can’t say if the other versions on the Amstrad CPC, Apple II, Atari 8-bit family, and the ZX Spectrum have sound but the C64 version did. The opening song was arranged but Martin Galway according to the limited resources out there. Just like the movie theme it burns into your brain and is actually really enjoyable in that classic MIDI game music way. You can find sites like Video Game Music Preservation Foundation that store and preserve not only the song from this game but a whole bunch of others as well if you want to give it a listen.

I’ll be honest there’s not much to look at here. It has images on the top of the screen to display where you are, your inventory which has a max capacity of 5 items, and below that is the text and typing area. As you go through your adventure the images will change and there’s a fair amount of art here. You can see the time and effort that went into making sure this game ran well and had nice visuals for 1985. Unfortunately, you almost can’t tell what is going on half the time. Not saying that it”s ugly. It’s just very dated. I feel a lot of older games relied more on imagination then putting visuals in your face like we have today.

According to an Italian wiki page, there are only about 40 words programmed into the game for control which is fair and more than I thought it would have. It is an old game and that is also why I used a walkthrough I didn’t want to fight through just trying to figure out what to type.

There is an in-game timer if you take to long reading or doing whatever without prompting the game to pause it will start a waiting pattern and take time off. If to much time is lost Atreyu will die being consumed by g’mork and all of Fantasia will be consumed by the nothing. Something I didn’t realize at the time. Yes before you ask I know this because I died that way. There’s really not much to this game it’s an old text-based movie tie in adventure game from an era long gone. The NeverEnding Story Commodore 64 is a quick play and a dip into gaming history and something I would love to get my hands on for collection’s sake. 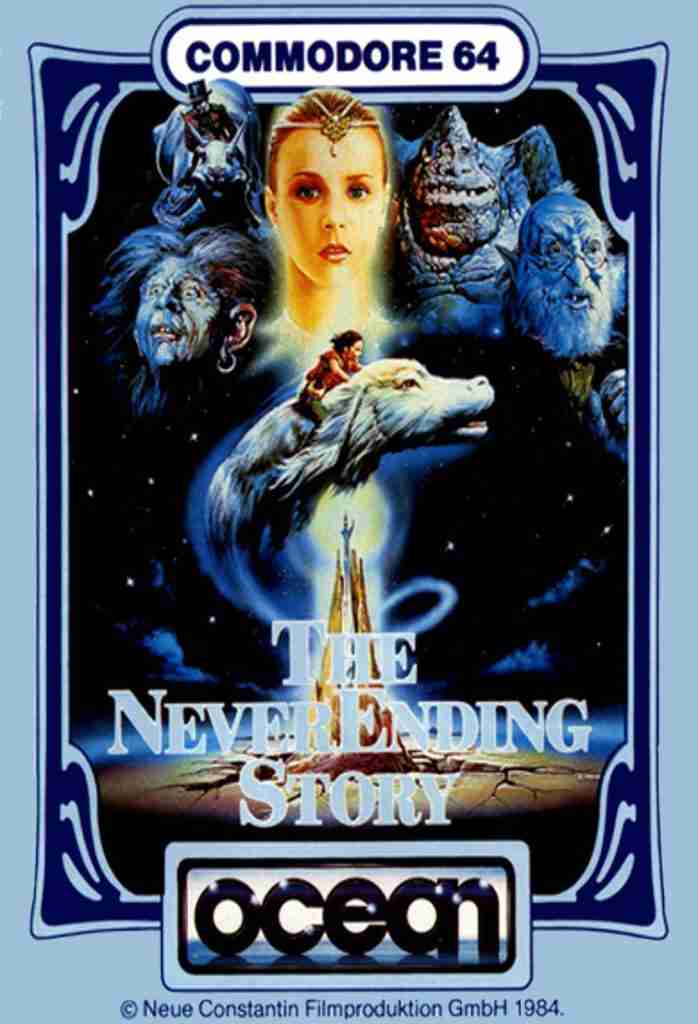