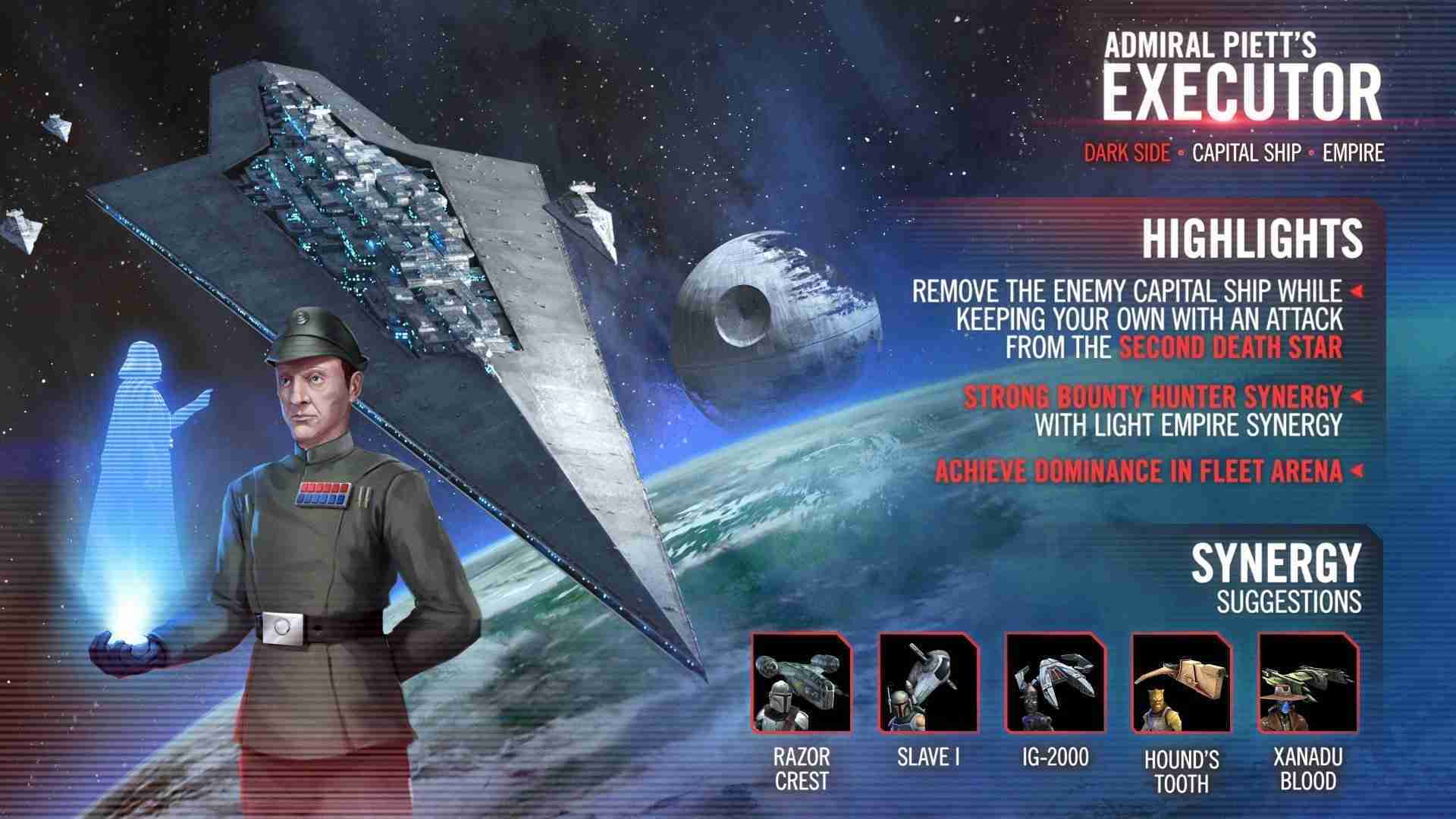 The Executor sets a new Ship meta. Since the day it was announced, the developers have been making their intentions clear. This new ship and its accompanying fleet are to be the most powerful in the game.

The Executor, captained by Admiral Piett, is an Executor-class Star Dreadnought. Massive ships were built to withstand any attack and defeat entire fleets on their own. In-game, the ship is so long that only the bow is visible and is escorted by smaller Star Destroyers. This new capital ship, instead of utilizing the mighty Imperial fleet, uses the services of the Bounty Hunters. The reasoning behind this being that the Bounty Hunters didn’t have a capital ship of their own just yet. This is support in-universe by the scene in Empire Strikes Back when Darth Vader hires the hunters to find the Falcon. However, an oversight by the developers is that all of the abilities are taken from Return of the Jedi. At the battle of Endor, there wasn’t a single bounty hunter ship present.

In terms of power, The Executor can’t be matched. It has abilities that aid Bounty Hunters via healing, mass assists, and more. Its ultimate utilizes the second Death Star itself to completely atomize the enemy capital ship. If the battle persists long enough, its second shot will wipe out any remaining enemy starfighters. Testing has shown that this is as overpowered as it sounds. The Resistance fleet, taken from The Last Jedi, has a similar ultimate ability. Except the difference is that their ship is also destroyed in the process.

Despite this, the community has found several ways to beat The Executor while on defense. The previous fleets that shared the previous meta, the Galactic Republic and Separatists, are both able to secure a win. However, the developers don’t seem too keen on allowing this to happen as they’ve come out and stated the Executor may receive buffs. This has rightly been met with resistance since at the moment it’s balanced which is what any fleet should be. How they failed to see this coming before release simply is beyond belief. No brand new ship or character should be receiving any sort of buff the day after they’re released to make them overpowered by design. This sets aside the steep requirements to unlock this ship and the fact it’ll take players over a year to unlock free-to-play.