Rooting for the bad guy: A Look Back at Hotline Miami 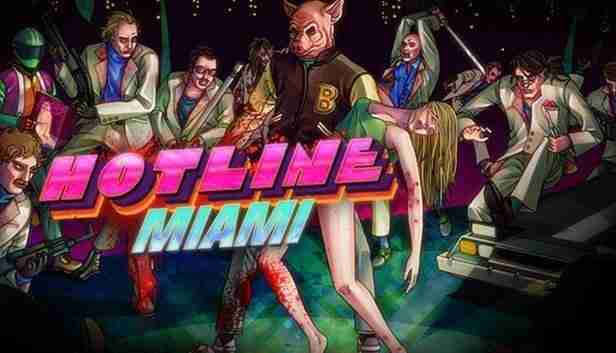 Hotline Miami, if your not familiar, is a top-down shooter reminiscent of an 8 bit NES game of old. The vibrant neon colors and heavy synth-pop music really paint the setting of 1980’s Miami. This innocent-looking homage to an era of excess masks one of the most brutal, unforgiving, twisted, and over-the-top violent games I’ve ever played. This game has been an industry force since it launched back in 2012, and became synonymous with indie games making a dent in the mainstream market with its no holds barred adult content and great gameplay.  Here I’ll discuss the infatuation and frustration that makes this fast-paced gorefest, an addictive and memorable experience worth playing

Independent films have a reputation for taking risks, and not shying away from violence to make an impact. The same can be said for independent games, but none have taken it to a level like Dennaton games and their 80’s fueled blood opus: Hotline Miami. The name and setting were inspired by the documentary Cocaine Cowboys which covered the drug cartels that ran through Miami in the 1980s.

The game designers had a prototype that just needed a facelift and change in atmosphere. Not since “GTA Vice City“ has Miami in the 80’s been so vividly represented. Gameplay was first and foremost in the design process, twitch shooting and fast re-spawns kept me going back, but the intense frustration never let me put it down. Feeling inadequate, helpless, and just plain pissed was part of the magic. Complex Magazine just released a short documentary that is worth watching to get the full background on the game’s design and creation.

It is no surprise that I LOVE this game series, regardless of the unassuming retro look, all dark imagery leaves a lot to the imagination.  Brilliant in its choice to use the 8-bit engine to trigger a comfort of childhood gaming, to then have it get its teeth kicked in with this snuff film of a game. “Surprise! This game will mess with you”. Should have been a box quote because it truly twists your understanding of a genre in gaming.

One turn after another the storyline keeps you moving to the next hit. You get phone calls prior to every chapter assigning you a new target. The cryptic language speaks of “babysitting” a house full of noisy “kids” and that I should bring all the “Toys” to help them go to “Sleep”. This adds to the intrigue of your own crime movie.

Jacket, the main character is left to assimilate into the bloody errand boy. You select different animal masks that personify the scary almost slasher film feel.

Death is inevitable and is a staple of this game’s harsh difficulty curve which screams “GET BETER OR DIE!”.  This will turn off most casual gamers but I tell you, there is nothing greater than getting in the zone. Smashing through the level, kicking doors in, and finishing your rampage as the neon letters say. “ Level Clear”

I let out a sigh of relief, I quickly make my way to the next checkpoint. My head on a swivel, I keep moving before something happens to where I might have to re-live the torture. Leaving the difficulty behind, the art direction and nods to 80’s pop culture allow for a bit of film nostalgia ala Scarface or Miami Vice.

Let me tell you about the soundtrack, man the soundtrack is insane!  The game Begs for you to play with headphones on. The music makes you want to commit a crime ( I’m kidding, I think?). You feel like a badass with the music blaring as you shoot up a dance club to the bass-thumping synth-pop.

A lot of people will play this game with the idea of just attaining a high score. Some will play for the curiosity of the violent nature. There is a convoluted and very confusing story. One that you won’t be able to piece together unless you are willing to make it through the horrors of Miami. I’ll reiterate how much I love this game, but once was enough.

This game allows for quick bursts of action, instant respawns that keep the action moving. The ability to try and get a higher grade and beat your own score is a nice option for those of us that wanna keep coming back. You never felt so good doing such horrid things, but that’s part of the draw that keeps you coming back, to root for the bad guy.

This game reminds you that you haven’t seen it all yet. Dennaton is a punk rock developer whose first showing has now made the indie game scene step up their game. Hotline Miami came out of nowhere to impress the gaming industry and gamers alike. There are short films, fan art, and comics dedicated to the series, its characters, and the mysterious lore.

The franchise will forever be remembered for its innovation. Games of this matter typically are credited to developers like Rockstar, not giving a fuck and designing a game that they want to play. Artists like these need to have a space to do what they want. I’m glad to be a supporter of such art that knows there is a market beyond the mainstream. I tell you, PLAY THIS GAME! You can’t ignore what a phenomenal experience this is. Rock stars have the mainstream, but punk rock has the underground. If you ask me? I’ve always been more punk.

If your up for a ride that you won’t soon forget, pick this up it’s cheap and worth every penny. When a band has a great first showing a follow-up is always expected.  “Hotline Miami 2: Wrong number” is next in the series,  stay tuned. That’s another story for another day.

Start with the debut and if you dig the vibe you’ll love the B sides.

Be sure to keep checking daily for more articles on music, games, and pop culture from the staff at Lv1gaming.com Follow me @strayrelay for my thoughts on Magic the Gathering, obscure Anime fighting games, and the occasional Spotify playlist.