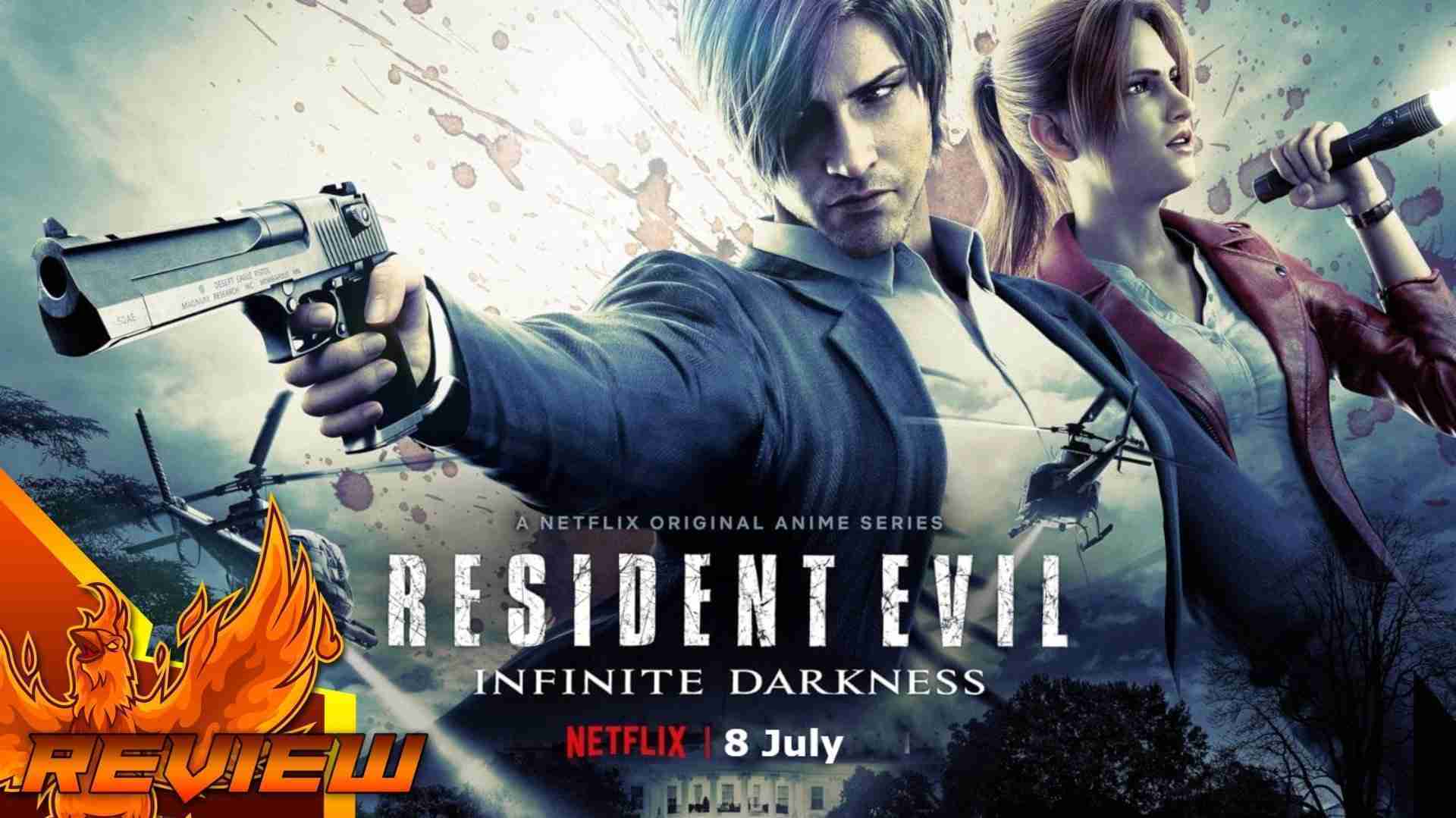 Resident Evil has always been a popular franchise, synonymous with horror. And recently due to the remakes and the new series (Biohazard and Village) it has had a resurgence in popularity. With dozens of games, live-action adaptions, and animated movies, its story can get a little crazy. But the new series on Netflix, Resident Evil Infinite Darkness, is aiming to add a little extra to the world. Announced back in March during Capcoms’ Resident Evil Village event, Infinite Darkness was teased then.

The Netflix series makes for a nice addition to the lore; while being an enjoyable self-contained story with new and returning characters. Is it able to live up to the exceptions that fans have of Resident Evil or does it drop dead? Here’s my review of the Resident Evil Infinite Darkness series.

The story revolves around Leon and “supposedly” Claire, as they uncover the secret history of a zombie outbreak in the country Penamstan. It starts with a cyber-attack on a White House server holding Pentagon secrets. This is what draws Leon and three other special agents (Jason, Shen May, and Patrick) to the White House. While there, a zombie outbreak happens, leading the agents to sweep the White House for survivors.

After the zombie outbreak within the White House, Defense Secretary Wilson wants to blame the Chinese government for the attack. He starts advising/pushing the President into taking a hard stance against them, leaving Leon in a race against the clock.

Meanwhile, Claire, who is working for TerraSave, is on a humanitarian aid mission helping survivors in Penamstan. She begins talking to a boy, who shows her his artbook, which depicts a zombie outbreak. Being reminded of her own experience back in Racoon City. Afterward she travels to the White House, due to an interview scheduled with Press Secretary Spacer. But being brushed off unaware he died in the attack on the White House. This is where Claire and Leon meet up once more.

Claire shows Leon the drawing the boy gave her depicting the civil war. Likening it back to raccoon city, Leon starts to question things. However, he advises Claire it’s nothing before going their separate ways once again. With Leon heading out on his top-secret mission and Claire going search for more answers.

As the story progresses we find out Jason and Shen May’s history with the Military and Wilson specifically; revealing they were part of units that were involved with testing B.O.W.s and then eradicated to hide the evidence. As well as, Jason himself being a B.O.W. that has been using suppressors to maintain his human form.

Leon soon uncovers the truth of Jason and his motivation for spreading terror. Claire discovers Wilson was behind the B.O.W. program for-profit and the attack on both Penamstan and the White House. Wilson had been using suppressors in order to try to build an army. He was using it for any enemy of the U.S. and tries to convince Claire to join him.

In the end, Leon gets a message to Patrick who is able to talk to the President and stop the original speech aimed at China. Instead, focusing on giving a speech of hope and re-establishing aid with Panamstan. After a fight with Jason, who stopped taking the suppressor and allowed himself to fully transform, Leon fully understands Jason’s plan of creating terror and refuses to allow it. Afterward, Leon and Claire meet up again, with Claire asking for the evidence of Wilson’s program to give to the press. Leon thinks about what Jason wanted and realizes this would fall into his plans and refuses. Claire and Leon then separate on tense terms.

The story is well thought out and adds nicely to the RE Universe, but it felt more akin to one of the animated Movies than a Series it was touted to be. Nevertheless, I do love any more action of Leon and Claire, even if one got more screen time than the other.

Leon S. Kennedy – acts as the President’s special agent, undergoes a secret mission in China, and uncovers one-half of the Penamstan conspiracy.

Claire Redfield – TerraSave volunteer working in Penamstan, uncovers the other half of the Penamstan conspiracy, being captured by Wilson and almost made into a B.O.W.

Jason – Hero of Penamstan, was part of the Mad Dogs unit, infected with the test virus while rescuing another unit. Takes suppressors from Wilson in return, acts as Wilson’s private force. Wants revenge against Wilson and to spread terror.

Shen May – was a communications specialist in the Military, overheard a conversation about the virus, and joined Jason’s unit when she heard them talk about her brother. Found out her brother had turned and given Jason and his unit the rest of his suppressors. Not knowing all of Jason’s plans, she joined him in trying to bring down Wilson.

Patrick – Newest agent out of the four, he stays behind to guard the President. Later on receives a call from Leon, who was thought dead, and passes a message along to the President for him, stopping the President from calling out China.

Wilson – Defense Secretary, he’s the one behind the attacks on Penamstan and the White House. Wants to build B.O.W.s to fight any enemies of the U.S. Pushes the President into almost declaring war with China.

Graham – The President of the U.S. is caught with a difficult decision of discovering the truth of the cyber-attack on the White House, while preparations are made for the peace ceremony with Penamstan and being pushed to declare China an enemy.

Ryan – Presidential Aid, the voice of reason, tries to discourage the President from declaring China an enemy before the investigation is completed.

This holds nothing back, with its sound design from the groans and cries of the zombies to every gunshot, everything sounds on point. Even in tense silent moments, it feels and looks spectacular. The looks of the characters are greatly improved from the previous animated movies, looking closer to life-like representations of the characters. Infinite Darkness shows a drastic improvement to visual quality from the lighting sources of fires, flashlights, and even the acid. It was hard to not be captivated by the sheer visuals of the mini-series.

Not to mention that the sound quality is very good. From the quality of the voice acting to the moans of the dead, and the sound of gunfire everything about the feel of this series is truly amazing. I was truly loving every moment and detail thanks to the sheer level of quality of the mini-series.

Leon and Claire are two of my favorite characters hands down, so I was super excited to see them back in action via Netflix’s show. However, to me, Claire didn’t get anywhere enough screen time to satisfy me, it felt like she was just there to move the plot along; Or to give us (the audience) a look into the back story of what was going on.

Despite Netflix calling it a series, the show itself felt more like one of the other animated movies or, at most, a mini-series, not the full-blown series that it was hyped up to be. However, if rumors are true, there will be a second season, that will add to this. Hopefully, going forward we’ll see more from this series or another separate Resident Evil story. My hopes, however, are in expanding this series, as I feel there is much more to be explained, especially with Wilson surviving and the introduction of Tricell much earlier in the universe.

While I loved a lot of what this series had to offer, overall it felt way too short for me. And while I absolutely enjoyed what was added I felt there could have been much more to show. But Resident Evil Infinite Darkness is still a really good watch, especially for fans of the franchise.

Make sure you guys check out my previous review on Zach Snyder’s zombie heist film, Army of Darkness.