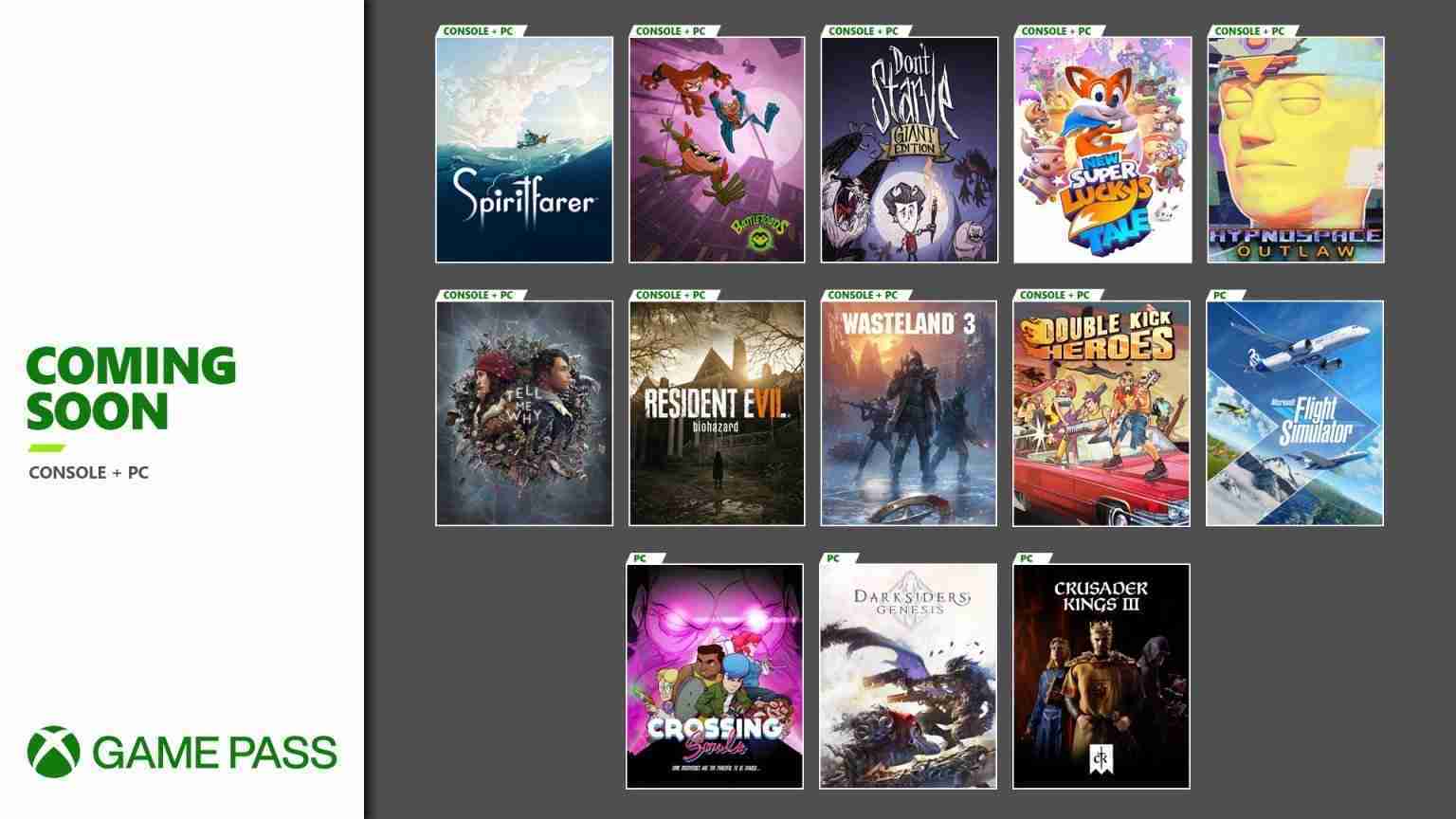 Each month Xbox Game Pass subscribers are introduced to news games. Thanks to Xbox Wire we now know what is coming for this rest of this month of August and a few titles for September. Check out the list below.

Microsoft Flight Simulator (PC) – Available Today!
From Xbox Game Studios, available with Xbox Game Pass (PC or Ultimate) on day one! From light planes to wide-body jets, fly highly detailed and accurate aircraft in the next generation of Microsoft Flight Simulator. Test your piloting skills against the challenges of real-time atmospheric simulation and live weather in a dynamic and living world. The world is at your fingertips.

Spiritfarer (Console & PC) ID@Xbox – Available Today!
Learn how to say goodbye in this cozy management game about dying. Playing as Stella the spiritfarer, build a boat to explore an imaginative world in search of spirits seeking passage to the afterlife. Befriend and care for your passengers as you farm, mine, fish, harvest, cook, and craft your way across mystical seas on your hand-crafted ferry. Run, jump, zip, and glide your way through elegantly constructed platforming levels. Bring along a friend to join the fun as Daffodil the Cat, in optional two player local co-op. Spend relaxing quality time with your spirit passengers, create lasting memories, and, ultimately, learn how to say goodbye to your cherished spirit friends.

Battletoads (Console & PC) – August 20
From Xbox Game Studios, available with Xbox Game Pass on day one! The wait is over! Rash, Zitz, and Pimple are returning at last to smash-hit their way through an all-new action-packed adventure of choreographed chaos, and couch co-op may never be the same again. 1-3 players will take control of the Battletoads and team up to storm through wild and unpredictable stages with only one rule – expect the unexpected. Teamwork makes the dream work in a drop-in, drop-out gameplay blast, filled with over-the-top gameplay moments that anyone can enjoy, but only a True ‘Toad’ can master. Pre-install now, so you’re ready to play when it drops!

Crossing Souls (PC) ID@Xbox – August 20
It’s 1986 in California, and a group of friends will live the summer of their lives after a mysterious discovery in the woods outside their quiet town. By uncovering an artifact whose powers they don’t fully understand, these remarkable kids will defy the laws of nature and somehow interact between two planes of reality: life and death. Their curiosity will trigger a series of unexpected events that will get them involved in a government conspiracy and a mysterious U.S. Army general with his own nefarious plans.

Darksiders: Genesis (PC) – August 20
Darksiders: Genesis is an action/adventure game that tears its way through hordes of demons, angels, and everything in-between on its way to Hell and back with guns blazing and swords swinging. Genesis gives players their first look at the world of Darksiders before the events of the original game. Furthermore, it introduces the fourth and last horseman Strife, as well as Co-op gameplay for the first time in the history of the franchise.

New Super Lucky’s Tale (Console & PC) – August 21
Join Lucky on his thrilling journey through the Book of Ages, a magical artifact that opens doors to amazing worlds. Meet new friends, explore exciting lands, and recover the missing pages from the evil sorcerer Jinx and his villainous family, the dreaded Kitty Litter. A complete re-imagining of the original Super Lucky’s Tale, with new content, an improved story, and major overhauls to the camera and player controls, New Super Lucky’s Tale is the definitive Lucky experience and a love letter to classic 3D platformers!

Hypnospace Outlaw (Console & PC) ID@Xbox – August 27
Hypnospace Outlaw is a ’90s internet simulator in which you scour Hypnospace’s wide variety of weird and wonderful websites to hunt down wrongdoers, while also keeping an eye on your inbox, avoiding viruses and adware, and downloading a plethora of apps that may or may not be useful. In your spare time, you can customize your HypnOS desktop however you see fit, with a variety of downloads, wallpapers, screen savers and helper bots to keep you company.

Tell Me Why: Chapter 1 (Console & PC) – August 27
From Xbox Game Studios, available with Xbox Game Pass on day one!  Tell Me Why is the latest narrative adventure game from DONTNOD Entertainment, the studio behind the beloved franchise, Life is Strange. In this intimate mystery, twins Tyler and Alyson Ronan use their supernatural bond to unravel the memories of their loving but troubled childhood in beautiful small-town Alaska. Pre-install now, so you’re ready to play the moment Chapter 1 is available!

Double Kick Heroes (Console & PC) ID@Xbox – August 28
Double Kick Heroes mixes a shoot’em up with a rhythm game! In story mode, you must survive on the highway to hell by killing monsters with your gundillac! Struggle through the 30 levels of total madness and escape from this nightmare! Only the power of Metal can save your band! In arcade mode, jump right into the action and play your favorite tracks from the game. Features – Double Kick zombies in the face with insane Metal music!

Wasteland 3 (Console & PC) – August 28
From Xbox Game Studios, available with Xbox Game Pass on day one! Wasteland 3 is a squad-based RPG from inXile entertainment, featuring challenging tactical turn-based combat and a deep, reactive story full of twists, turns, and brutal ethical decisions that will keep you hooked whether you’re a Wasteland veteran or new to the series. Create a squad of up to six Rangers and customize them with perks and abilities geared to your playstyle. Pre-install now, so it’s ready to play when you are!

Crusader Kings III (PC) ID@Xbox – September 1
This grand strategy game puts you at the head of a noble house in a deeply researched medieval world. Use your armies, your diplomacy, and your wit to expand and elevate your dynasty. Each generation brings new characters and new challenges as pesky plotters, turbulent priests and ungrateful children challenge your efforts to keep your realm and your family in line. Pre-install now, so you’re ready when Sept comes.

Resident Evil 7 Biohazard (Console & PC) – September 3
Menace and desperation seethe through the rotting walls of an abandoned southern farmhouse. Resident Evil 7 biohazard marks a new beginning for survival horror with a shift to an immersive first-person perspective. Powered by the RE Engine, graphics reach new heights of incredible photorealism to further draw players into the disturbing game world.

Will Kratos Appear At The Next State of Play?