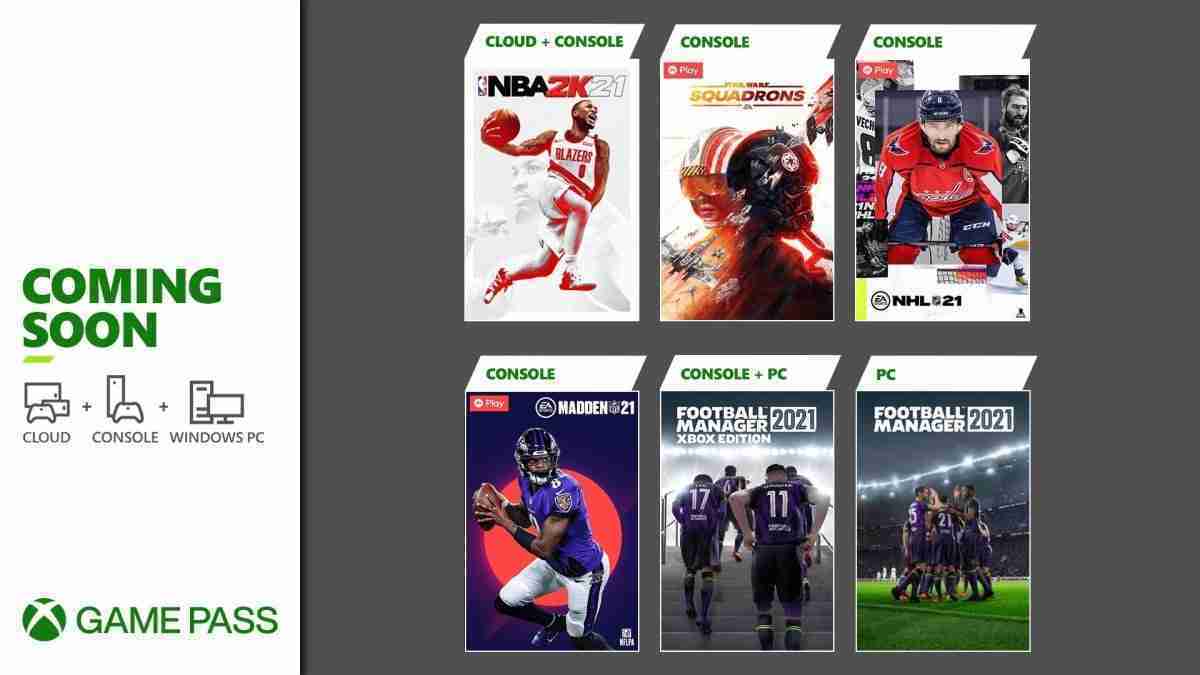 Each month gamers who are subscribed to Xbox Game Pass and Xbox Game Pass Ultimate are treated with a slate of new games. This month NBA 2k21 & some EA titles headlines the first batch of games. Chck out below what you can expect from March Xbox Game Pass titles. News via news.xbox.com.

Madden NFL 21 (Console) EA Play – Available now!
Xbox Game Pass Ultimate members can now go all out as Madden NFL 21 joins The Play List with EA Play. Packed with fresh new features and innovative gameplay enhancements, Madden NFL 21 delivers new levels of ingenuity and control developed to inspire creativity on and off the field. Active members can play as much as they want, whenever they want, plus score 3 Gold Team Fantasy MUT Packs every month!

Football Manager 2021 (PC) – March 4
Manage the club you love and compete for the biggest prizes in the game as you cement your legacy as one of the managerial greats. Dropped into a living and breathing footballing world, you’ll sign wonderkids and develop them to their full potential by crafting a tactical strategy designed to play to their strengths. With more than 2,000 clubs waiting for you to lead them to glory, where will you take your first step towards managerial greatness?

Football Manager 2021 Xbox Edition (Console and PC) – March 4
Experience the drama and excitement of the world’s most popular football management simulation as it returns to the biggest stage. Take in the spectacle of matchdays in the 3D match engine or use the “Instant Result” option to skip straight to the full-time whistle and speed up your progress through the season. Alternatively, go head-to-head against your mates for the ultimate bragging rights in one of several online modes.

NBA 2K21 (Cloud and Console) – March 4
NBA 2K21 continues to push the boundaries as the most authentic, realistic basketball video game experience. Enjoy best-in-class gameplay and one-of-a-kind immersion into all facets of NBA basketball and basketball culture. Ascend from high school to college ball on your way to the League in MyCareer, or build your greatest collection of the latest NBA stars and legendary ballers in MyTeam to compete against other ferocious collectors around the world. Jump in now and find out why in NBA 2K21, everything is game.

Star Wars: Squadrons (Console) EA Play – Coming in March
Master the art of starfighter combat in the authentic piloting experience Star Wars: Squadrons. Feel the adrenaline of first-person multiplayer space dogfights alongside your squadron and buckle up in a thrilling Star Warsstory.

NHL 21 (Console) EA Play – Coming in April
Carve your path to superstardom in an expanded Be A Pro mode and go down as one of the league’s greatest. On the ice, change up your attack with all new moves, dekes, dangles and evasive maneuvers, inspired by the league’s most groundbreaking innovators.

Cricket 19 (PC) – Available now
The official game of the 2019 Ashes Championship is the complete cricket simulation. Featuring a suite of exciting, all-new features that add even greater depth and rich new content to Big Ant Studios’ acclaimed cricket engine. Tackle historical scenarios for classic matches through the ages, develop the career of a junior right through to national captaincy. Participate in the fully licensed Ashes Cricket mode or lead your nation to the greatest world championship in the classic 50-over one day mode.

Elite Dangerous (Cloud) – Available now
Take control of your own starship in a cutthroat galaxy. Elite Dangerous is the definitive massively multiplayer space epic, bringing gaming’s original open world adventure to the modern generation with a connected galaxy, evolving narrative and the entirety of the Milky Way re-created at its full galactic proportions.

Control DLC Sale – Available until March 8
Xbox Game Pass members can save 50% off The Foundation and AWE expansions or 35% off the Season Pass for Control until March 8, bringing new story content and side missions as well as weapons and mods.

Gears 5: Operations 6 DLC Bundle – Available now
Xbox Game Pass members can save 10% and gear up for Operation 6 with the new Gears 5 Operation 6 DLC bundle, which unlocks Hoffman, Queen Reyna, the Zealot, plus lots of extras. Honor the heroes of Gears in Operation 6 with these new characters, a fresh multiplayer map, renewed Tour of Duty and more!

March comes roaring in with 4X points rewarded for certain heroic (or villainous) Ultimate Quests! If you have never tried out Quests before, this is the month to dive in, and don’t forget to always claim your Rewards points after you complete your Quests.

The following games are leaving the Xbox Game Pass library on March 15, be sure to spend some time to tie up any loose ends before they leave! If you’re looking to keep going, you can use your membership discount to save 20% on games and 10% on DLC.