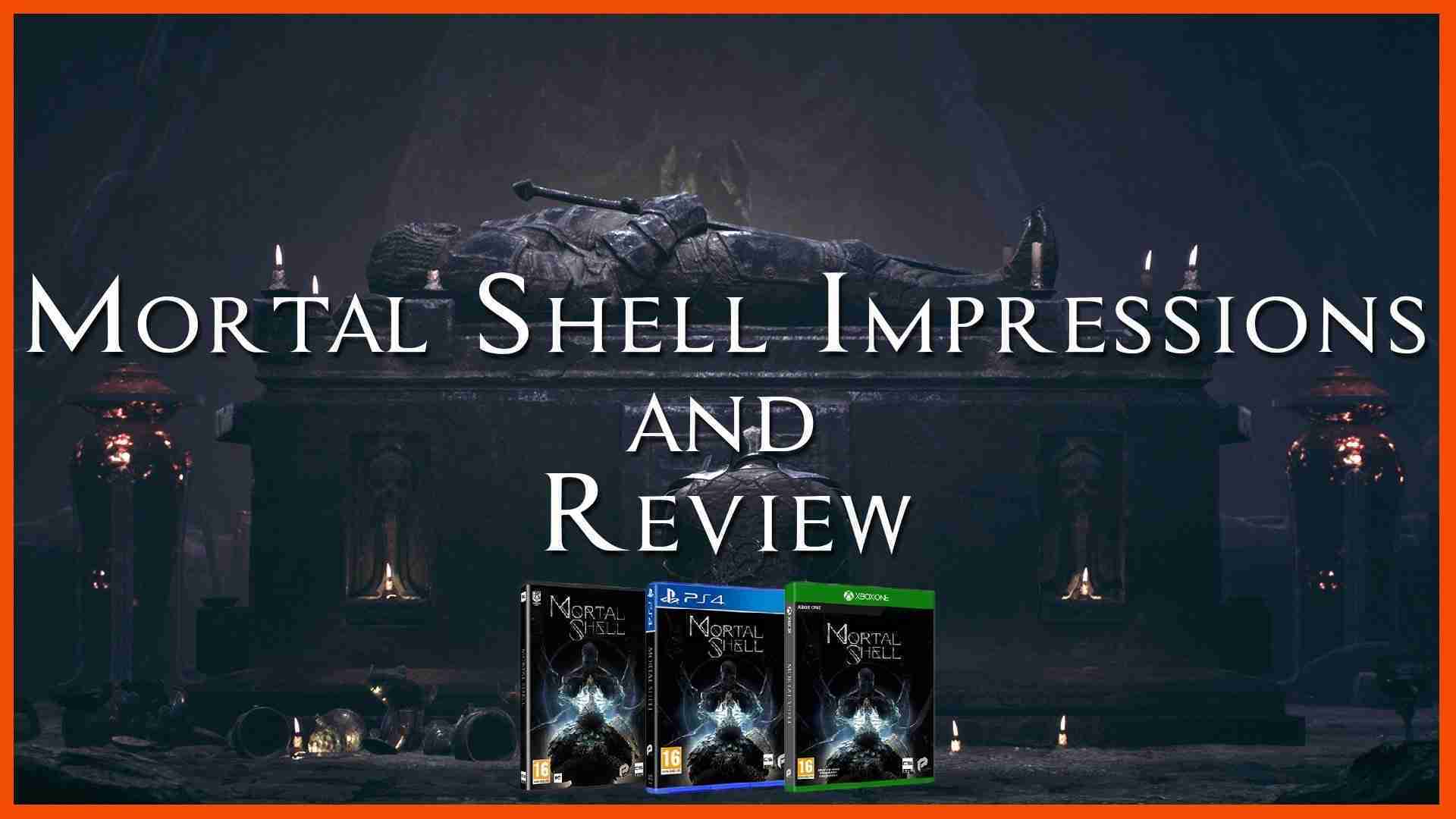 What is Mortal Shell? Firstly, Thanks to the handsome dreamcastGuy for giving Lv1 gaming.com and me the code to play and review this game! I am playing on the PC on the Epic store Build 08.08.02 Revision 9103. I like to state at the top of this piece, I had no major software issues. That may not be the case for everyone, though.

One of the first things that can be said is this game is stunning. Mortal Shell feels dark, yet blazingly bright. Hopeful yet depressingly dark. From the start in the dark, murky tutorial world to the fog cover swamps, your start in Mortal Shell sets a feeling and sticks with it. The music, ambient sounds, menus, and just the whole package is a world to get sucked into. The variety of enemy visual types is impressive even if when it comes down to it, they are the same attack wise. Everything is bold and feels like it’s part of the world.

I have to hand it to developer Cold Symmetry and publisher Playstack. They have something special here. Something we’ve seen time and time before but with enough unique twists to make it stand out. Cold Symmetry was founded in 2017 by a core team of four. The studio is composed of AAA veterans with a strong passion for making games. A core team of 4 worked on this game no doubt with the help of others but this was 4 people’s dream. Think about that.

A Perilous Journey Into the Unkown

As you could more than likely see, if you watched the video review, I’m not good at games like this. In fact, I suck at the timed combat, roll, dodge mechanics Mortal Shell has something different that made dying over and over worth it. My main focus in the time I had was to see as much as I could, explore while making a mental map, and just have a good time in a genre I rarely indulge in. I found 3 of the shells Harros, The Vassal, which is more than likely the first one most will encounter. I also found Solomon, The Scholar and Eredrim, The Venerable. Unfortunately, I found no weapons, and I didn’t have time to upgrade/ unlock any skills in the trees for my shells.

The Bodies or Shells of defeated warriors are out in the world for you to stumble across and discover. You get to inhabit these Mortal Shells and master each one’s unique combat style and stats. From Tanky boys to Fast low health boys. Shells can be swapped out at the safe areas or on the fly using effigies of the shells. Tar the game’s currency or souls if you already want to draw comparisons is used to learn the name of that shell. Which then with Tar and Glimpses allows you to start the skill unlock process.

There are safe areas at the start of most areas, at least the ones I got to explore. These almost Hub like areas allow you to Awaken and talk to Sester Genessa, Unlock Skills, Swap shells out, Use an almost flashback like sense to find other shells and weapons and use workbenches or anvils to upgrade those weapons. In some, you also have access to a merchant to buy various items for your punishing combat filled journey. 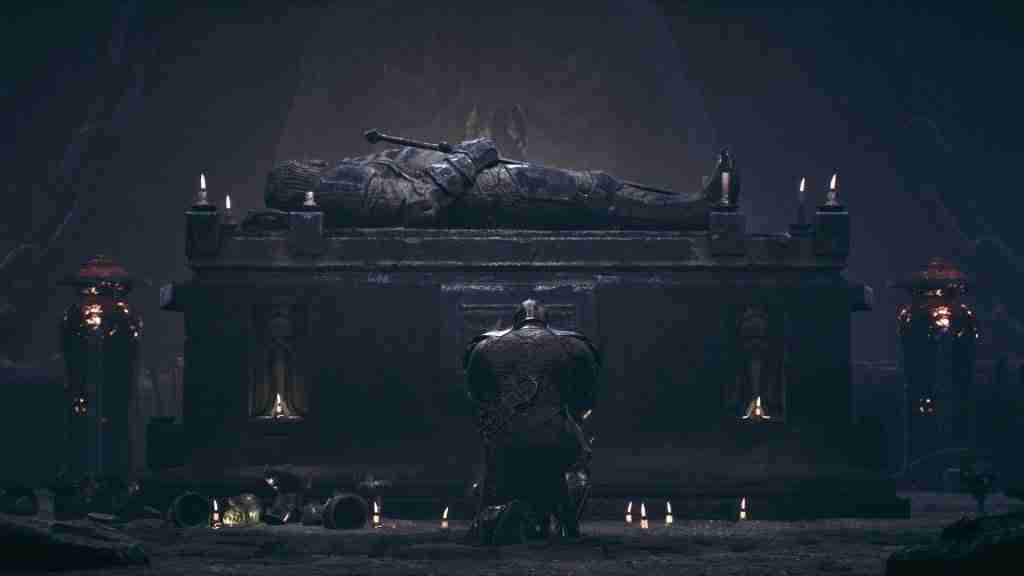 I Relish The Pain

Each and every swing is deliberate and will punish you if you get swing happy. Combat is brutal but not unfair. An encounter with the chained bird unlocks a timing specific parry and riposte that requires resolve and also serves as a quick heal. Your other means of defense is a stamina eating dodge and roll. Mortal Shell also brings something unique with it’s “harden” the ability to toughen your shell to withstand an attack because the game has no traditional block button.

You can harden mid-attack to give some defence in case you time an attack wrong even with its lengthy cooldown it is an extremely effective tool to have. A weird mechanic is items have familiarity which requires you to use them multiple times to raise that stat and get the most effectiveness. It often led to me having to deliberately poison myself or use an item that would have helped in a fight just to figure out what it was.

Brace yourself for another soulsborne reference here but Mortal Shell has a Sekiro like 2nd chance mechanic. When you deplete the health, you will get knocked out of the shell. It allows you to get back in with full health-giving you that 2nd chance to end that annoying enemy. Without your Shell, it’s a one-hit deal. Dying drops all your hard-earned Tar, and if you die before getting it back well…that’s it.

My one complaint in the hours of playing is there’s no jump. It’s a very small thing, but I found myself getting stuck in places that a small jump could have solved. In fact, that was a lot of my deaths getting stuck on a ramp or corner and getting boxed in by enemies but not being able to get away with rolling or dashing through them. I also did manage to get stuck after falling on a ledge that probably shouldn’t have been there. Also, I would say at least in my experience the lack of quick health options made things a bit hairy a few times. Unless you can build up resolve and land the parry and riposte for some quick health it very often feels like taking any hits is an utterly devastating prospect.

Resolve is something you build up as you damage enemies’ resolve can be used in your parry and riposte. Alternatively, if you build up 2 bars you get the option to use a devastating special attack that will either kill or severely drop the health bar of most enemies. Aggressive or safe, every playstyle has a place in Mortal Shell without feeling like you’re forced to choose one. One of my favourite things is the playable Lute you get. If you sit in front of Sester Genessa, she bobs her head. She acts as your brace yourself Doll in the Hunter’s nightmare or Shrine Keeper. But not really at the same time as Mortal Shell doesn’t have a traditional level-up system but a skill tree for each and every shell. But I feel like she has a more profound sinister role to play further into the game. 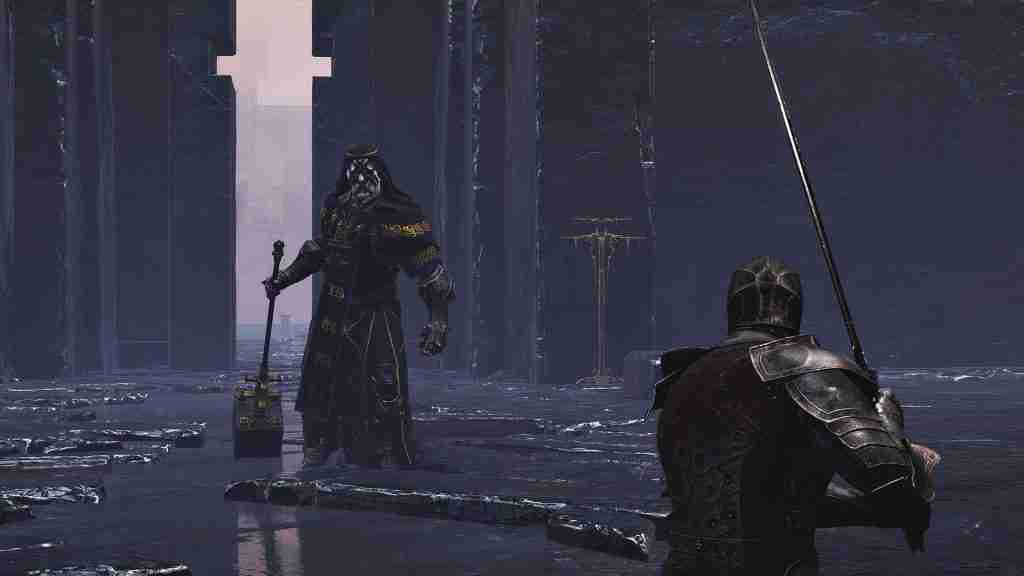 So What IS Mortal Shell?

It’s a deep, lore thick action-RPG that tests your sanity and resilience in a shattered world. Combat is strategic, deliberate, and unforgiving. The stronger your connection to each Mortal Shell grows by unlocking skills, the better you can harness their innate talents. You have the ability to recover unique powerful weapons, sharpen your iron with acid, and study devastating arcane powers. Your path is guarded by desperate foes, devoted to inscrutable gods. Behold creatures both pitiable and grotesque, but do not let fear halt your journey.

I know looking at everything that is almost impossible to not draw parallels to Soulsborne games. Which in all honesty is a fair statement. The stamina bar draining attacks, Rolling with I-frames, characters that talk in riddles and in-depth branching lore all point to a Souls clone. However, I think Mortal Shell is different or if not different it’s trying to forge its own path in a saturated genre. The ability to change bodies which then changes playstyles with RPG paths to make them stronger. The two lives mechanic of getting back into the Shell once more when you lose all your health the first time. However, I’m not the person to compare the 2 so I can’t speak for the speed of movement, depth of exploration and other staples of the genre.

Like in most of my retrospectives, first impressions, and reviews I don’t want to spoil the deep and rich story. In fact, I barely got a taste of the story. Everything is told in riddles and pieced together as you learn more about your shells and the world around you. By that I mean it may take a few playthroughs to get the full scale of that is being told. As you play you get glimpses that you use to upgrade your shells. As they are spent, they give glimpses into the story of the shells.  In truth, I honestly can’t wait for the lore and theory videos to come out. It feels like it will take the whole community to figure out the truth of what’s happening in Mortal Shell.

I know I’ll be coming back to this game to chip away at the variety of bosses, explore the immense environments and learn the hidden story of Mortal Shell. If you are a fan of punishing yet rewarding games, this is for you. If you are like me and can’t play them but are willing to give it a shot and love the deep and storied lore, this game is for you. Mortal Shell has something for everyone. Mortal Shell is available right now and In October will be getting a physical release. Dive into this dark and mysterious world. Fight, learn, and uncover the truth to Mortal Shell. Finally, to answer that question, I know you want to ask. Yes, you can pet the cat.