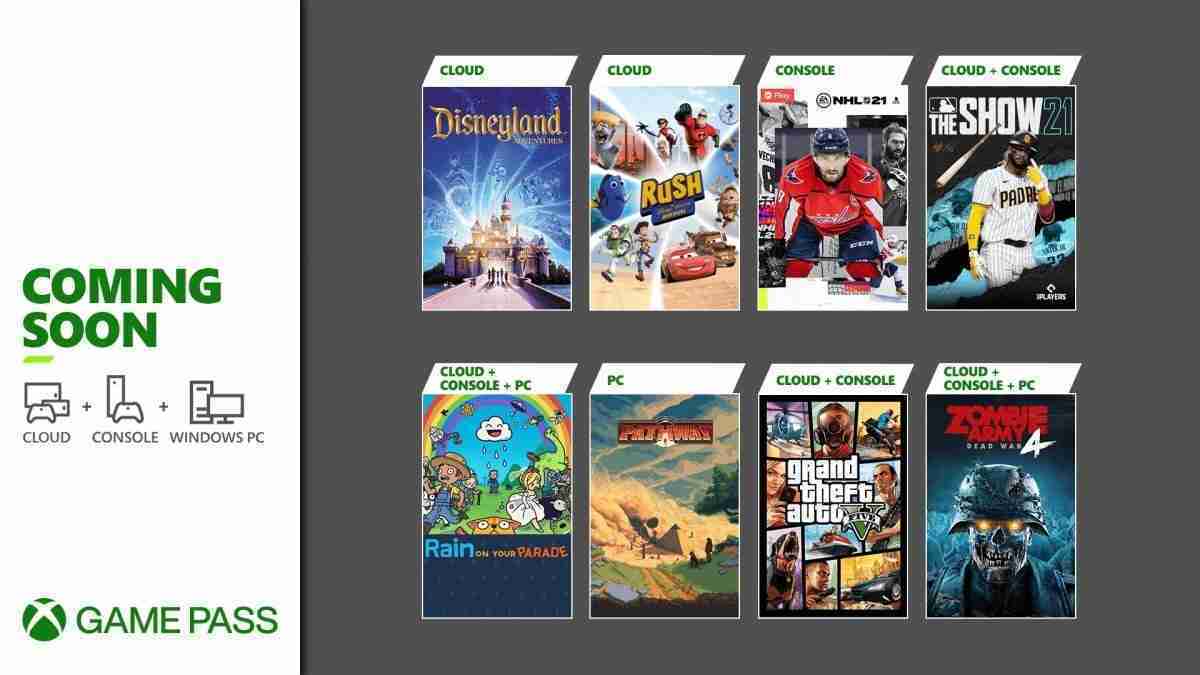 April 2021 Xbox Game Pass titles is already off to an amazing start with the addition of People Can Fly’s Outriders. The month is not over as more games are on its way to the consumer friendly service with the headline being former PlayStation exclusive MLB The Show 21. check out what you can expect via Xbox Wire.

Grand Theft Auto V (Cloud and Console) – April 8
When a young street hustler, a retired bank robber and a terrifying psychopath find themselves entangled with some of the most frightening and deranged elements of the criminal underworld, the U.S. government and the entertainment industry, they must pull off a series of dangerous heists to survive in a ruthless city in which they can trust nobody, least of all each other.

Zombie Army 4: Dead War (Cloud, Console, and PC) ID@Xbox – April 8
Hitler’s zombie hordes are back for more in this spine-chilling shooter from the makers of Sniper Elite 4! Abominable occult enemies, epic weapons and a harrowing campaign for 1-4 players await in 1940s Europe, as you fight to save humankind from undead Armageddon!

NHL 21 (Console) EA Play – April 12
Carve your path to superstardom in an expanded Be A Pro mode and go down as one of the league’s greatest. On the ice, change up your attack with all new moves, dekes, dangles, and evasive maneuvers, inspired by the league’s most groundbreaking innovators.

Rain on Your Parade (Cloud, Console, and PC) ID@Xbox – April 15
Travel the world as a cute cardboard cloud and ruin everybody’s day! Unlock new methods of mischief in over 50 levels, each with unique setting and objectives. Make new friends and help them too – it’s an adorable schadenfreude game!

Pathway (PC) ID@Xbox – April 15
Assemble a bold team of adventurers and journey through the desert-wilderness. In 1936, Nazi influence has spread, along with rumors of secret excavations, mysterious artefacts, and gruesome occult rituals… Outwit foes in strategic squad combat and locate ancient treasures before they fall into the wrong hands!

MLB The Show 21 (Cloud and Console) – April 20
MLB The Show 21 is coming to Xbox Game Pass on day one on Cloud (Beta), Xbox One, and Xbox Series X|S. Experience faster, deeper, and more intense moment-to-moment action on the field in 4K 60FPS on Xbox Series X|S consoles. Lead your ballplayer to Road to the Show and Diamond Dynasty glory as a two-way star and face your friends on PlayStation 4 or PlayStation 5 with cross-platform play.

Last September, we were thrilled to launch our first game with Xbox touch controls – Minecraft Dungeons. Since then, touch controls remain one of the top-requested features for cloud gaming, to unlock new ways to play on your Android mobile devices without the need for an external controller. Today, we’re excited to share that we have been working with developers to bring you 50+ great touch-enabled games that you can now play with Xbox Cloud Gaming (Beta). In addition to Minecraft Dungeons, Xbox touch controls are available with Sea of Thieves, Gears 5, Dragon Quest XI: Echoes of an Elusive Age, Slay the Spire, and many more games.

Here is a link to the full list of titles: Xbox Game Pass Library | Xbox

Playing games with your friends just got easier with Xbox Game Pass on your console. Within the Game Pass, you’ll see a new section that says Play with Friends when you have people on your friends list playing any of the games in Xbox Game Pass. You’ll be able to either jump right into a joinable multiplayer session or begin installing the games your friends are currently playing!

Genesis Noir (ID@Xbox) – Now available with Cloud
A noir adventure spanning time and space. When a love triangle between cosmic beings becomes a bitter confrontation, you’ll witness a gunshot fired by a jealous god — otherwise known as The Big Bang. Jump into the expanding universe and search for a way to destroy creation and save your love.

Octopath Traveler – Now available with Cloud
Eight travelers. Eight adventures. Eight roles to play. Embark on an epic journey across the vast and wondrous world of Orsterra and discover the captivating stories of each of the eight travelers. Use each character’s distinctive abilities in and out of battle and make decisions to shape your path.

Among Us: The Airship Update (PC) – Available now
Prepare for  but beware the Impostor. Hop onto the newest Among Us map: the Airship! Out now for 4 to10 players in local and online multiplayer, work together on the biggest map yet to carry out the greatest plan… though whether that’s as a Crewmate or Impostor is another question. Free hats, new tasks, and even more emergency meetings to call!

Grounded Photo Mode Update – Available now
This update brings with it the first iteration of Photo Mode available in single-player games, allowing players to show their creativity and share images from their life in the Backyard. Along with new content and features, this update is helping to pave the way for more to come!

Visit the Perks gallery on your Xbox Series X|S or Xbox One consoles, Xbox App on Windows 10 PCs, or the Xbox Game Pass mobile app on iOS and Android to claim these rewards:

Spellbreak: Chapter 2 Pass – April 8
Join the Order of the Vowbreakers as you reveal the secrets of the cataclysmic Fracture! As an Xbox Game Pass Ultimate member, you get a free Chapter 2 Pass that unlocks 50 levels of rewards, gold, and exclusive cosmetics. Can you complete the chapter and unlock the Vowguard Inquisitor?

April Quests launch today with an Easter Egg theme running throughout the month! Keep your eyes peeled as you play your favorite games. Claim and redeem the Points you earn from Quests to use for Xbox gift cards and more.

Try out these select monthly Quests that can earn you double points starting today!

what are your thoughts on April 2021 Xbox Game Pass titles. Leave some suggestions on what we can do better or change. Are you interested in writing, editing or just being a part of Lv1 Gaming? CONTACT US HERE!

Xbox Exclusive The Gunk Gets A Walkthrough Trailer Prior To Launch