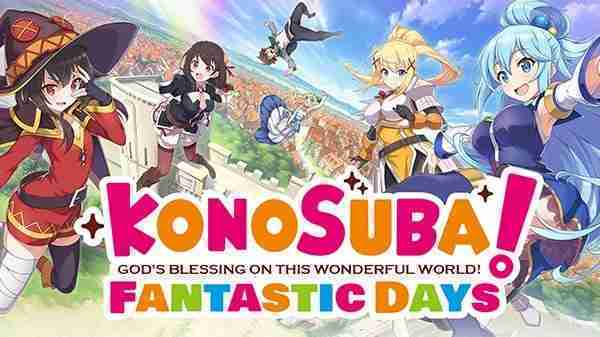 Anime and mobile games go hand in hand when it comes to japan. There are mobile games based on many popular franchises such as Dragon Ball Z, Naruto, Seven Deadly Sins and others. Well in February of this year Konosuba: God’s Blessing on This Wonderful World! Fantastic Days was released only in Japan on iOS through the Apple App Store and on Android via the Google Play Store. Now Konosuba Fantastic Days is coming to the rest of the world in 2021 thanks to Nexon.

The game has seen steady content releases and updates with new characters, new storylines, and new events; It has even has had a crossover event with another popular anime Re: Zero – Starting Life in Another World. The game follows the original storyline with the original characters from the anime series—including Kazuma Sato, Aqua, Megumin, and Darkness—as well as unique new stories with new characters created solely for the game. Along with adapting the original story and new ones; the original Japanese voice actors from the anime reprise their roles for the game.

You can watch the western launch trailer for Konosuba Fantastic Days down below. As well you can also find the official website here. And to keep up to date with the game follow the official Twitter account @Playkonosuba