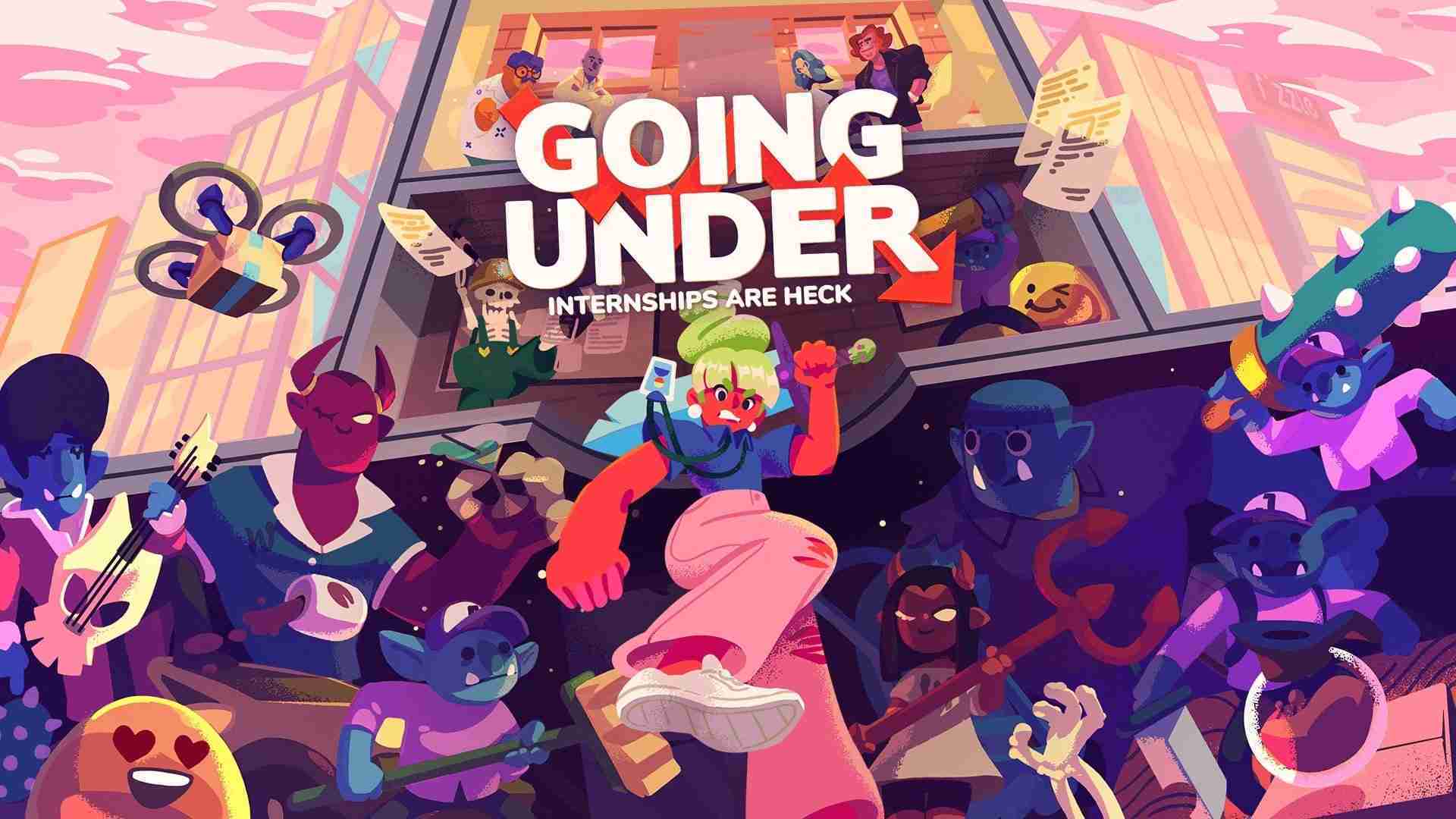 Going Under almost set itself up to be another run of the mill rogue-like dungeon crawler.  However, Aggro Crab (the developers) decided to use their first game to lampoon work culture, specifically Silicon Valley and Millenials.  With that unique hook, I found the plot and characters engaging which made me want to see the game through to the end. I also found some situations relatable (emphasis on some because the story gets fantastical).  Here is my review of Going Under, developed by Aggro Crab, and published by Team 17.

Going Under puts the players in the shoes of Jacqueline (Jackie) a new unpaid intern to a startup company Fizzle.  Fizzle is a new company that was recently bought out by Cubicle (an Amazon-like company) and its aim is to produce a meal replacement drink that also doubles as a soda.  Jackie was told that she was there to do marketing as well as assist other employees when she can.  This doesn’t go according to Jackie’s plan because her boss quickly assigns her to the task of killing monsters in the basement of the company.  The game gives a quick tutorial to the player as a monster runs in the office and Marv (Jackie’s boss) tells Jackie to go and kill the monster.  As the player we oblige and the tutorial is then complete.  A very quick and easy tutorial that gives the player info on movement and combat.  After the attack, it is then settled that Jackie is to go to the 3 basements and clear the boss and obtain ancient relics to aid in the success of the company.  Now admittedly, that is the basic premise of the game, however, I am selling the story short here as I don’t want to spoil the twists and turns the plot goes in but the twists are heavily telegraphed in multiple ways throughout the game.  Make no mistake, despite the cliches, I didn’t predict the direction the story was going to turn to and in hindsight, I should have seen coming.

The big thing I want to make clear is that for me the story was the best part of this game.  We as the player spend a lot of time getting to know the co-workers who have distinct and likable personalities (except for the ones that you don’t like but they are written to be hated).  The co-workers can aid Jackie by mentoring her which helps in the clearing of the dungeons.  Clearing the basements can be repetitive but the missions the co-workers put on me compelled me to see it through because I enjoyed the dialogue between Jackie and her co-workers.  The way missions are assigned is well done because I found myself grinning while receiving tasks, so shout out to the dialogue of this game.  The developers did not skip out on writing a script which for me helped me progress forward with the game because it made me want to see it through.  Many may not see it that way because the whole story is text-based, so players might opt to skip through the text bubbles but you would do yourself a disservice if you do because you would miss out on the relatability of the characters as well as some good puns and sarcasm.  It also helps that the overarching plot is shrouded a thin veil of mystery and its nice to see fantastical things play out in the game almost literally.  So a revelation happened midway through the game but when I thought back to my time with the game, the character(s) never lied to me I just wasn’t taking what they said at face value.

This game has a lot of thought behind it. I never even mentioned the 3 main dungeons.  Fizzle is built on top of previously failed startups.  The first basement is a jobs app.  The second basement is a dating app.  The 3rd (and not final basement) is a crypto-mining company which was my favorite of the three.  The attention to detail on each of the level designs and even the loading screens were consistent with the level’s themes and it made me grin.  The reason why I loved the crypto-mining dungeon is that the level is designed as if you were in an actual mine and the enemies have pickaxes that were mining for crypto-currency.  Enemies attack like they are mining.  There is a stock market ticker running through the walls.  Instead of picking up cash from enemies like in previous dungeons, they drop crypto-currency that you can use to buy stuff.  I even noticed a tiny little nod to Undertale of all things.  It’s very easy to miss/overlook but I noticed those small details.  To be fair, there may have been references that were there that I didn’t notice.

The gameplay is straightforward.  Jackies goes into the basement to do work.  Jackies comes out of the basement (either by clearing, dying, or quitting out of the run). Jackies gets some workplace parody-esque dialogue.  Jackie goes back into the basement.  Rinse and repeat.  The game only has 1 difficulty setting and the developers even provided a note in the main menu saying that the game is intended to be difficult.  But if the player finds the game unbeatable for them then in the main menu you can turn on assist mode where you can give yourself whatever buffs you want to your heart’s content.  It can range from more hearts, better weapon durability, lowered enemy health, etc.  I am happy to report that I did not need to use assist mode for the review but I’m happy that it is there for accessibility.

Now I’m not going to beat around the bush, the gameplay is repetitive.  As a matter of fact, from a gameplay perspective, the game shows its hand within the first 30 mins.  After playing in that time frame you should be able to see where the game is headed (from a gameplay perspective and not the story).  The player will do runs in the basement to do tasks assigned by the co-workers.  Doing so will level up the co-worker unlocking more perks to having them as your mentor.  I love the naming conventions that the game employs for the gear system – most notably apps.  Jackie can use her cell phone as part of the combat.  If you download an app it allows you to take a picture where the flash will blind the enemies.  One of the co-workers if you let them mentor you will allow you to use multiple “apps.” Another one gives you the company card which lets you buy items on credit and the debt literally slows you down because a big weight is shackled to your ankle slowing you down during your dungeon run.  Again the attention to detail, I racked up a $100 debt in the store and the weight was huge but as I began earning money killing the monsters the weight got smaller and less intrusive.  Also, I want to give a shout out to my co-worker that would shoplift a random item from the store for me.

While in the dungeon you can earn skills that buff up your character in various ways from making Jackie faster, stronger, deal electric damage if she is damaged, etc.  If you earn skills enough time you will be allowed to equip that skill at the start of the run, and you are only allowed one skill.  The rest of your skills need to be earned during the run.  I want to give a shout out to the store clerks, I know for a fact that I didn’t see every dialogue that was created for them because every time I entered an item shop they never repeated themselves.

The only thing I wish I could change is if the game would just let me keep the money I earned from dungeon to dungeon.  Its a bit annoying to begin a run and have zero dollars and then see the item shop after you only cleared one room and have less than $10 to your name, that and also never seeming to be able to afford big-ticket purchases, which might be the point since Jackie is an unpaid intern.

This game is not a very graphically intensive game.  The art style, on the whole, is unique as there aren’t many games that look like it.  Due to the simplicity, the game runs at 1080p @ 60fps on PC, PS4, and Xbox One however it was turned down for the Nintendo Switch port at 900p @ 30fps docked and 720p handheld.  I only know about the Switch specs as secondhand knowledge as I reviewed the game on PS4.  From personal experience, it’s very easy to make my PS4 sound like a jet engine, this game had my PS4 run as quiet as an Xbox One so I know this game is not taxing on my hardware.  This is good because I had a stable experience throughout and I was almost happy to report zero glitches during my playthrough but on the last day of my playing of the game, I experienced my character teleporting while looking at an item at the item shop.  Luckily, this did not affect gameplay as it was an isolated incident to this particular room and in a roguelike, I won’t be in that same room again.  It also could have been an issue with the camera angle.  Either way, I’m just happy it happened only once.

I liked the audio design for the game. The soundtrack was on point for the direction of this game.  A good majority of the soundtrack is elevator music but turned up to be suitable for a dungeon crawler.  I don’t know how they managed to do that but they did.  Even after I stopped playing the game I can still hear the music.  If this game had a bigger budget I wonder how this game would have turned out with full voice acting for all the dialogue. Maybe it was for the better because as the player, you can read the text in whatever voice you imagine fits that character.

Overall, the game is a solid game all around.  There aren’t any glaring flaws but rather minor nitpicks.  The game should take about 8 to 10 hours to complete and longer if you go for the platinum trophy or other completionists runs on other platforms.  This game is definitely a game that I can see someone playing to unwind or be a palette cleanser and maybe even a comfort food type game.  It has a quirky story with a good sense of humor to keep you motivated and while it doesn’t excel at anything, it doesn’t really falter at anything either.  I would classify this as a good game and so I give it a 7/10.

The review code was provided by the publisher Team 17 for the purposes of review.

For more roguelike games check out our reviews for As Far as the Eye and BPM: Bullets Per Minute