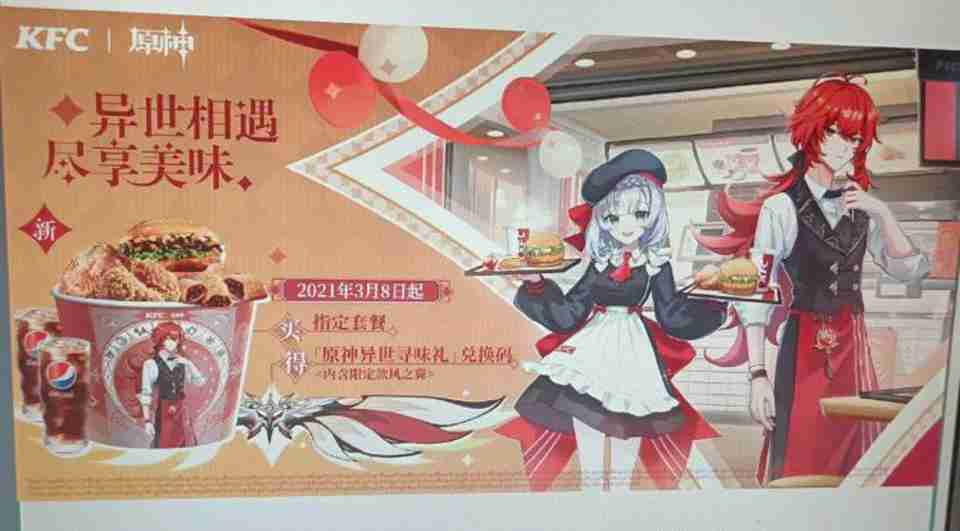 It seems that Genshin Impact’s appeal and reach just don’t stop. Having been a big success since its launch the game has garnered much love from its community. And now it seems they are getting some finger-lickin’ fun, as the Genshin Impact KFC collaboration is now live.

This collaboration was previously leaked last in November an article on Forbes, reported that a leaked image of Diluc and Noelle were seen in new outfits with KFC advertising materials. Well during the previously shown 1.4 Update trailer on March 6th it was confirmed at the end of the trailer.

You can see the official art images released in the tweet from Zeniiet, a known Genshin Impact poster, who showed some of the promotional materials and stickers involved.

As you can See Noelle and Diluc are in their worker outfits but can see a Hilichurl enjoying some of the Colonel’s famous chicken. Any fan who visits KFC will get a commemorative bucket of either Diluc or Noelle; as well as stickers of several characters, a code for an in-game glider, and a dish recipe.

However, fans should note this collaboration is only available currently in China. But an announcement on the official Genshin forums states that the items will be available globally. They will release more information around July for it, however, so check back as we keep you updated.

So with the Genshin Impact KFC collaboration now live how are people feeling about fast foods’ favorite man more actively involved in gaming. With a gaming console on the way, it seems that KFC gaming is more and more active. Let us know down below in the comments.

Genshin Impact is currently out on PS4, PC, and mobile devices with a Switch version scheduled for later this year.