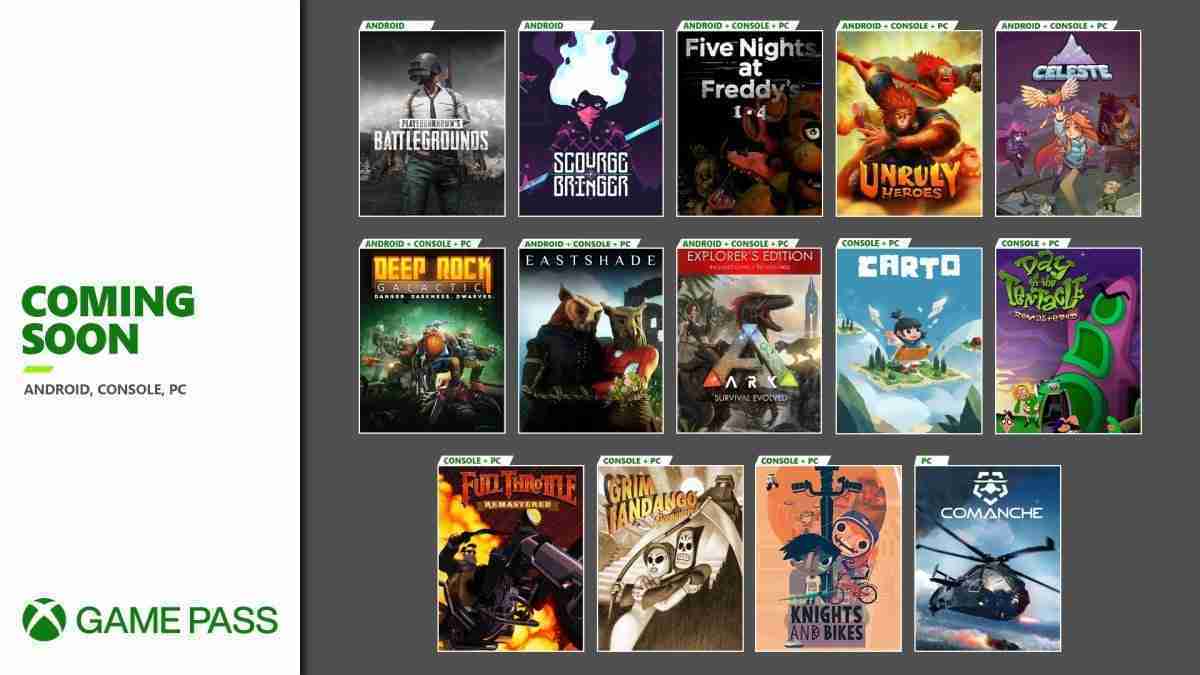 Each month Xbox Game Pass subscribers will new games and perks added for their enjoyment. Here is some of what Xbox Console, PC and Android users can expect for Xbox Game Pass November 2020. All information is via news.xbox.com.

Carto (Console & PC) ID@Xbox – October 27
Separated from her Granny during a storm, young Carto must use her innate cartography powers to map and manipulate the world around her on her quest to be reunited. As she discovers new “pieces” of the game map, players can rearrange them to shape the levels themselves – unlocking new paths, puzzles, and story moments.

Day of the Tentacle Remastered (Console & PC) – October 29
Released by LucasArts in 1993 as a sequel to Ron Gilbert’s groundbreaking Maniac Mansion, Day of the Tentacle is a mind-bending, time travel, cartoon puzzle adventure game in which three unlikely friends work together to prevent an evil mutated purple tentacle from taking over the world! Double Fine’s remastered version is a perfectly preserved piece of puzzle and adventure, and it’s now available with Game Pass! Travel through time and enjoy revamped artwork (or swap back and forth between classic and remastered modes) as you solve puzzles across multiple eras. Day of the Tentacle is an all-time comedy classic and this special edition has been lovingly restored and remade with the care and attention that can only come from involving the game’s original creators.

Five Nights at Freddy’s (Android, Console & PC) ID@Xbox – October 29
The Freddy Fazbear animatronics beloved by thousands of children have always been quirky, especially after hours…  Many previous night guards have reported they act almost “possessed”, but that can’t be, they are just machines, right? There is nothing for you to worry about. Play through the original four titles and discover for yourself. Just show up for your night shift and do the job well and everything will be alright. Or will it…

Grim Fandango Remastered (Console & PC) – October 29
One of the most acclaimed adventure games of all time arrives on Xbox Game Pass! Manny Calavera is a travel agent at the Department of Death, selling luxury packages to recently departed souls on their four-year journey to eternal rest. But there’s trouble in paradise: a conspiracy that threatens Manny’s very salvation and the afterlife itself. Originally released by LucasArts in 1998, Grim Fandango’s remastered edition comes care of Double Fine Productions and brings revamped visuals and sounds (including fully orchestrated music) to a beloved classic.

PlayerUnknown’s Battlegrounds (Android) ID@Xbox – October 29
Land, loot and outwit your opponents to become the last player left standing in a thrilling game experience full of unexpected, adrenaline-pumping moments. PUBG’s new Season 9 is dropping on October 29 with a new map called Paramo. Cradled hidden among the clouds in the highlands of South America lies Paramo, an ancient land with ancient secrets. Paramo is a 3×3 map with a dynamic world new to PUBG. This dynamic world system alters locations between matches, making every trip to Paramo a unique experience. Take on the Battlegrounds like never before with cloud gaming (Beta) with Xbox Game Pass Ultimate.

ScourgeBringer (Android) ID@Xbox – October 29
From the developers of NeuroVoider, ScourgeBringer is a fast-paced free-moving roguelite platformer, much like a crossbreed between Dead Cells and Celeste. Set in a post-apocalyptic world where a mysterious entity wreaked havoc on all humanity, ScourgeBringer puts you in the shoes of the deadliest warrior of her clan: Kyhra. Help her explore the unknown and slash her way through ancient machines guarding the seal of her past, and maybe the redemption of humanity.

Unruly Heroes (Android, Console & PC) ID@Xbox – October 29
Grab your controller and set out on an epic adventure of intrigue and discovery inspired by the timeless 16th century Chinese novel “Journey to the West.” With its simple to pick up, hard to master combat system across 4 playable characters, evolving gameplay and surprises galore, Unruly Heroes is not your run-of-the-mill action-platformer. Take on the roles of Wukong the Monkey King, Sanzang the Sleepy Monk, Kihong the Greedy Pig and Sandmonk the Sensitive Brute as they travel westward in search of the scattered remnants of the Sacred Scroll. Along the way, whether it be solo or in local co-op, master the combined strength of the heroes and kung-fu fight a diverse lineup of creatures and demons within a colorful hand-drawn fantasy world.

Celeste (Android, Console & PC) ID@Xbox – November 5
Help Madeline survive her inner demons on her journey to the top of Celeste Mountain, in this super-tight platformer from the creators of TowerFall. Brave hundreds of hand-crafted challenges, uncover devious secrets, and piece together the mystery of the mountain.

Comanche (PC) – November 5
Comanche is a modern helicopter shooter set in the near future. You have the choice to delve into the evolving single-player campaign and make a difference in a conflict of global proportions or compete with other Comanche players from all around the world in the explosive, team-based multiplayer modes.

Eastshade (Android, Console & PC) ID@Xbox – November 5
You are a travelling painter, exploring the island of Eastshade. Capture the world on canvas using your artist’s easel. Talk to the inhabitants to learn about their lives. Make friends and help those in need. Discover mysteries and uncover secrets about the land. Surmount natural impasses to reach forgotten places. Experience how your actions impact the world around you.

Knights and Bikes (Console & PC) ID@Xbox – November 5
Knights and Bikes is a hand-painted action-adventure for 1 or 2 players, set on a British Island in the 1980s. It’s a coming-of-age story starring Nessa & Demelza, exploring the coasts of Penfurzy on their trusty bikes, looking for a legendary lost treasure in a Goonies-inspired tale of excitement, danger, fun and friendship.

Xbox touch controls unlock more ways to play via cloud gaming (Beta) with Xbox Game Pass Ultimate on your Android phone or tablet. Last month we launched our first game with touch controls, Minecraft Dungeons; a big thank you to everyone in the community for your feedback! If you missed it, last week we announced 10 additional games in our library featuring Xbox touch controls!

Dead by Daylight: The Eternal Blight Event – Until November 4
Launched with this Tome is a time-limited in-game event called The Eternal Blight which is available starting October 21 until November 4. This event features returning Survivor items, Halloween themed charms, offerings and themed in-game content, plus new Survivor and Killer addons including the very first universal Killer add-on. Finally, players would be remiss to not take advantage of the giant Halloween sale on outfits in the in-game store.

Fallout 76: Fasnacht Parade (October 30 – November 2)
Fasnacht Parade is a repeatable Seasonal Event that begins October 30 and runs every hour until November 2. Speak with the Master of Ceremonies in Helvetia to join your fellow dwellers in aiding the town’s robotic shopkeepers as they set up for the annual parade. Help them complete a variety of party prep activities, like playing musical instruments, decorating the town, and more. Once everything is ready, the dutiful Protectrons will line up to begin the Fasnacht Parade. Keep them safe on their route to earn rewards, like fantastic Fasnacht Masks. Trade and collect Fasnacht Masks while they are still around.

Minecraft Dungeons Apocalypse Plus Difficulty & Spooky Fall Limited Time Event
For Minecraft Dungeons players who aren´t afraid of a challenge, the free update coming to the game on October 26 will make their dreams (or nightmares) come true. The update will introduce the new Apocalypse Plus feature, which adds a harder difficulty mode where mobs are meaner, faster and more powerful than ever. And starting on that day, and through November 3, you´ll be able to experience the creepy trials of the Spooky Fall event. The time-limited Seasonal Trials will bring new challenges – and new rewards! The prizes for surviving these supernatural trials will be ultra-exclusive gear and weapons that are a must-have for this spooky season. Make sure you join in the frightful festivities before time is up!

Secret Neighbor Halloween Update
Secret Neighbor is getting a major update that adds new features to the Xbox One version: the new Neighbor class adds an extra layer of challenge; a darker visual presentation and Halloween decorations deliver a spooky experience to the players. Alongside that, the new major update contains plenty of quality of life improvements as well as some new content for players to enjoy.

State of Decay 2 Swine & Bovine Outfit
State of Decay 2: Juggernaut Edition has a new outfit called the Swine & Bovine, a grungy mechanic jumpsuit + welder’s mask that will be available as an in-game bounty. All players have to do is log into the game between October 28 and November 4, and it will be automatically added to their closet!

Perks are getting into the Halloween spirit! Enjoy this huge batch of new Perks to close out your spooky October. Don’t forget to claim your Perks by going to your Perks gallery on your Xbox One console, Xbox App on Windows 10 PC, or the Xbox Game Pass mobile app on iOS and Android.

PlayerUnknown’s Battlegrounds (Available October 29)
We have two brand new packs for you! Grab the October Horror Pack, including the highly requested Bloody Nurse costume and other goodies like the [BattleStat] Rip Tide – SKS weapon skin and 20,000BP. Also, pick up the Flower Child Pack, including theFlower Child costume setand get 5 levels for your Survivor Pass. Plus, show off your Chicken Dinner with the Victory Dance emote!

Dead by Daylight (Available October 29, Not available in South Korea)
Claim your Curtain Call Bundle for Dead by Daylight including 2 characters, the Clown (Killer) and Kate Denson (Survivor) and get free cosmetics for both of them!

“Warm Bodies” – Free Movie Rental (Available October 29, US only)
Watch this zombie comedy for Halloween! A funny new twist on a classic love story, “Warm Bodies” is a poignant tale about the power of human connection. Enjoy this free rental on Microsoft Movies & TV.

Gears POP! Gets First Update Before the End