July 15 -16 will bring together some of the biggest names in videogame publishing for “First Playable”. It will incorporate the IVGAs and Nintendo Italia Indie World Summit in one big event. Having already announced its transition to digital for the 2020 edition, the Italian Interactive Digital Entertainment Association (IIDEA), has finally lifted the lid on what attendees can expect from the second annual First Playable. Italy’s leading international B2B gaming event. IIDEA is also delighted to announce that Epic Games’ Unreal Engine will be the Platinum Sponsor for First Playable’s Digital Debut show.

Major publishers like Electronic Arts, Xbox, Nintendo of Europe, SEGA, Sony Interactive Entertainment, Square Enix, and Ubisoft all confirmed to be in attendance. First Playable’s Digital Debut will run online for two days between 15 and 16 July 2020 and will also include post-show talks from games as diverse as Open Lab’s Football Drama, to TORI by Xplored and many many more. In addition to the Nintendo Italia Indie World Summit and the Italian Video Game Awards. 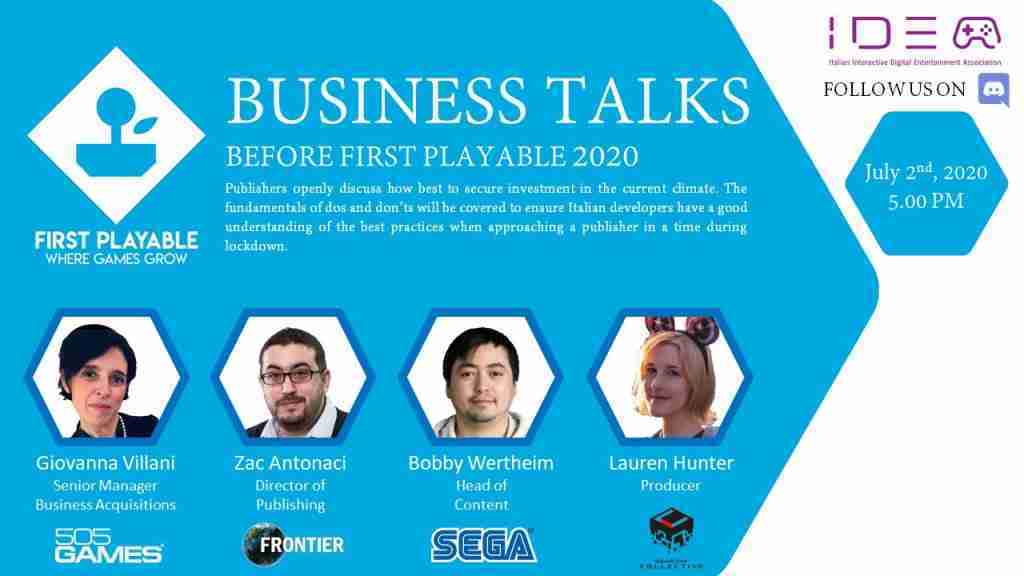 First Playable will also be the home for the eighth annual Italian Video Game Awards on the evening of Wednesday 15th July at 8 pm BST / 9 pm CET. The event will be streamed online via IIDEA’s website and their Facebook and YouTube channel and will be presented by the British hosting duo, Julia Hardy and Aoife Wilson. IIDEA are also excited to share the nominees 2020’s Awards for the first time.

Awards for Outstanding Individual Contribution and Outstanding Italian Company will also be given out during the evening’s showcase. Both First Playable 2020 and the IVGAs will serve as a showcase for the Italian video games industry. Highlighting the learnings of the country’s leading studios and acting as a bridge to their peers across Europe and, indeed, the wider world.

Thalita Malagò, General Secretary at IIDEA adds, “Though transitioning First Playable to a digital event for its second run was always going to be a challenge, we’re really excited about the people we’ve pulled together and we can’t wait to see the connections people make this time around, just as they did in Pisa in 2019.”

Stefania Ippoliti, Director of the Toscana Film Commission commented, “With less than a month to go until the second edition of First Playable in Pisa, we look forward to welcoming Italian game developers, International game publishers, and investors for an exciting two days of dialogue, experience sharing, and business. Tuscany is online and waiting to welcome you!”
IIDEA have partnered with MeetToMatch to produce the event, and the Toscana Film Commission to bring the flavor, look and feel of the world-famous Italian region to the event’s audience via the power of digital technology.  IIDEA is also delighted to add that prior to First Playable, attendees can sign up for coaching sessions with professionals from across Italy to help attendees prepare for the show and ensure maximum success for the Italian development community. The confirmed coaches are: The IVGAs 2020 will be streamed across IIDEA’s YouTube and Facebook accounts allowing for the widest possible audience. The participation of the live audience of First Playable’s Digital Debut will be encouraged on the night by the event’s hosts using the hashtags #IVGA2020 and #FirstPlayable.

For more information please visit the IIDEA website at www.iideassociation.com.