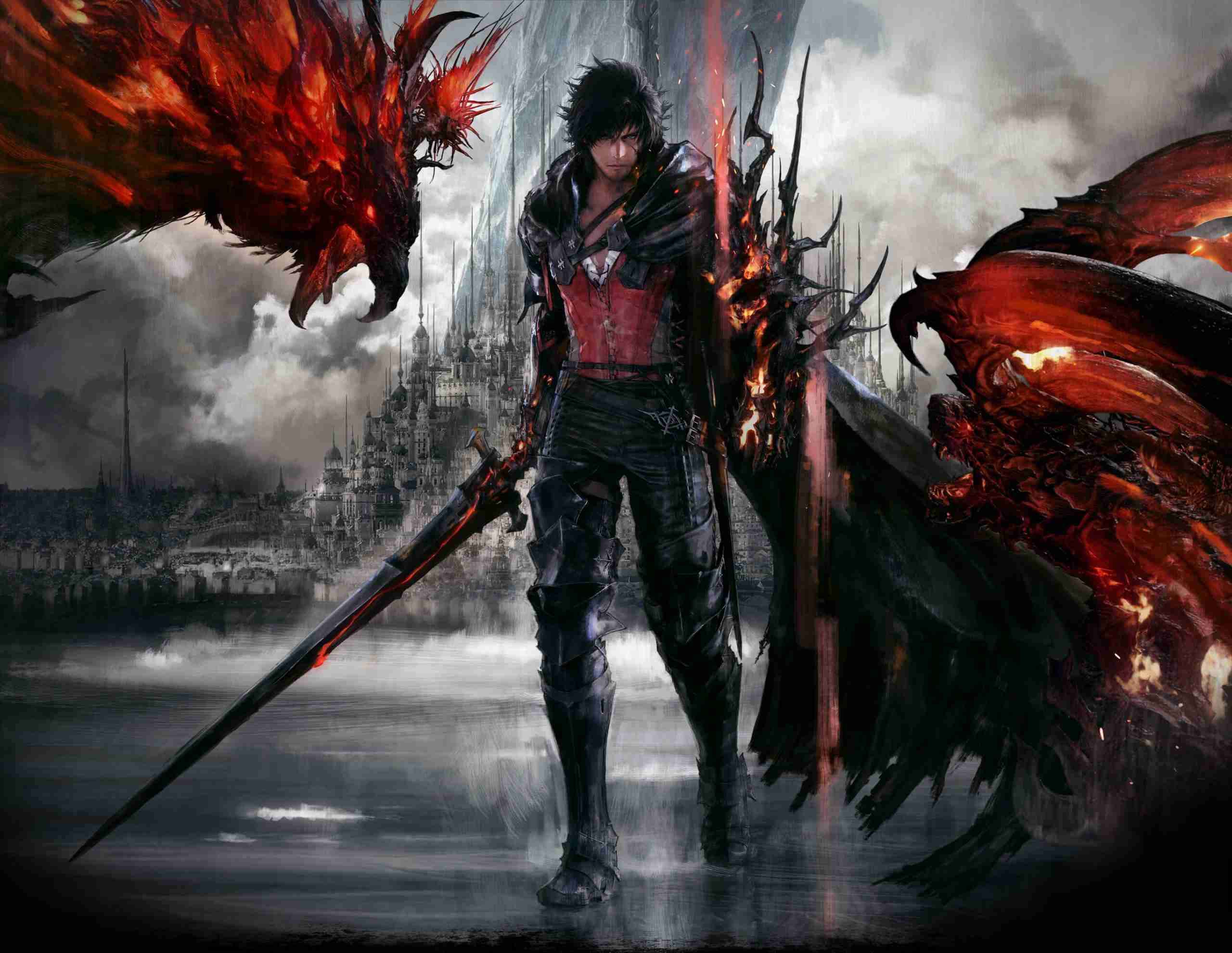 During Sony’s big reveal showcase they came out swinging with an announcement that had fans excited: Final Fantasy 16. To start their big showcase back in September they started with a trailer for Final Fantasy 16. The reveal trailer was so popular that as of now it has 1 million views on the Sony Youtube video.

The trailer titled “Awakening” gave an awe-inspiring look at the world of Final Fantasy 16. But outside of the tease of the story, we know very little of the game and its world; until now that is. Just this past week Square Enix, launched the official Final Fantasy 16 webpage, and along with the official page a slew of new info.

Some of the biggest information is more about the world and this universe; As well as we get a look at several character bios. For those wanting to read the bit of information available you can visit the site here. You can see the original teaser trailer down below as well.

Let’s go into some of the information we knew and what has now been released. The first big thing to note for Final Fantasy 16, from the trailer and website is which universe this resides in; and that would be the Fabula Nova Chrystallis Final Fantasy lore. While there are games in this universe that are direct sequels the biggest tying theme is their mythos. Universes shared by their gods and their worship and power of the World or Mother Crystals. The Titles within this shared mythos are Final Fantasy XIII & its sequels, Final Fantasy Type-0, and Final Fantasy XV. While Final Fantasy XV would later distance itself, its lore is apparent for fans of the franchise or those who have played the other titles.

Another massive aspect to take into account is that from the trailer it seems that the story and world are more inspired by European history. By that, the characters exist within Dominions under an Archduke and have a society and even style that is reminiscent of 14th Century kingdoms, similar to what was seen in the world of that of the Witcher series of games and novels. Now that we’ve established the ties lets explore the newly released info below:

The first character of the main cast is Clive Rosfield: the firstborn son of the Archduke of Rosaria. In being the firstborn son he was expected to inherit the power of the Phoenix’s flame; And becomes it’s Dominant, the vessel for those who channel the Eikon or deity of the Mothercrystal. When the time came it was Clives’ younger brother, Joshua, to bear the burden of becoming the Dominant of Rosaria. After his change in fate, Clive dedicates himself to mastering his swordsmanship. In doing so, at the age of fifteen, he wins the Ducal tournament and is dubbed the First Shield of Rosaria: the Dominant’s personal guard. Along with being the First shield, he is blessed with the ability to wield part of the Phoenix’s flame. However, a mysterious dark Eikon known as Ifrit, will bring tragedy to Clive and send him down a path of revenge.

The second character of the main cast is Joshua Rosfield: The second son of the Archduke of Rosaria. Joshua awoke as the Dominant of the Phoenix soon after his birth. Despite his noble upbringing, Joshua treats all his father’s subjects with warmth and affection. Joshua often resents the fact that he, the weaker younger brother, was given the power of the Phoenix and not his stronger older brother. Clive is ready to ride headlong into danger to protect those around him and fight; Where Joshua hates to even look at vegetables on his plate. Everything changes as both Clive and Joshua are swept up in the tragic events that will change Clives’ life forever.

And finally, the last character we meet is Jill Warrick. Jill was born in the fallen Northern Territories and taken from her homeland at a young age to become a ward of Rosaria, securing peace between the two nations. The Archduke of Rosaria insisted that she be raised alongside his sons Clive and Joshua. Now at twelve years of age, she is as much a part of the Rosfield household as the royal brothers. Kind, gracious, and unassuming Jill is a close friend and confidant to the brothers.

The last bit of information is short biographies of each of the Six Dominions that exist within the land of Valisthea and more on the world itself.

First up is information about Valisthea – The land blessed by the light of the Mothercrystals. The land of Valisthea is studded with Mothercrystals—glittering mountains of crystal that tower over the realms around them, blessing them with aether. For generations, people have flocked to these beacons to take advantage of their blessing, using the aether to conjure magicks that let them live lives of comfort and plenty. Great powers have grown up around each Mothercrystal, and an uneasy peace has long reigned between them. Yet now the peace falters as the spread of the Blight threatens to destroy their dominions.

The next information available is about Eikons. The Eikons are the most powerful and deadly creatures in Valisthea. Each resides within a Dominant—a single man or woman who is blessed with the ability to call upon their dread power. In some nations these Dominants are treated like royalty in admiration of this strength—in others, they are bound in fear of it, and forced to serve as weapons of war. Those who are born as Dominants cannot escape their fate, however cruel it may be.

And now we have all six Dominions starting with:

The Grand Duchy of Rosaria – Long ago, a group of small independent provinces in western Valisthea found strength in unity, and formed the Grand Duchy of Rosaria. After years of relative prosperity, the duchy now finds itself threatened by the spread of the Blight—a threat that, left unchecked, would doubtless usher the realm to ruin. Rosaria draws its aether from Drake’s Breath, a Mothercrystal situated on a volcanic island off the coast. The Dominant of the Phoenix, Eikon of Fire, is enthroned as Archduke when they come of age.

Next, we have the Holy Empire of Sanbreque – Sanbreque is the largest theocratic force in Valisthea. The Empire’s holy capital Oriflamme is built around Drake’s Head, the Mothercrystal that blesses the surrounding provinces with abundant aether. The people happily take advantage of this, living in comfort and security under the watchful gaze of the Holy Emperor, whom they worship as the living incarnation of the one true deity. The Dominant of [REDACTED] serves as the empire’s champion, taking to the field in times of war to rout its enemies.

Now we have The Kingdom of Waloed – Waloed claims the entirety of Ash, the eastern half of Valisthea, as its dominion. The kingdom’s control of the continent has oft been tested by the orcs and other beast men who make their home there, but the current ruler of the realm—Dominant of [REDACTED] —has succeeded in quelling their rebellions. Using the power of the kingdom’s Mothercrystal, Drake’s Spine, this new king has built up a mighty army, with which he now seeks to test the borders of his neighbors.

And here we have The Dhalmekian Republic – The Dhalmekian Republic is made up of five states, from which the members of its ruling parliament are drawn. Its Mothercrystal, Drake’s Fang, is half-hidden in the heart of a mountain range. The republic’s control over it, and its aether, securing the obedience of the large part of southern Valisthea. The Dominant of Titan, Eikon of Earth, is installed as a special advisor to parliament and has a significant say in its decision-making.

Now for The Iron Kingdom – A small group of islands off the coast of Storm, the western half of Valisthea’s twin realms. Here the Crystalline Orthodox, an extreme faith that worships crystals, reigns supreme. The Iron Kingdom controls Drake’s Breath, the Mothercrystal that sits at the heart of one of their islands—long a source of contention with neighboring Rosaria. Isolated and aloof from the mainland nations, the Ironblood speak their own language. Orthodox doctrine judges Dominants to be unholy abominations, and any unlucky enough to be born on the islands are executed.

And finally, the last dominion is The Crystalline Dominion – The Crystalline Dominion sits at the heart of Valisthea, built around the tallest of all the Mothercrystals, Drake’s Tail. Many bloody battles were fought for control of this small plot of land due to its strategic importance. Till the warring realms finally agreed to an armistice. As part of the peace treaty, the islands around Drake’s Tail became an autonomous dominion led by a council of representatives from the surrounding nations. Each realm enjoying equal claim to the Mothercrystal’s blessing. No Dominant makes their home there.

This is all the information released thus far, and with no exact release date or even a time frame. It may be a while before we see this newest entry in the long-running Japanese RPG franchise. Expect us to update you guys as more information comes out. Final Fantasy 16 is set to be a Playstation 5 Exclusive.