Todd Howard Talks Starfield | Beyond Good & Evil 2 FAR AWAY | Smash World Tour Canceled – 2XP 227 Bravery and Greed Review – Bite-Sized Rogue-lite NEOWIZ Sale On The Nintendo eShop INDIE Live Expo, Winter 2022 Crisis Core FFVII Reunion Digital Preorders Are Live
Today during the Summer Game Fest live stream Epic revealed Unreal Engine 5 running on PlayStation 5. It was showed using a 2 minute long demo that looked absolutely stunning. This seemed like our real first look into what true next generation gaming will bring to gamers moving forward. Even more exciting is that this game was running on the yet to be revealed, and highly anticipated, PlayStation 5. Today’s stream should be a great sign of things to come over the remaining months of Summer Game Fest. Some highlights of Unreal Engine 5 from the reveal include;

– can use movie assets that consist of hundreds of millions or billions of polygons
– new dynamic GI solution called Lumen
– no LODs or pop-ins
– Out in 2021, supports current-gen and next-gen devices + iOS, Android, Mac and PChttps://t.co/aSWzmBtbtl pic.twitter.com/54Jh6jIwCU

A key highlight was Lumen, which is described by epic as a fully dynamic global illumination solution that immediately reacts to scene and light changes. The system renders diffuse interreflection with infinite bounces and indirect specular reflections in huge, detailed environments, at scales ranging from kilometers to millimeters. Artists and designers can create more dynamic scenes using Lumen, for example, changing the sun angle for time of day, turning on a flashlight, or blowing a hole in the ceiling, and indirect lighting will adapt accordingly. Lumen erases the need to wait for lightmap bakes to finish and to author light map UVs—a huge time savings when an artist can move a light inside the Unreal Editor and lighting looks the same as when the game is run on console. 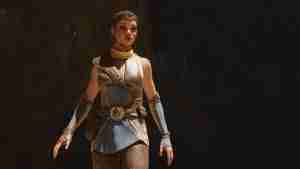 Epic also revealed Nanite, which is virtualized micropolygon geometry frees artists to create as much geometric detail as the eye can see. Nanite virtualized geometry means that film-quality source art comprising hundreds of millions or billions of polygons can be imported directly into Unreal Engine—anything from ZBrush sculpts to photogrammetry scans to CAD data—and it just works. Nanite geometry is streamed and scaled in real time so there are no more polygon count budgets, polygon memory budgets, or draw count budgets; there is no need to bake details to normal maps or manually author LODs; and there is no loss in quality.   All exciting things to look forward to as developers contiue to push gaming forward.
What’s your Reaction?
+1
0
+1
0
+1
0
+1
0
+1
0
+1
0
+1
0
Facebook Twitter Email
👁️ 68