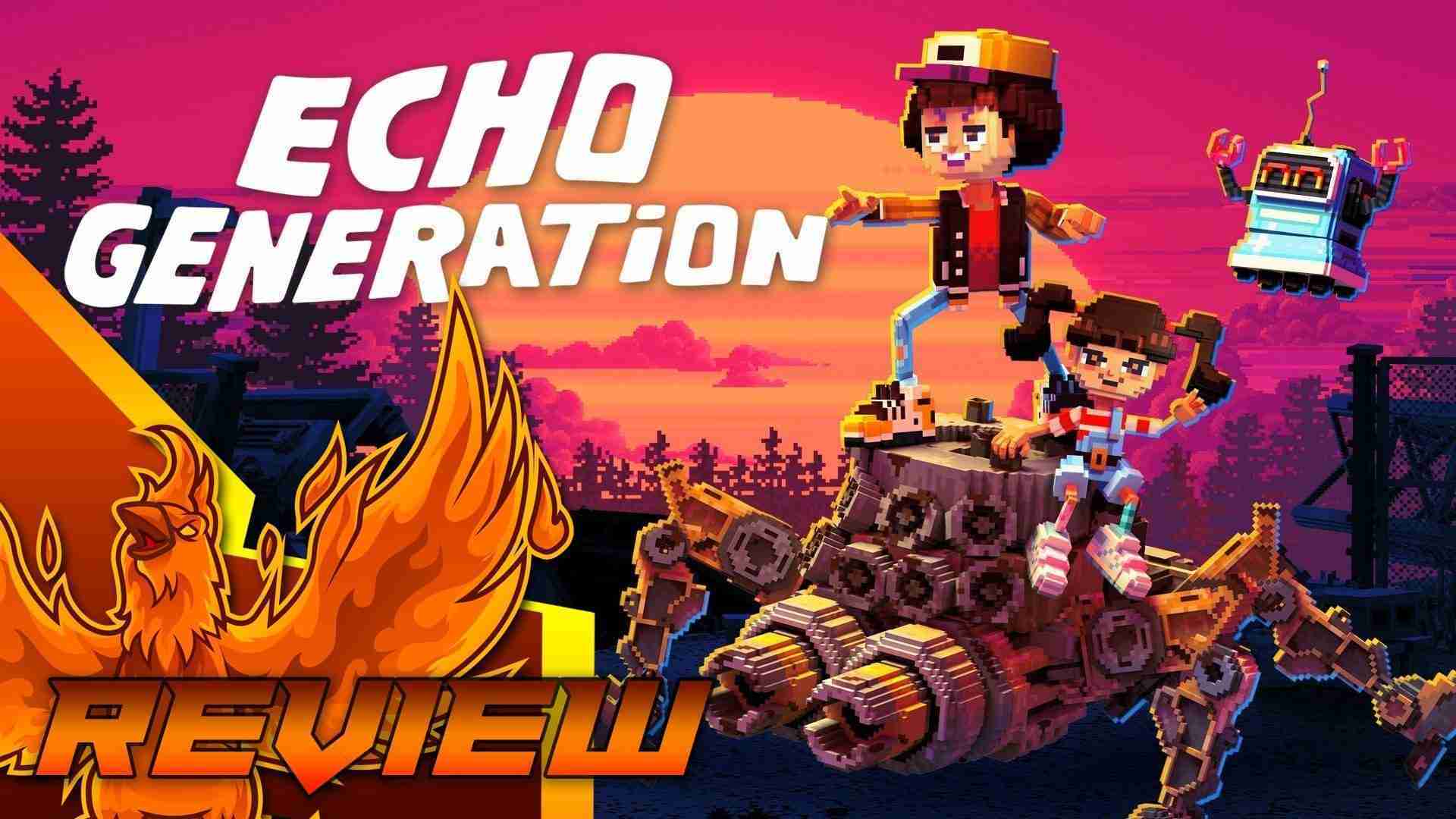 Imagine it. It’s summer break. You’ve waited months for this to come back around so you could hang with friends, have fun, make memories, and completely enjoy yourself. Except, the adventure that’s coming walks with the supernatural. In Echo Generation, you and your crew investigate mysteries that have been appearing around Maple Town. Set in a small town, word travels fast. From alien sightings, weaponized robots, & grandmothers serving freshly baked cookies. This turn-based adventure developed and published by Cococucumber has plenty to fuel our summer fun.

When it comes to the graphics of Echo Generation, it excels at delivering unique visuals with its beautiful voxel art style. Something we’ve also seen in Cococucumbers’ previous title Riverbond. Although they share the same artistic design, Echo Generation takes it up a notch by having Series X/S enhancements that make the models, lighting, backgrounds, and other elements of the world shine brilliantly. There’s no lack of beautiful areas within this game. I couldn’t take my eyes off the screen because they were glued to how visually stunning this title is.

But, while Echo Generation has its moments of being beautiful, there is a bit of ugly around the edges. Something I noticed during my playthrough was that backgrounds would blur themselves out. Frequently having textures pop in and out was definitely a distraction. It took away from the otherwise incredible visual appeal with how often it happened.

Echo Generation takes a bold chance with its turn-based and timed mechanics. On one hand, it pays off as the combat moves are extremely unique for your party members and pet sidekicks. They visually look awesome and implement some great execution and minigames within them. Something that we’ve seen ala Saturday Morning RPG & Costume Quest. This is something I loved and enjoyed during my time with Echo Generation. The timing side also pays off as it adds something that’s missing from the combat. It felt inspired by Lost Odyssey, but for beginners to the RPG realm.

But, this does turn into a double-edged sword at times. As welcoming as the timing-based combat is, there are moments where it got spotty and moved too fast/slow in some battles. Sometimes feeling incredibly unresponsive. Also, another thing that Echo Generation does is randomly spike the difficulty up for mobs, more so than even bosses. Not to mention there are moments where you’ll need to grind for money to advance some story moments and level up. Combining the time it takes (getting a whopping $1.30 per fight) and some brutally unfair moments, it loses its appeal if you aren’t used to some labored grinding. Oh, and if you don’t have food or a rest area unlocked there’s a ton of back and forth running to rest and get back to grinding.

The audio of Echo Generation is one of its standouts. It’s made up of an awesome soundtrack that’s filled with Synthwave & Electro music. Throughout the game, you hear some bombastic and killer songs that are either chill, hype, or toe-tappers that will definitely leave you with some ear worms. There is also a cool little feature that makes the audio experience more unique. You can unlock the best songs as collectible cassettes to listen to on your boombox. “Dream Machine” (from a later boss battle) has to be one of the best songs and is a personal favorite of mine.

When it comes to the story of Echo Generation, I expected a bit more lighthearted yet serious moments ala Oxenfree. Although there are moments where we get that, they are few and far between. I loved the reveals and cool moments that happen within the story. But again, they seem too sparse. The story and pacing are slowed as Echo Generation is centered around fetch quests and very vague direction. NPC’s will drop a hint as to what item you may need next. However, you’ll be on your own as you figure out what you need that cutout, encyclopedia, or propane tank for. Which is something that can get frustrating at times.

For the time I put into Echo Generation, I wanted to love the story as much as possible. As threads began to fully unravel, they did get interesting. But that interest slowly began to wane as unnecessary things to do and constant backtracking were always looming. At the very least I can say that there were a some rather interesting NPC’s throughout that helped keep the experience enjoyable.

Echo Generation has a full body of potential. It has a beautiful art style, a great soundtrack, and an awesome combat system that’s visually appealing. It even has some of the most unique characters you’ll meet throughout its story. However, a lot of this gets tossed to the wayside as the visuals go blurry with pop-in, the combat works against you, the difficulty spikes randomly, and the story begins turns into one massive fetch quest. I wanted to love this game completely as it has moments where everything works, but I found myself frustrated because not everything aligned as one total package. In the end I am left with an experience that fell a little short of what it could have been.

Take the time to try Echo Generation for yourself as it launches on Xbox Game Pass on Thursday, October 21st.

If you enjoyed this review please check out some of my other work, like my review of The Artful Escape!