QUBE Remake One We Didn’t Need, Or Do We? Deadpool Joins Marvel’s Midnight Suns In DLC Football Manager 23 Finally Gets PS Release Date Over 100 Side Quests In Hogwarts Legacy Is a Smaller PlayStation 5 on the Horizon? I’ll Wait and See
There’s no question that Old King Allant in Demon’s Souls, can lead to frustration, so hopefully, this guide can help you defeat him.

You’ve made it. Hours upon hours of dying and slaying demons have all led to this moment. Old King Allant, the man responsible for the emergence of the Old One. The man responsible for the fog that engulfs the land of Boletaria. After you’ve defeated the first 3 bosses in the game’s first Archstone, the path to the King’s Tower will open. Once you reach the end of this level by ascending the said tower, you’ll be met with a chilling cutscene. The cutscene sets the mood by presenting the king, sitting perched, overlooking the chaos ensuing throughout his kingdom. Then, the camera zooms as he takes off his cape, raises his sword to approach you. The ensuing atmosphere is immaculate. A booming orchestral theme plays in the background of a torn and broken down throne room. With a King fallen so far from grace, decked in white robes and wings made from the air itself, walking to meet you. The stage is set for a truly epic battle. Firstly, King Allant without question is one of the hardest bosses in the game. But, he’s fairly manageable if you can approach the fight correctly. 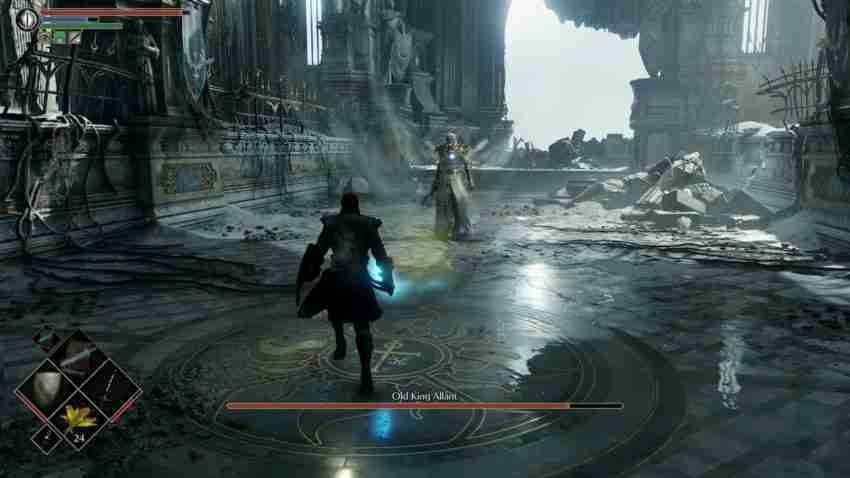 A Guide on How to Deal with Old King Allant

First and foremost, patience is your greatest virtue when fighting Allant. More so than the other enemies you’ve encountered up to this point. He can move clear across the room with ease, so even keeping distance doesn’t make you 100% safe. You will know he’s about to do this whenever he points his sword up towards the sky. To combat this, roll directly into these attacks that see him gliding towards you. Once, you’re behind him, you want to hit him at most twice, then immediately back away. The key to this fight is maintaining distance after you find openings. King Allant has an ability called the Soul Sucker and you’ll know it’s coming when his hand glows blue. Essentially, this ability can drain away a whole level from your character that you can’t get back. Suffice to say, it’s extremely dangerous and should be avoided at all costs. Next, the King also has an AOE attack. In essence, you will see him prepare to stab his sword through the ground to initiate the attack. Now, there are 2 ways to stop this. You can either run at him and attack to interrupt him or you can run the hell away from it. If you do get hit, expect to lose a massive amount of health. Again, you need to make sure that you’re not greedy here. Being too overzealous with attacks could leave you close to the King for too long, thus leaving you open for his Soul Sucker attack. This inherently means the fight will go on for a bit. But, if you can balance keeping a safe distance while only jumping in every so often, you’ll defeat him no problem. And hopefully, this guide for defeating King Allant in Demon’s Souls helps in that defeat.
What’s your Reaction?
+1
0
+1
0
+1
0
+1
0
+1
0
+1
0
+1
0
Facebook Twitter Email
👁️ 439