QUBE Remake One We Didn’t Need, Or Do We? Deadpool Joins Marvel’s Midnight Suns In DLC Football Manager 23 Finally Gets PS Release Date Over 100 Side Quests In Hogwarts Legacy Is a Smaller PlayStation 5 on the Horizon? I’ll Wait and See
Remedy have decided to release a new edition of Contro launching this year. It brings the base game as well as the 2 expansions. Control Ultimate Edition has a new trailer which can be seen below. An announcement was put out today by Antonela Pounder who’s the Senior Brand Community Manager at 505 Games. The announcement was put on the games website.

We’re excited to unveil Control Ultimate Edition, the complete Control package (featuring The Foundation and AWE expansions) coming to current gen and next gen consoles, as well as PC. And when we say PC, yes, we’re also talking about Steam! Our community have been keen to know more about the Steam edition of Control for some time now, so we’re thrilled to finally be able to talk about it. Check out the trailer below as well as a handy little FAQ guide. We know many of you will have additional questions and we’ll look to cover them in a future blog.

However when we browse the FAQ provided it gives bad news if you already own the game. As the edition out now is not eligible for a next gen upgrade to Xbox series X or PS5. 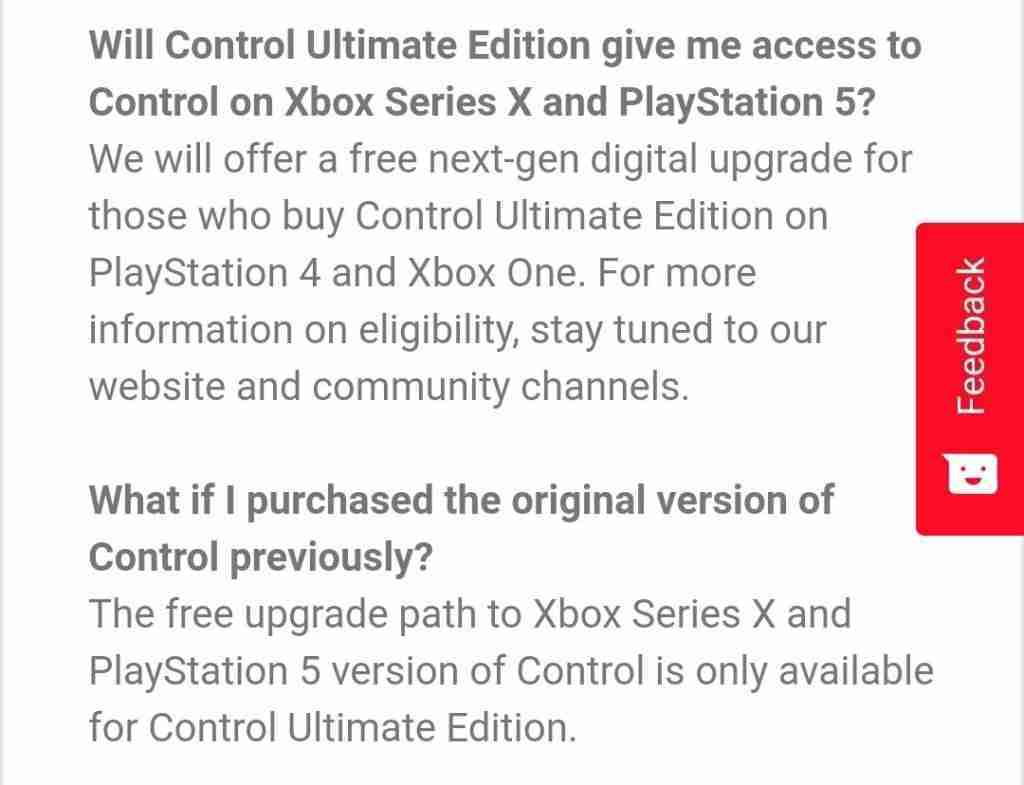 If you want to have your next-gen systems get the best out of the game you have to buy the ultimate edition, even if you already own the game.
If you are thinking of purchasing the price is $39.99/£34.99/€39.99 and will be available on the following
The Steam launch is fairly close launching on 27th August. Other editions have slightly different release dates.
Epic Game Store, PS4, and Xbox One digital copies are launching on September 10th and end of the year for PS4 and Xbox One physical copies and the digital copies for PS5 and Xbox Series X.
If you want a physical copy for next-gen systems then they are scheduled to launch early 2021.
The biggest talking point will be locking the next-gen upgrade to this new edition. This news will likely upset people who already own the game and both systems recently had on sale.  We mentioned that Control was getting next-gen support here but it was expected to be a free upgrade similar to likes of Cyberpunk.
What’s your Reaction?
+1
0
+1
0
+1
0
+1
0
+1
0
+1
0
+1
0
Facebook Twitter Email
👁️ 29