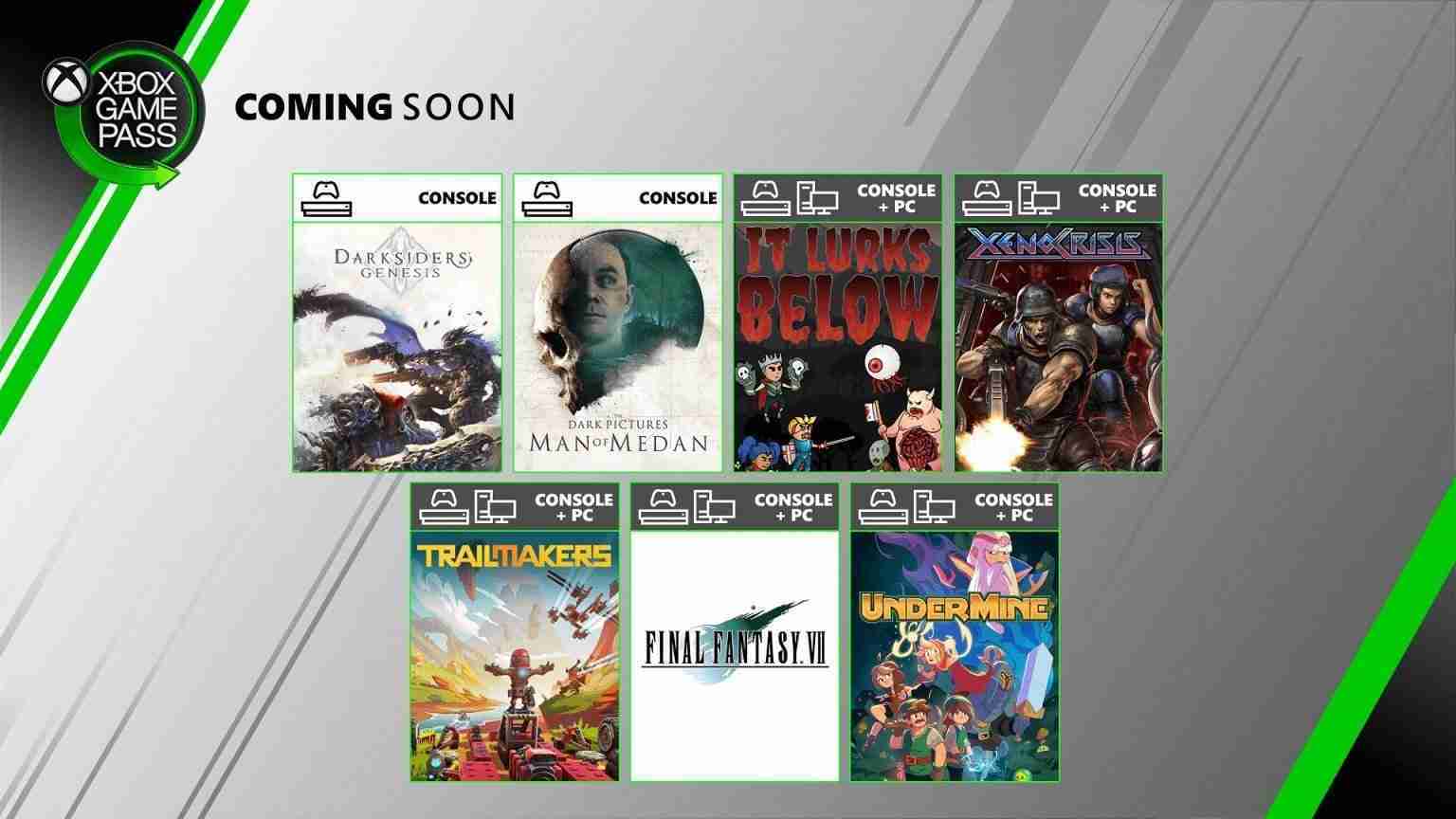 Darksiders: Genesis (Console) – August 6
An action/adventure game that tears its way through hordes of demons, angels, and everything in-between on its way to Hell and back with guns blazing and swords swinging. Genesis gives players their first look at the world of Darksiders before the events of the original game. Furthermore, it introduces the fourth and last horseman Strife, as well as co-op gameplay for the first time in the franchise.

It Lurks Below (Console & PC) ID@Xbox – August 6
The world is being slowly corrupted, and you have awoken from a terrible dream. Create a customized character and choose from several different classes to delve deep into the mysteries of what evil lurks below. Dig down and explore the randomly generated levels, find random items, and combat deadly monsters to get the answers in this retro-styled, 2D, action-oriented, survival RPG by David Brevik.

The Dark Pictures Anthology: Man of Medan (Console) – August 6
Five friends set sail on a holiday diving trip and as the day unfolds, a storm rolls in and their trip soon changes into something much more sinister. Who will live? Who will die? It’s up to you and the choices you make. You can also share your terrifying story with a friend online or go for safety in numbers with the up-to-five-players offline “movie night” mode.

Trailmakers (Console & PC) ID@Xbox – August 6
Build an amazing vehicle out of blocks and explore an alien planet in Trailmakers. This physics-based action game lets you build anything from hypercars and helicopters to hovercrafts and hydrofoils. Play solo or with friends in huge sandbox maps or perfect your race car to perfection in the Trailmakers Rally.

UnderMine (Console & PC) ID@Xbox – August 6
Delve deep into the UnderMine and discover its secrets, one peasant at a time! UnderMine is an action-adventure roguelike that blends combat and dungeon crawling with RPG-like progression. Mine gold, die, upgrade yourself, and try again! Challenge dangerous bosses and rescue helpful characters that supply new upgrades for your adventure. Decipher the cryptic messages of the UnderMine’s residents and unfold the mystery at the heart of the dungeon.

Xeno Crisis (Console & PC) ID@Xbox – August 6
Run and gun your way through seven distinct areas and master an arsenal of ten different weapons as you take on thousands of varied adversaries in this top-down arena shooter for one or two players. It will require guile, composure, and good judgement to have a chance of reaching the final showdown. Xeno Crisis is a genuine 16-bit throwback for those who enjoy a challenge, with superb pixel art and a blistering soundtrack.

Final Fantasy VII HD (Console & PC) – August 13
Relive the RPG that redefined gaming. The world has fallen under the dominion of the Shinra Electric Power Company, a sinister corporation that has monopolized the planet’s very life force as Mako energy. Cloud Strife, a former member of Shinra’s elite Soldier unit, now turned mercenary, lends his aid to the rebels, unaware that he will be drawn into an epic battle for the fate of the planet, while having to come to terms with his own lost past.