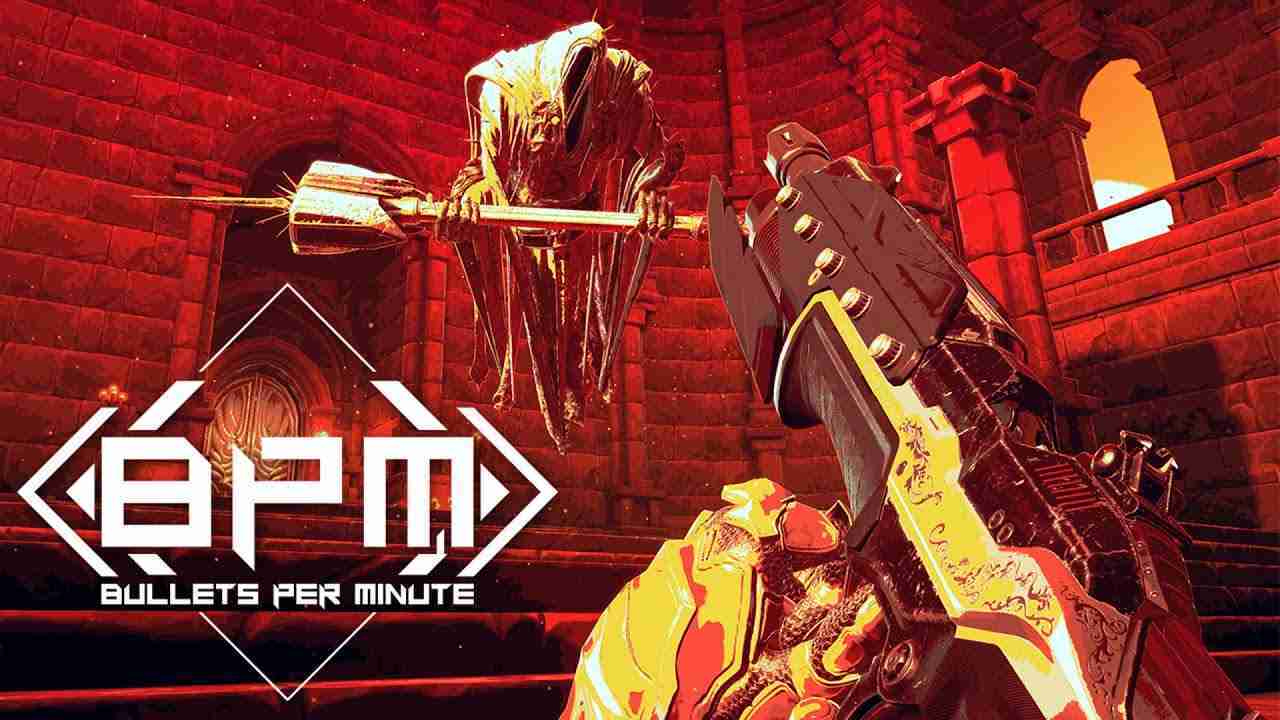 BPM: Bullets Per Minute is an interesting game in the sense that the elevator pitch sounds bizarre.  Based on my playtime with the game, I would pitch it like this – Imagine if Doom were a roguelike dungeon crawler but you can only shoot like you are playing Dance Dance Revolution.  So do I have your attention? Here is my review of BPM: Bullets Per Minute developed and published by Awe Interactive.

Bullets Per Minute doesn’t really have a story in the traditional sense, at least not one you can get from the gameplay.  This is a throwback to the original NES and SNES day where you get the story from the user manual.  The same is true here as you only know the story from the marketing material.  Asgard is under attack by monsters from the underworld and it’s up to you as the player to play as a Valkyrie to defeat the evil forces.

The game consists of the player exploring a level and clearing rooms of monsters, collecting currency/keys, upgrading weapons/abilities, and fighting a boss.  That is the loop in a nutshell and although it may sound simple, it’s much easier said than done, also, it is oddly addicting.  When the player spawns, the room is clear and there are no enemies. It is then up to the player to decide where to go. Luckily, there is a mini-map on the top left corner to help with the navigation.  Players can opt to disable the mini-map in the game’s settings.  The mini-map has symbols to help call out waypoints such as an item shop, a library, a bank, and the level’s boss among other things.  Generally speaking, those rooms are few and far between as a majority of the rooms are filled with enemies that the players need to clear.  Once cleared the player is rewarded with a treasure chest and it can include a random thing from currency, a key, health, a weapon upgrade, an ability, or a stat modifier.  Once a room is cleared the game will remember that it is cleared so the player doesn’t have to clear the same room twice.  Now the player doesn’t have to clear the whole level before fighting the boss but it is encouraged for the player to buff up before facing off against the boss.

The shooting and reloading can only be done on a beat.  In the middle of the screen, there is a visual metronome that allows players to see when the action is allowed to take place.  By timing gunshots and reloads to the metronome, it actually blends the sounds of the gunshots to the rhythm of the musical score/soundtrack making them seem as if the developers intended for the player’s gunshots to be a part of the soundtrack. Now if the player can’t keep with the rhythm and finds it difficult or cumbersome then the feature can be disabled in the setting and the player can shoot and reload freely but it does take away from the experience as the game wasn’t made with this in mind.  After trying it, the game didn’t sound the same and it made the game easier and less satisfying to play (also the game takes away the score multiplier if you disable the rhythm shooting).  Also side note, since the game doesn’t have a tutorial, for the first two hours of me playing the game I was only shooting to the beat of the music and I didn’t know about the metronome so you’re welcome.

The game only has 8 levels but good luck getting the 8th level as it requires an immense amount of skill to just beat the first level.  This is the kind of old-school game that doesn’t hold your hand or cut the player a break.  This is the kind of game that stomps the player first and then gives the player the opportunity to build themselves back up, and this all in easy mode! Nevermind hard mode.  There is no tutorial in the game and the game doesn’t tell players everything, just enough to get them going.  There is no save slots either, this game is based on having a good run so you can’t just save the game and pick it up later.  There is a drawback to this approach.  If the player were to make it to the 4th level and has upgraded their health, their gun, their stats, their abilities but then dies, well, they have to start all the way over at level 1 with none of the buffs they gained. They can’t just reset to level 4 unfortunately.  Some may think of it as BS but the developers made the game like this intentionally.  The game is a rogue-like so even though you are starting from square one, you also have a brand new level generated for you, which means the upgrades will be different.  Side note, one of my runs was very heartbreaking because I had an armor piece that regenerated my health for me and I had an ability that automatically cleared a room but I could only use it on a timer and it was the worst feeling having to lose a great loadout.

If somehow you manage to beat all 8 levels then there are two other things to keep the player’s attention.  First, there are 4 other valkyries to unlock and play as these valkyries have a different default weapon and default stats.  The other is a challenge mode (side note the developers put a note saying more will come if they can afford it).  Interestingly, one of the challenges is playing the first level but in the style of a SNES de-make in the vein of Doom on the SNES.

The game runs at a maximum resolution of 1080p (sorry no 4k support) but it does support high frame rates of 120, 144, and 200 frames per second (as well as the standard 30/60 fps).  I chose to run the game at an uncapped frame rate and it was buttery smooth which is how a first-person shooter should feel like.  The game’s visuals are definitely inspired by the modern Doom games and despite being an indie studio with a smaller budget they managed to pull off the look and feel.  There are fluid animations, well-textured environments, and precise/responsive controls.

During my playtime, I did run into two EXTREMELY and VERY minor visual glitches that didn’t affect gameplay at all and it might not even be worth mentioning.  The two instances involved walls in a room where there weren’t textures and instead it was just blue.  They were very small and they kind of look like a peephole to look through.  The first time I saw it I was convinced it was there on purpose like a secret room behind there that I was supposed to find (also I’m convinced that it might still be a secret that I didn’t find).

What is there to say about the audio?  The audio is exquisite! Audio mixing/levels are finely tuned to perfection and the star of the show is the kick-ass rock soundtrack. ‘Nuff said.

BPM: Bullets Per Minute is a game that is all about “being in the zone.” It’s about getting to that flow state.  There were times where after my run ended my eyes were bloodshot from not blinking.  I thoroughly enjoyed this game and while I don’t agree with every decision the developer made for the direction of the game (i.e. no tutorial, no save slots, dying and starting over) the game held my attention and made me want to live up to that competitive mantra of “get good scrub!”  This is easily a recommendation for me.  8/10.

BPM: Bullets Per Minute will release on PC (steam) on September 15th, 2020 with a console release later in the winter.

Review code provided by the developer/publisher for purposes of review.

For more indie reviews check out our review for Bounty Battle.