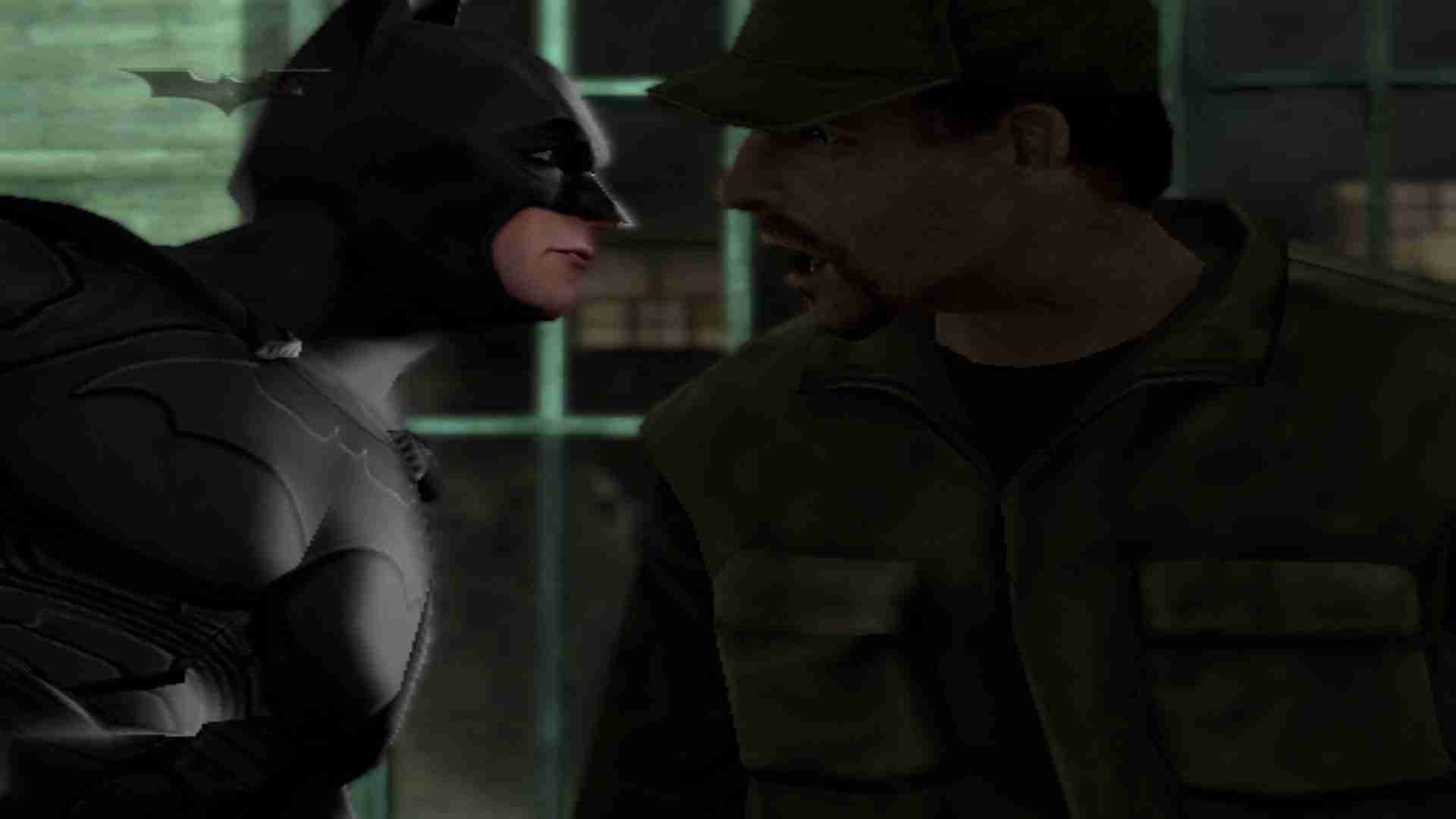 The only thing intimidating about the 2005 Batman Begins The Game is the absolute lack of replayability and the camera that wants to ruin your day. I remember going to Rogers videos around the corner which was a Canadian blockbuster (and yes we did also have Blockbuster) and renting this game after watching Batman Begins for the first time. It was finally back in stock one weekend so I rented it out and strapped in for some Batman goodness still high on the movies sheer awesomeness. 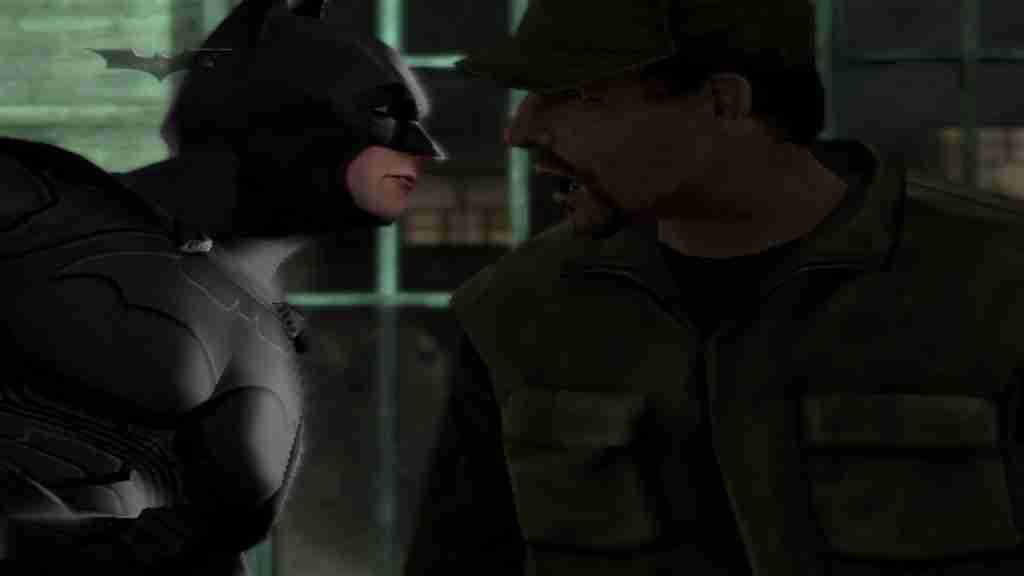 Released 1 day before the movie bearing the same name, this game is an average superhero movie tie-in game like so many that we have seen before and since, and it’s only average from the nostalgia factor. I can assure you if you have never played this game before you would have no love for it and will look at me like I’m crazy leagues better than games like Superman Returns from 2006 but nothing close to the later Batman Arkham series. Developed by Eurocom and published by EA in conjunction with Warner Bros. Interactive Entertainment and DC Comics and released on the GBA, GameCube, PS2, and Xbox. There was also a PSP version of the game planned but due to the lukewarm reception, it was canned.

The GBA title is a decent game like most of the games from that era on GBA; it’s a side-scrolling beat em up. Although it can be difficult in some spots it still follows the telling the movie plot that the big console games have with some variation for the handheld market.

The game is basically the movie with some minor changes to the ending but longer although not by much. Topping out at only 6.5 hours for me since I seemed to burn through it especially when I saw the very little replayability which is a shame because it does employ some pretty memorable and maybe could have rivaled the Arkham games if some more time was spent. Batman Begins reprises the roles of almost all the characters except for Gary Oldman.

Due to the less than stellar reaction to this game the second game The Dark Knight was canceled. The next Batman game was a Lego Batman which is pretty fun but I have yet to meet a Lego game that isn’t enjoyable. Batman: Arkham Asylum the next non-Lego Batman title was the game I wanted this to be and it could have been but Batman 2005 had to walk so the Arkham series could run and become one of the best video games hero series. Vast exploration, dynamic combat, cool characters, and fun gameplay overall. Arkham City what this game should have been.

First, the thing to note is I am running this on an emulator PCSX2 v.1.4.0 with my own settings and options for my build, and the way the game likes to run every game is different just like every system is. While not the worse looking ps2 game out there it’s not winning any awards in that department again that can be the settings I had in the emulator. Most of the game is told through the movie cut scenes which happen fairly often almost like a reminder that it is a tie for Batman Begins. The main character models look decent with a good amount of detail, Batman, of course, is the most detailed model in the game. The NPCs consists of maybe 6-9 different models just repeated even then I might be inflating that number. They are just cannon fodder for The Bat. 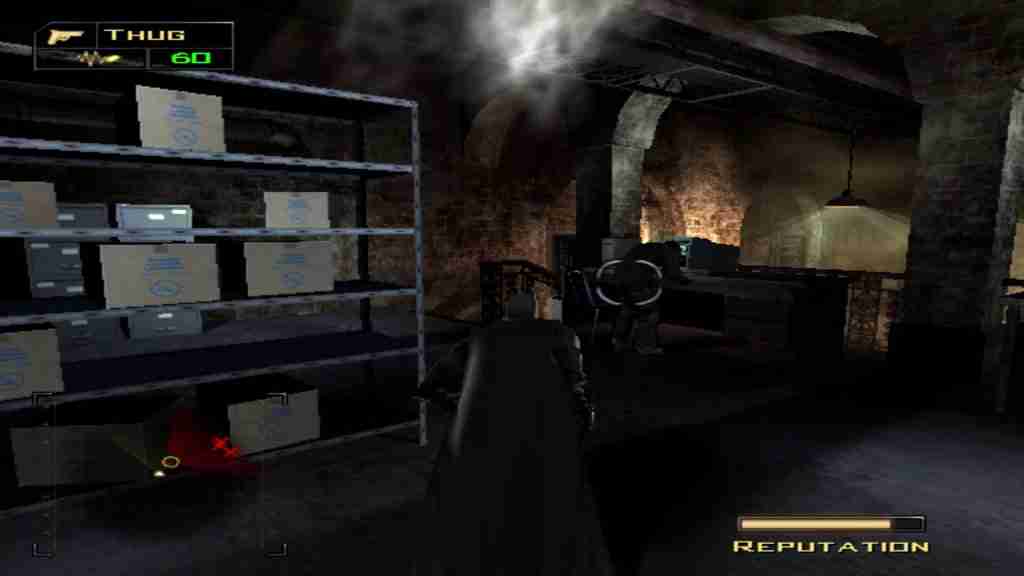 Animations are ok at best, the climbing and fighting are off and a little stilted. The main star of any batman game Gotham might as well have not been there it’s all generic background textures and forgettable areas that are seen to fast to have anything memorable. The only area that could be memorable is the quick Arkham Asylum trip even that is a generic hospital-like area with repeating corridors. There was just not enough time to do all the things that could have been done here.

There is a heavy reliance on basic button-mashing combat which is fine who doesn’t love a good button masher every once in a while. But with the hitbox detection being spotty makes it nigh artificially hard to land good blows and provide good blocking all with no smooth flowing combat or combos either. Although It does have “finishing moves” although I say that lightly as Batman doesn’t kill anyone, they wouldn’t look out of place in Mortal Kombat or Injustice, especially the fear ending one but they are pretty random to trigger. The auto lock-on is frustrating it zooms in limiting your peripheral view so you can’t see anyone around you or behind you which often leads to getting hit by other baddies, while you fighting with the camera, and if you face off against an armed enemy it’s almost instant death. Most gadgets can’t be used in combat freely, only the grenade types like smoke bombs and flashbangs are allowing in normal combat situations. Grenades along with health kits are the only in-game pick-ups. This 2005 throwback has a unique system involving intimidation using Batman’s gadgets to frighten enemies making a difficult fight easier, Much like we would come to see in later Arkham games with the x-ray fear level scans.

By far the 2 best sections in the game are the tumbler race against time missions. It comes in black and handles really well.  Although there are only two burnout style missions involving the rolling tank they are spaced out well in the game to not make them overused, it wouldn’t be until 10 years later with Arkham Knight that we would really get any kind of vehicular combat again. I really felt like I was fighting with the camera a lot which makes seeing what you need to jump to frustrating and makes me miss jumps often. While the platforming isn’t too bad the puzzles are hand-holding simple which since this is a linear game is a little disheartening. A variety of puzzles could have added some body to this simple game. 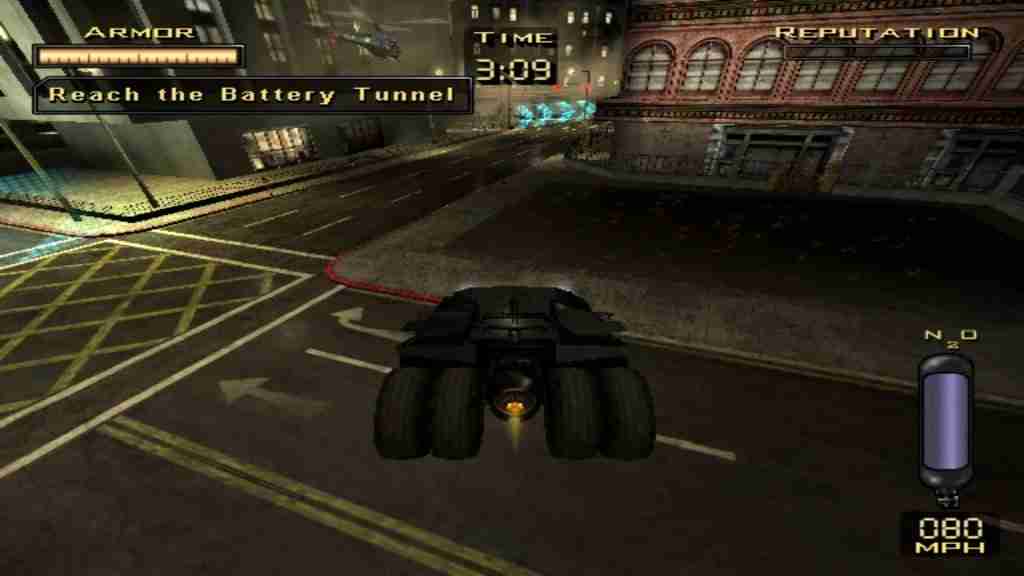 The camera wants to look at what it wants and is probably the biggest thing you’ll have to fight the entire time. There’s no sprint which to me personally is annoying considering there is a lot of running to one point get something or someone and come back. No upgrading or leveling up means no cool features and other add ons to unlock as you play the game. The one thing that you really want to have in a Batman game is gliding (aside from smooth combat) and this game has no actual need or uses for gliding mechanics. The gliding does not feel like it should be in the game or at all useful in the slightest.

In-game world collectibles are down to a total of zero which means no Riddler trophies yay! I still have flashbacks to the Arkham City trophies! The map design is empty backtracking filled corridors that remind me of a school during summer. They could have filled it with some collectible, easter eggs or a bit more thought out design but one corridor will look like the next. The linearity of the game really draws attention to that fact. It’s a hardwired move for most gamers to check every corner in case there is a goodie or drop but there is truly nothing in this game. IT’s always sad to go down that long corridor thinking logically there is something there when nope just empty and now you must spend all that time going back.

As you play you naturally unlock time attack modes and the ability to replay the tumbler missions again if you wish. There is also a Gallery of fear which houses the animated models of various people Batman has fought throughout the game as well as an alternate costume selection screen that has 4 other Batman costumes. Along with that, you unlock movie clips and interviews from the Batman Begins movie. Everything is unlocked with a single playthrough which really kills replayability.

Most of the music sounds like its pulled from the movie soundtrack or something similar to the grand orchestral feel and tension creating additions throughout. The biggest thing to remember is that this is a tried and true movie tie-in game so everything follows a formula including music. An out of left field addition to the soundtrack was the tumbler driving sections, it’s a weird techno mix that really has no place here it more belongs in a need for speed game.

The voice acting is just the definition of a rushed job. This definitely sounds like this was some contractual obligation instead of wanting to do this anything for this game. Most of the lines are from the movie but some are game exclusive. It feels like this was the first time a lot of them read their lines and didn’t have time to give it more then one go around. Which is a shame this game could have had so much love and time put into it. 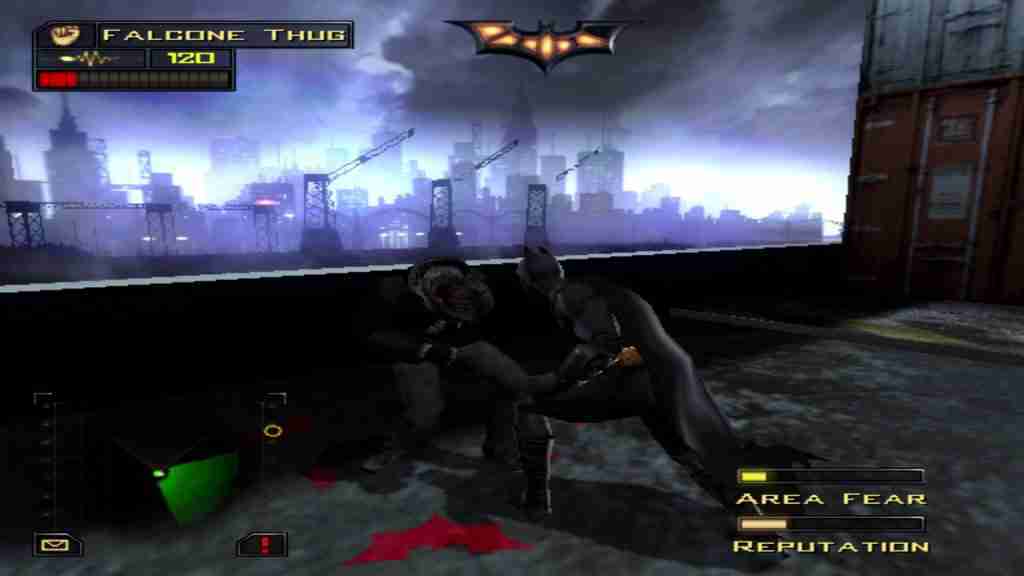 Batman Begins is a lot like Batman’s utility belt. It has a lot in it, can do a lot and looks nice most of the time… But it’s a quickly made Batman movie tie-in game, another in a very long line of them. While not overly bad it’s a very very short one and done game. This is a monotonous event, with no replayability, no collectibles, and nothing to do outside the story-based missions. Everything it’s a nostalgic trip more than anything especially when the Arkham series does a lot of what this game does but way better. You may say it’s not fair to compare 1 to the other but it’s almost impossible not to.

The combat is frustrating, the gameplay is uninspired, and if I wanted to watch that many cut scenes from the movie I’d watch the movie. Personally, now that I’ve finally replayed it I don’t see myself ever coming back to it. it could have had so much done to it with maybe some extra time. The movie was a masterpiece and this could have been as well. As luck would have it we would get that game we deserved when the Arkham series was brought to us. It’s a blast from my gaming past that should have stayed in the past. This feels like it’s a default game that could have been any stealth puzzle game without the Batman name.