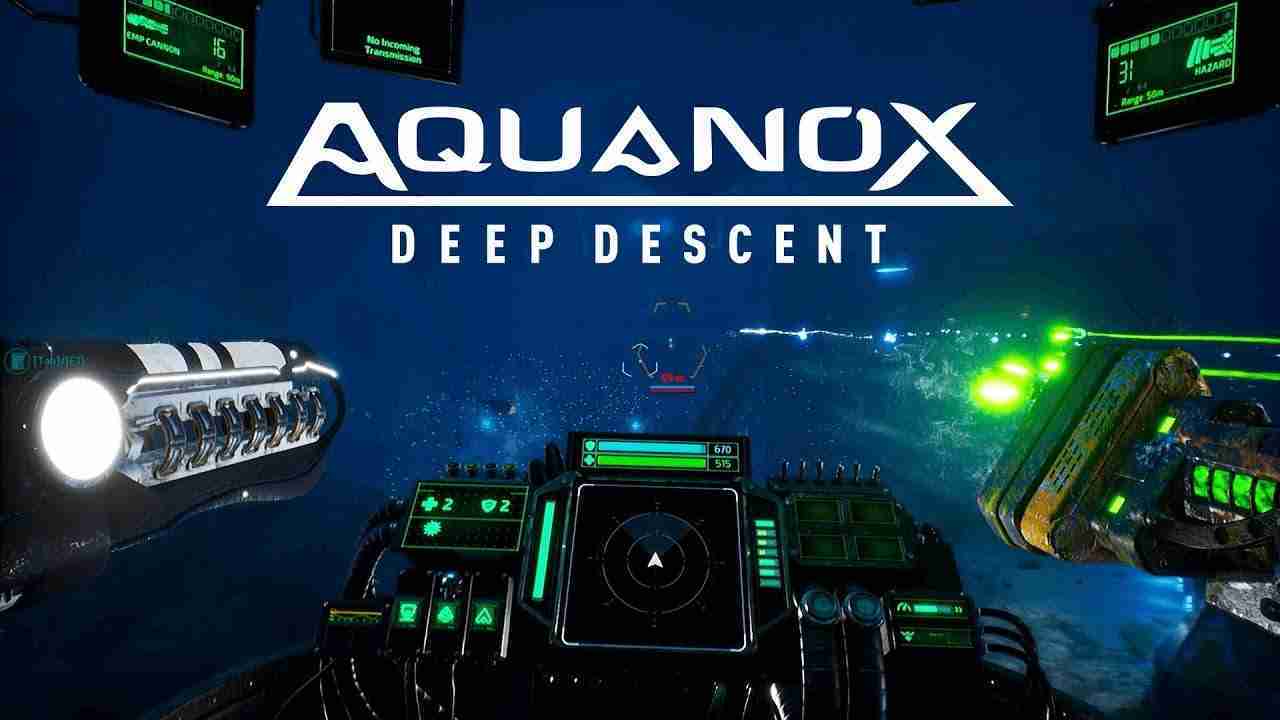 Aqaunox Deep Descent is a re-imagining / reboot of a game franchise that started in 1996.  The series has remained a PC exclusive franchise thus far and with this latest entry, continues on with the tradition.  The game was successfully crowdfunded via Kickstarter and developers Digital Arrow even threw in some nods to the other games in the franchise without alienating newcomers.  Here is my review of Aquanox Deep Descent, published by Nordic Games.

The story has you playing as a crew of four people piloting a submarine after waking up from cryostasis in the far future.  The characters don’t have memories of their past lives before the apocalypse.  This is a perfect vehicle for the player to experience the world through their eyes and the player can acclimate to their surroundings just as the characters do the same.  The world was flooded and humans have been living their lives in submarines and underwater facilities that were constructed.  The remaining people have clustered together under various factions that are at war with each other over control/resources.  The story revolves around the four characters trying to remember their past as it might be a key to figuring out what caused the apocalypse and possibly saving the world.  The crew meets various people along their journey, doing favors for every faction they meet along the way.  Even some NPCs that you meet are credited to Kickstarter backers with in-game text stating that the character was named by backers.  The story isn’t really anything special as a lot of character development is done by in-game text stating that a character was an ex-mercenary or a defector, etc.   Also, the developers rely on stereotypes/cliches to message to the player the hard lives people have lived through.  Even the crew the player plays as are two-dimensional archetypes from the scientist, the assassin, the former pirate, and the veteran and that’s all you need to know as far as character development goes.  The game’s story is a bit uninspired because I was able to call the ending and all the reveals well in advance (including a Stars Wars-like moment that I predicted would happen) and I’m not that good at doing that so it should be telling that I was able to see where the story was headed.  Although, because I’m not familiar with the past entries in the franchise there is an extra cutscene at the end of the game that centers around the protagonist of the first two games in the series and then namedrops the protagonist of the third game.  Also, there is a side mission where the player rescues the protagonist of the first two games but the character is still a young boy so that’s a nice nod.

If there is one word to describe this section it’s repetitive. The gameplay loop does nothing new after the first 30 minutes of the game and it took me 14 hours to beat the game.  So it was definitely monotonous.  The game’s campaign has you doing the same three missions over and over again from following the ship, destroy the enemies, protect this NPC(s).  There is no mission variety which could be a limitation of the genre since the game is a submarine simulation game of sorts so underwater dog fights make up the bulk of the game.  The game is straightforward as early on the NPC tells you about the in-game economy and tells you how to buy upgrades.  As the player you need to constantly look for scraps at the bottom of the sea, luckily there is an in-game radar that tells you where the scraps are and it’s a bit frustrating to have the player scan the wreckage first before collecting the loot.  The loot and currency that you gather can be used once you dock at a station you can use resources to craft ammunition and/or buy weapons and upgrades to your ship and you can get access to more than one ship but you can only pilot one at time.  Each ship has its own strengths and weaknesses, you can pick a ship with a lot of shield and health to be a tank and not die as easily but in exchange, you lose out on speed and maneuverability or you can pick a small/fast ship but lose out on health/shield.  There are a total of six ships that runs the gamut of specializations and I tended to stick with the bulky ship to allow me to live longer.  There are two shout-outs I want to give in this section the first is the UI – the player plays in a cockpit view and the game’s UI is built into the ship’s design so that was well done and it looks natural to the gameplay.  The second is one story mission where the player races against an NPC.  It’s the only mission of its type and was definitely a much-needed break from the same missions, it’s too bad that it occurred over halfway into the game.

The game has multiplayer but I was unable to experience any of it during the review period.  I was playing the game after the game had launched and I found zero lobby of deathmatch available to play.  So I just imagine that the game has the player choose a faction and fight PvP.  The other online multiplayer option is online co-op.  The game allows for up to 4 drop-in/drop-out co-op multiplayer where the single-player campaign can be tackled together with friends.  I did manage to find two lobbies of people playing that way but both lobbies were private lobbies that were password-protected so I wasn’t able to enter someone else’s session to test things out.  Ultimately, this game might not be popular enough to have a robust only multiplayer scene.

The shining beacon in this game was its art direction.  The graphics were top-notch and I experienced no glitches throughout my playtime.  It appears the most amount of this game’s budget went towards making this game look pretty and it shows.  Although the game doesn’t have any CGI cutscenes or 3D character models, instead it employs storyboard animatics, the kind you see in making-of documentaries of movies.  It feels like a shortcut but it was serviceable.

The audio was nothing special.  I’m already starting to forget the game’s music even as I write this.  The game does feature voice acting but only for principle characters.  Most NPCs only have one grunt of dialogue before going full text-based interactions. The voice actors really tried to put emotion behind the dialogue and I’m happy that they tried but this game’s way of telling the story doesn’t help it.  Side notes there were two times by my count where the voice actor’s script was off by a word that the in-game text says which is more of a nitpick than actual criticism.  The last thing I want to say on this subject is the combat music is always the same which has a bit of an EDM/(insert DJ name here) vibe to it which doesn’t make sense when the combat encounter has the player fighting sharks.  I don’t ever see a world where that the score a Jaws movie would go with.

Overall, the game didn’t offend me.  The game was boring throughout and the trite story didn’t make up for its shortcomings.  The gameplay was repetitive and with very few exceptions didn’t show anything new after the first 30 minutes of gameplay.  The game, while pretty to look at, had taken a step back in the cutscenes department opting for an old school approach of RPG dialogue boxes that don’t fit the modern look the game was going for.  I would classify this as a mediocre game and so I give it a 5/10.

The review code was provided by the publisher THQ Nordic & Developer Digital Arrow for the purposes of review.

Reviewed On PC via Steam.

For more PC games check out our reviews for Fallen Angel and BPM: Bullets Per Minute

Review: No Straight Roads (Xbox One)