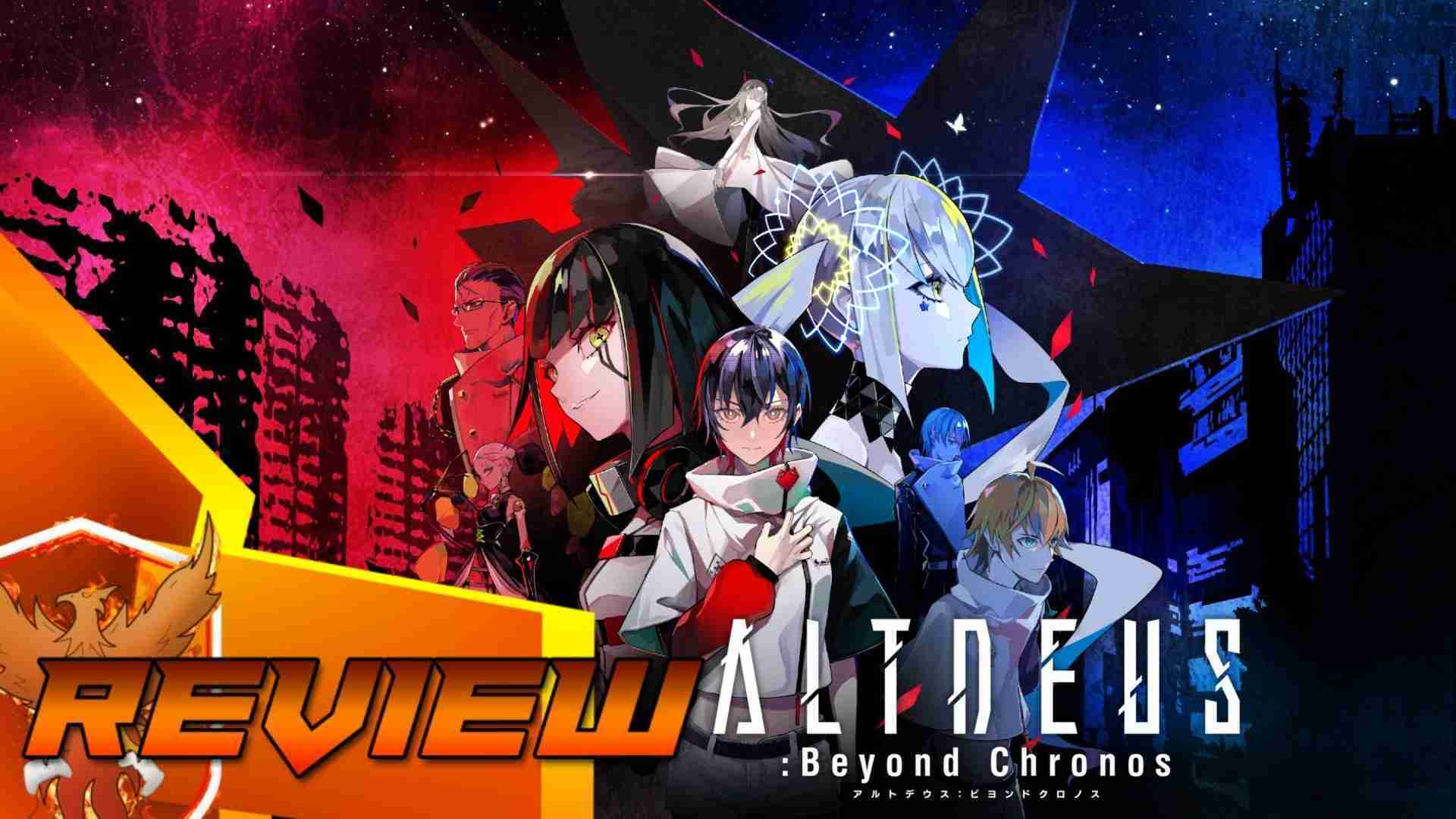 ALTDEUS: Beyond Chronos is a visual novel developed and published by MyDearest. The game had initially launched on Oculus Quest and Rift and had since released on Steam and is now making the transition to PSVR. ALTDEUS: Beyond Chronos is actually a sequel to a game called Tokyo Chronos, although that didn’t matter for me since the sequel is set 200 years after the events of the first game and all the context needed for newcomers to enjoy, are provided during the game. So is this game a must-play for VR owners? Read on to find out.

What is a visual novel without a story? This is easily the strongest category for the game. I would like to start out this section by saying that this game is Anime AF! And I’m living for that! This game has all the tropes for a good anime including anime waifus, a kickass anime theme, and most importantly – juicy anime betrayals!

Without spoiling anything, all you need to know is you, the player, plays as Chloe, a genetically modified super soldier, working for a military organization called Prometheus. It is the year 2280, and Chloe is tasked with piloting a mech called a Makhia, and protecting a city from giant kaiju called Meteoras. All this plays out while she is dealing with a personal tragedy that influences the story that features a well-written cast of characters. That’s pretty much the game in a nutshell. The game definitely has so many inspirations taken from so many other forms of media – Neon Genesis Evangelion and Pacific Rim come to mind.

As trope-y as this setup sounds, it’s the execution that puts this game at the top. Since it is a visual novel there is player agency built into this game and it’s almost like you (the player) are in an anime with free will to make decisions about where the story goes. There were a lot of times where I had to ponder of whether or not I should lie to a character or if I should disobey an order. This game has branching narratives and multiple playthroughs are required to get all the endings including the best ending. I also love that this game has a framing device built into the narrative that allows for all your playthroughs to be “cannon” making it so Chloe can remember facts that she obtained during a previous playthrough. That is amazing, the developers weren’t going to just be content with having players play the game with multiple runs with Chloe making decisions with the information she shouldn’t know, so instead, they make it a part of the narrative and deliberately open new branching paths and I applaud the thought MyDearest put into it.

The only bad thing I will say about the story is Chloe, as the protagonist, she starts the game with a chip on her soldier and she is a real Debbie Downer, she is very sad and early on in the game she brought the mood down at a pizza party and it definitely felt like the supporting cast were the likable ones and not Chloe. But bad first impression aside, Chloe grows over time with the plot pushing her resolve, and the flashbacks that were sprinkled in throughout really fleshed out her character.

The music/soundtrack for this game is unrivaled! One thing every great anime has is a memorable soundtrack by its side. Think about it, part of what made people get pumped up when watching Dragonball Z is the soundtrack and theme song. When I watch Attack on Titan I don’t fast forward through the opening theme because it is so good! So when I tell you that this soundtrack is on par with those two, just know, I do not say that lightly.

From the start of the game, the game immediately starts to pull you into the world with its music. The player hears very beautiful and melodic tunes featuring an acoustic guitar and a piano. When the game transitions to the mech battle action, the music becomes bombastic and epic. I really love the music in this game, there was even a scene where one of the characters told you to listen and it really drew attention to the soundtrack for me, even though the characters in-universe aren’t hearing the soundtrack, I can’t help but think that the line was put in there for both purposes and it worked for me.

As a plus, the game features both English voice acting as well as the original Japanese voice cast with English subtitles for all those that like the truly authentic experience (ie subbed not dubbed). Also, the developers know what they had with their music because they went ahead and added VR concerts in there as well.

Lastly, I want to give a shout-out to the theme song that they made. It was the only part of the game that they displayed in what I would describe as “theater mode” where it was a 2D image displayed in a rectangle box like you are watching it as if you were in a theater and the animation was beautiful and the song accompanying it matched the tone. Then the drop in the song happened and suddenly the music was loud and fast-paced and theater mode was thrown out and suddenly the theme was in 3D and it was one of the most breathtaking moments I have ever experience. I was in total awe as I have never experienced a fast-paced anime opening in the first person like that. I know this falls more into the visuals category but really the music set the tone.

The only negative I can give is the audio mixing. There were 3 different times that I can remember (for my first playthrough) where the music was way too loud and the voice acting could not be heard. Two of those times were because of the mech action sequences and the music needed to be loud for the action. Thankfully, it is mostly a nonissue since the game has subtitles on by default.

Another shining light for this game is the visuals. I love that this game was made in VR because the developers did a great job with scale. This game really makes you feel tall when you are piloting the Makhia and also really makes you feel tiny when you are standing on the ground and a Meteora is approaching you. It was truly one of those moments where you can feel your own heart pound in your chest. What the developers can accomplish utilizing 3D space is amazing!

The game also has its artistic choices by having flashbacks be in black and white. The novelty never wore off for me but it might for others. Overall though, the game looks like an anime, think Bleach, Naruto, Dragonball, etc. The game’s art style is well-tuned for this game.

I can also happily report that there were no visual glitches or crashes, or frame drops that I experienced during my playtime. It should be noted that I played this game on the PS4 so if anything the game should be able to run smoother or load faster on PS5.

The only negative I will say is that there were several times where Chloe is walking in the city and all the citizens are far away and they looked like DS style textures kind of like The World Ends With You. Also, Chloe is supposed to work for this giant military organization but their headquarters seemed to have giant empty hallways and giant empty labs. I mean, come on! This is a big building, surely there are more than 5 people in here at a time! The game does try to lampshade this by explaining that Chloe has a filter on that lets her ignore people. So I guess I’ll let this slide.

This is the only category that doesn’t really do it for me, but it really isn’t the fault of the game. This is a visual novel and generally speaking interactive dramas such as Telltale’s The Walking Dead and Detroit: Become Human aren’t exactly known for their gameplay but rather branching narratives and compelling stories.

I personally would have liked to have seen more gameplay when piloting the Makhia but this game has a script and turning the game into Daemon X Machina to fight Kaiju doesn’t really gel well with what the game is. Instead, the game relies on simple gestures during these segments.

The gameplay is very simple, I played the game using a DualShock 4, I personally made no attempt to use the PS Move Controllers but I wouldn’t be surprised if this game supports them. On the DualShock 4, each analog stick controls each corresponding hand. Left and right on the D-pad turns you left and right. Up and down on the D-pad lets you select your dialogue choices when prompted. Square and Triangle pull up the main menu. X confirms and proceeds with the dialogue, the circle button is used to back out, and the triggers close your hands into fists.

So is ALTDEUS: Beyond Chronos the best visual novel to ever visual novel? I honestly don’t know since this is my first visual novel but I can say that I really loved this game. I am now excited for the genre and I think I’ll seek out the Dangonrompa series next because the bar is now set high for me.

I will say that VR is the perfect medium for this genre. I am no stranger to 360 video/shorts/movies and this basically turns it up a notch by adding player interaction and this goes hand in hand with viewer/player immersion.

In summary, this game has it all! An anime ass story, an anime ass soundtrack, above-board voice acting, and awe-inspiring visuals. The only thing this game “lacks” is great gameplay, but this is a visual novel and the gameplay isn’t the star of the show, the story and characters are. I think this game is amazing and is easily recommended to VR owners and if you are an anime weeb like me, I would put it in the category of must play! This game is a 9/10!

ALTDEUS: Beyond Chronos is out now on Steam and Oculus and will launch on PSVR on April 15th for $29.99. A review code was provided by the publisher for purposes of review.

YesterMorrow Review: A Unique Take on the 2D Platformer