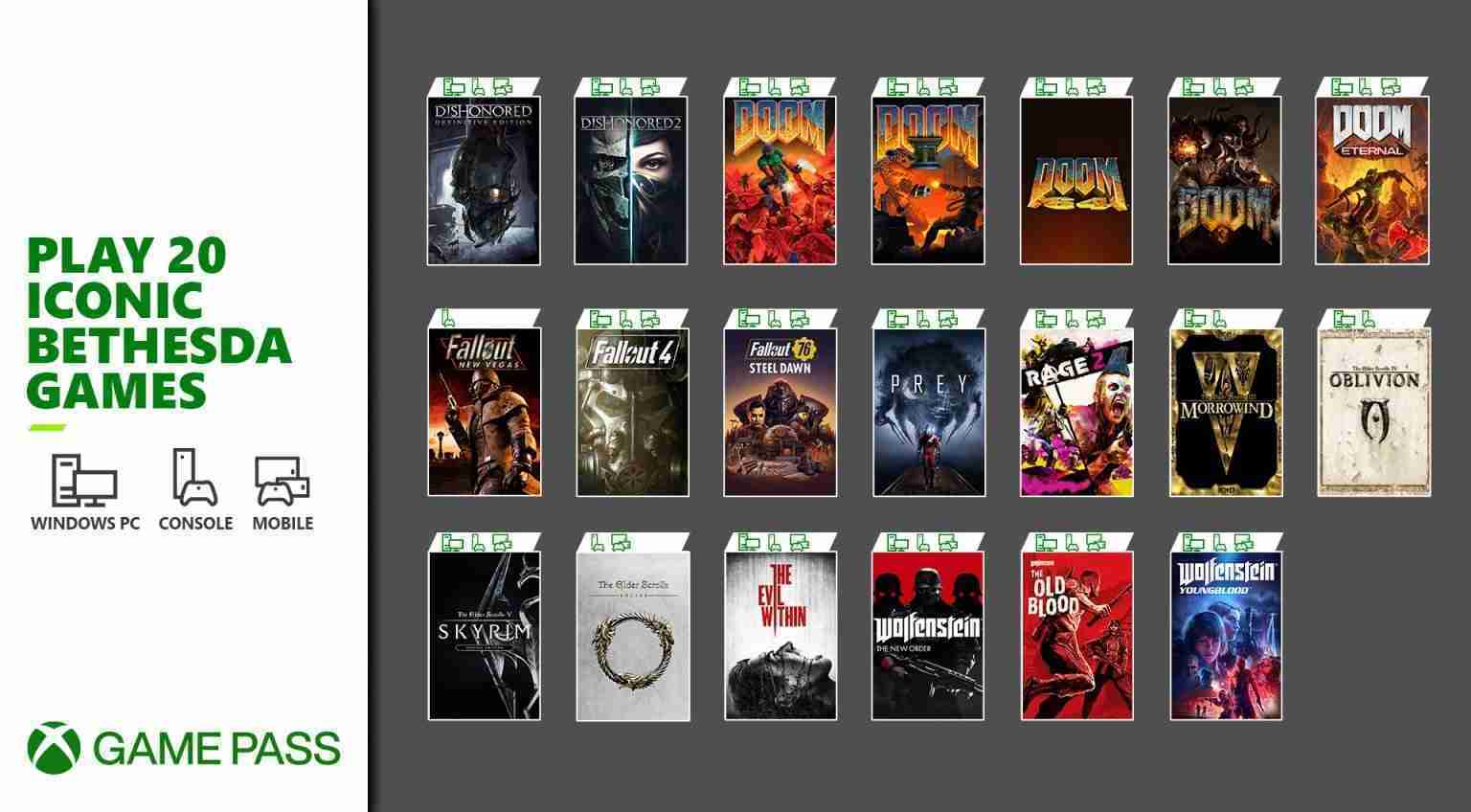 With the announcement of Bethesda officially being apart of Microsoft, Xbox Game Pass is getting a boost. Starting tomorrow 20 Bethesda games will be headed to Xbox Game Pass. Check out the list of games below courtesy of Xbox Wire.

Bethesda Games Playable with Xbox Game Pass (As of March 12)

Dishonored Definitive Edition (Console, PC, Cloud)
This complete compilation includes Dishonored, winner of over 100 Game of Year awards, as well as all of its additional content – Dunwall City Trials, The Knife of Dunwall, The Brigmore Witches and Void Walker’s Arsenal.

Dishonored 2 (Console, PC, Cloud)
Reprise your role as a supernatural assassin in Dishonored 2 – the next chapter in the award-winning saga by Arkane Studios. Play your way in a world where mysticism and industry collide. How will you combine your character’s unique set of powers, weapons and gadgets to eliminate your enemies?

DOOM (1993) (Console, PC, Cloud)
Doom introduced millions of gamers to the fast-paced, white-knuckle, demon-slaying action the franchise is known for. Relive the birth of the first-person shooter and experience the demon-blasting fun that popularized the genre. Doom includes Episode IV: Thy Flesh Consumed, with 9 additional action-packed levels and split-screen 4-player deathmatch and co-op.

DOOM II (Console, PC, Cloud)
Bring your trusty Super Shotgun and an arsenal of classic Doom weapons to bear against deadlier demons and the infamous boss, the Icon of Sin. Doom II includes The Master Levels for Doom II with 20 additional levels, as well as split-screen 4 player co-op and multiplayer.

DOOM 3 (Console, PC, Cloud)
Battle your way through a demon-infested facility before entering the abyss to battle Hell’s mightiest warrior – and put an end to the invasion. Doom 3 includes both campaign expansions – Resurrection of Evil and The Lost Mission.

DOOM 64 (Console, PC, Cloud)
Battle armies of demons in your crusade to hunt down the Mother Demon and stop Hell’s invasion. As you fight through more than 30 action-packed levels, be on the lookout for enhanced weapons and secrets to help you put an end to the demonic threat.

DOOM Eternal (Console, PC, Cloud)
Hell’s armies have invaded Earth. Become the Slayer in an epic single-player campaign to conquer demons across dimensions and stop the final destruction of humanity. Experience the ultimate combination of speed and power in Doom Eternal – the next leap in push-forward, first-person combat. The only thing they fear… is you.

The Elder Scrolls III: Morrowind (Console, PC)
An epic, open-ended single-player RPG, Morrowind allows you to play any kind of character imaginable. You can choose to follow the main storyline and find the source of the evil blight that plagues the land, or set off on your own to explore strange locations and develop your character.

The Elder Scrolls IV: Oblivion (Console, PC)
Step inside the most richly detailed and vibrant game-world ever created. With a powerful combination of freeform gameplay and unprecedented graphics, you can unravel the main quest at your own pace or explore the vast world and find your own challenges.

The Elder Scrolls V: Skyrim Special Edition (Console, PC, Cloud)
Winner of more than 200 Game of the Year Awards, the Skyrim Special Edition includes the game and add-ons with all-new features like remastered art and effects, volumetric god rays, dynamic depth of field, and more. Also bring the power of mods to consoles. New quests, environments, characters, dialogue, armor, weapons and more – with Mods, there are no limits to what you can experience.

The Elder Scrolls Online (Cloud, Console)
Experience the award-winning story in a persistent Elder Scrolls world. Embark on an adventure that lets you play your way, go anywhere at any level. Battle, craft, steal, siege, explore and more.

The Evil Within (Console, PC, Cloud)
Experience a disturbing reality as you try to break free from warped machinations. With limited resources at your disposal, you’ll fight for survival and experience profound fear in this perfect blend of horror and action. Defeat insurmountable terror and experience the ultimate thrill by discovering The Evil Within.

Fallout 4 (Console, PC, Cloud)
As the sole survivor of Vault 111, you enter a world destroyed by nuclear war. Every second is a fight for survival, and every choice is yours. Only you can rebuild and determine the fate of the Wasteland. Welcome home.

Fallout 76 (Console, PC, Cloud)
Steel Dawn is the first chapter in the new Brotherhood of Steel questline, free for Fallout 76 players. Visit settlements populated with new NPCs and unlock powerful weapons and armor from the Brotherhood arsenal. Join in their mission to rebuild society and aid in securing valuable technology.

Fallout: New Vegas (Console)
Welcome to New Vegas. It’s the kind of town where you dig your own grave prior to being shot in the head… and that’s before things really get ugly. It’s a town of dreamers and desperados being torn apart by warring factions vying for complete control of this desert oasis.

Prey (Console, PC, Cloud)
Good morning, Morgan. Prey joins the Xbox Game Pass library tomorrow, taking you from the comfort of your home to the treacherous depths of space. As Morgan Yu, you’ll have to use your wits, weapons and strange powers to fight the alien threat that has overtaken the Talos I space station. Explore the station, upgrade your skills and abilities, and uncover the secrets of Talos I and the dangers within.

RAGE 2 (Console, PC, Cloud)
Dive headfirst into a dystopian world devoid of society, law, and order. Rage 2 brings together two studio powerhouses – Avalanche Studios, masters of open world insanity, and id Software, creators of the first-person shooter – to deliver a carnival of carnage where you can go anywhere, shoot anything, and explode everything.

Wolfenstein: The New Order (Console, PC, Cloud)
Wolfenstein sends players across Europe on a personal mission to bring down the fascist war machine. With the help of a small group of resistance fighters, infiltrate their most heavily guarded facilities, battle high-tech legions, and take control of super-weapons that have conquered the earth – and beyond.

Wolfenstein: The Old Blood (Console, PC, Cloud)
The year is 1946 and the Nazis are on the brink of winning World War II. In an effort to turn the tide in the allies’ favor, B.J. Blazkowicz must embark on an epic, two-part mission deep within Bavaria…

Wolfenstein: Youngblood (Console, PC, Cloud)
Set 19 years after the events of Wolfenstein II, BJ Blazkowicz’s twin daughters, Jess and Soph Blazkowicz — after years of training from their battle-hardened father — are forced into action. Team up with a friend to level up, explore, and complete missions to unlock abilities that compliment your playstyle.